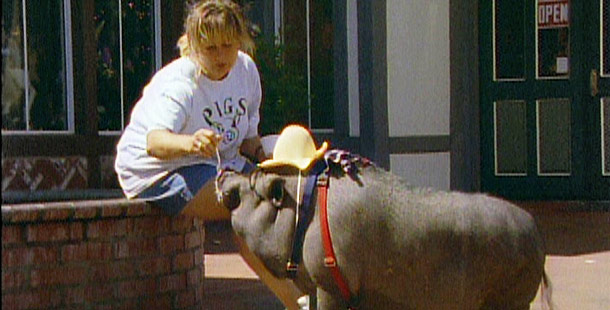 More and more Americans are keeping pet pigs. As potbellied pigs Maynard and Cecil demonstrate on The Joy of Pigs, some pigs are more welcome in the house than in the barn. These two have the run of their owner’s Beverly Hills home, and are just like any other household pet — if a little rounder.

Originally intended for display in zoos, potbellied pigs were first imported into the United States from Vietnam in 1985. They became a craze, and prices skyrocketed. Today, the fad has faded, but despite the fact that they can grow to weigh 300 pounds or more if overfed, potbellied pigs still maintain their popularity as pets. In order to compete with other pet markets, pig sellers may lie, telling potential buyers that a diminutive potbellied piglet will top out at a full-grown weight of only 25 pounds. Within a few months, the new owners discover that their pet porker has ballooned way past that limit and, unless checked, is heading for a weight 12 times the one they were told! This gives a whole new meaning to “bringing home the bacon.”

But if an owner keeps a close watch on a pig’s eating habits, a potbellied pig should end up weighing no more than a relatively sane 100 to 150 pounds. Pig breeders are now trying to create smaller versions of potbellied pigs, about the size of small dogs, called “miniature pigs” or “micro-pigs.” More suitable for apartment living, these pigs should be less of a burden to owners, who often are not prepared for a pig’s girth, eating habits, and sometimes unmanageable behavior.

Some owners do become disenchanted with their pets and abandon them at shelters. That’s where Suzie Parkinson and her ranch, L’il Orphan Hammies, come into the picture. As you see in The Joy of Pigs, Parkinson lives on her Solvang, California, ranch with more than 50 porcine companions she has rescued from shelters. Many of them are pigs who grew from babyhood to become gigantic, ravenous hogs — natural for a pig, but more than some owners bargained for in a pet. The National Committee on Potbellied Pigs provides information to potential owners. Anyone interested in adopting a potbellied pig should understand the challenges, as well as the joys, of keeping this unusual, endearing animal as a pet. Like dogs, pet pigs must go out for walks; like cats, they can learn to use a litter box. They enjoy a good scratch or a fun game of fetch, and can easily be trained. In addition, they generally get along well with other domestic animals.

Pigs are instinctively wary of being picked up: in the wild, predators capture them from above and lift them through the air. However, many do enjoy lap visits and cuddling. Pigs are clean pets who will stay tidy if they are bathed and groomed. To keep them cool in hot weather, owners should provide lots of clean water for them to splash and wallow in — unless you’d rather keep a mud puddle around.

The Beauty of Ugly
Sharkland
Deep Jungle: The Beast Within
Touching the Wild
The Whale Detective
The Good, the Bad, and the Grizzly