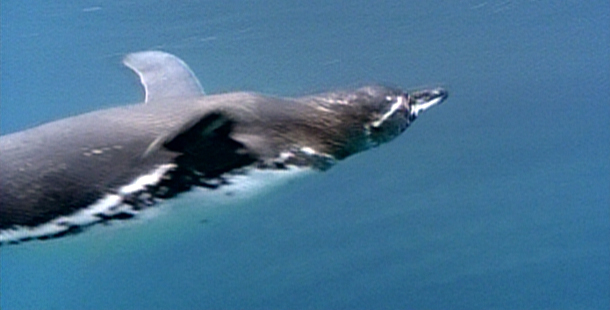 It may not seem natural for a bird to fly under the sea. But since they abandoned the skies more than 50 million years ago, penguins have evolved some ingenious solutions to the challenges of a mostly marine life. Most importantly, perhaps, penguins have evolved an extraordinarily streamlined body that allows them to feed efficiently on the fish and other prey that live deep in the sea, far out of reach of their flying cousins. “Penguins have an almost perfectly hydrodynamic body profile — just what you want if you live in a water world,” says Gerald Kooyman, a University of California, San Diego biologist who has studied penguins for decades. In fact, Kooyman says, the penguin has among the most streamlined body shape ever gauged. A swimming Chinstrap penguin measuring more than seven inches wide, for instance, slices through the water with less resistance than a quarter-sized pebble. 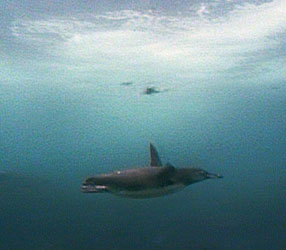 Such streamlined design allows penguins to swim fast. While most cruise at about 5 miles per hour, some, such as Gentoo penguins, have been recorded blazing along at 15 miles per hour. Such bursts, often achieved by “porpoising,” or repeatedly leaping out of the water, probably help penguins snag quick-moving prey and escape predators like leopard seals and killer whales. Sleek bodies also help penguins travel long distances. While most species appear to cover fewer than 60 miles in a single trip, some roam vast feeding territories. King and Emperor penguins, for instance, have been known to cover almost 1,000 miles on foraging trips that last up to a month, swimming more than 40 miles per day. Adelie penguins are believed to swim up to 3,000 miles to return to their spring nesting grounds, having spent the rest of the year roaming the drifting pack ice around Antarctica.

Penguins aren’t just champion swimmers, however: Kooyman’s research has helped reveal that they are also world-class divers. In the 1970s, in an effort to understand what Emperor penguins were doing at sea, Kooyman pioneered the use of automatic dive recorders — devices attached to the penguins that recorded the depth and length of their dives. Though relatively crude, the first devices produced astonishing results: the penguins were revealed to be diving to depths of almost 900 feet in search of food. Later, more sophisticated devices recorded Emperors staying underwater for up to 11 minutes and diving to at least 1,766 feet. The devices showed that other penguins also ventured into deep waters far more often than biologists had thought possible. Researchers observed one Gentoo penguin, for instance, making more than 450 dives in 15 hours, some to lower than 300 feet. 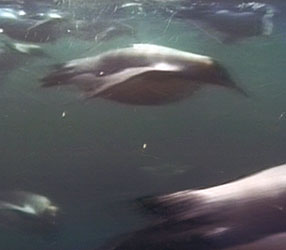 At such depths, penguins must overcome at least one potentially deadly challenge: the enormous pressure that is squeezing their bodies. At 1,200 feet, for instance, the birds are being squashed by 40 times the pressure they feel at the surface. The big squeeze is dangerous because it crushes the air in the penguin’s lungs to just one-fortieth of its original volume, making it hard for oxygen to circulate to the brain and other vital organs. The pressure also forces nitrogen to dissolve in the blood; in humans and many other animals, the dissolved nitrogen can cause dangerous conditions called nitrogen narcosis (which can cause divers to hallucinate and make deadly mistakes in the deep) and “the bends,” a painful condition caused by the formation of nitrogen bubbles in the blood.

How do penguins avoid these problems and stay down so long? Recent research suggests that, as they free fall into the depths, the birds cut off blood flow to many parts of the body — essentially turning off all but the most essential organs, such as the heart and the brain. This not only allows the birds to hold their breaths longer, but also reduces the risk that their blood will become contaminated by nitrogen, researchers say. Whether the penguins can consciously control or limit this body shutdown, or whether it occurs automatically when they reach certain depths, is not yet known.

Penguins also have other adaptations that make them highly efficient menaces of the deep sea. Their tongues are armed with sharp, backward-facing barbs that help prevent prey from escaping. And penguin eyes appear to be adapted to multipurpose use, producing sharp vision in both the dark depths and at the sunlit surface. This is no easy accomplishment, since air and water demand very different kinds of sight. But penguins apparently make the switch smoothly by changing the shape of the lenses in their eyes to correct for differences in the way air and water transmit light. The birds seem to use fine eye muscles to bend and warp the wafer-thin lens, which is shaped much like a contact lens. Some penguins even may retain some of their ability to see color in the deep, where only blue-green light penetrates. Humboldt penguins, for instance, have eyes that are especially sensitive to blue-green light — a trait that may help them see and distinguish prey like squid.

SHARE
Features
About
Additional Web & Print Resources
Protecting Penguins
Flightless Wonders
You May Also Like
An Original DUCKumentary
Penguins: Spy in the Huddle | Episode 1 | The Journey