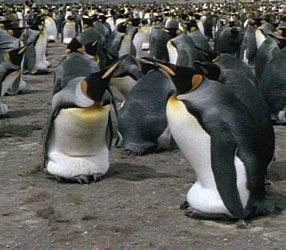 In the spring of 1498, seamen sailing with Portuguese explorer Vasco da Gama on his historic voyage from Europe to India were astonished to discover a flock of large swimming birds leaping like porpoises from the deep waters off Southern Africa. The remarkable creatures, one sailor wrote, “had a cry resembling the braying of donkeys.” For days, da Gama’s men debated how the apparently flightless creatures survived in the frigid waters so far from land. Today, we know that da Gama’s expedition had stumbled across a flock of aptly named Jackass Penguins, also known as African Penguins. But, even now, modern researchers are still amazed by the routine feats of endurance achieved by Earth’s 18 species of penguins.

Those accomplishments are the focus of this week’s NATURE program, THE WORLD OF PENGUINS, which takes viewers on a global tour of penguin territory. From the freezing dark winters of the Antarctic ice sheet to the blistering equatorial summers of the Galapagos Islands, THE WORLD OF PENGUINS documents the ingenious adaptations that penguins have developed, allowing them to forsake the skies and prosper in some of the planet’s harshest environments. It also captures some of the complex penguin rituals, from flipper boxing and bill jousting to bowing contests and feeding chases, that have long fascinated observers.

“When most people think of penguins, they think of the very cold, icy, south polar regions,” says Tony Williams, a penguin researcher at Simon Fraser University in Canada. But in reality, he says, only two species, the Adelie and the Emperor, are confined to chilly Antarctica, where penguins deftly withstand temperatures as low as 100 degrees below zero. The majority of penguins can be found throughout the cool southern oceans, breeding on islands and the coastlines of Africa, South America, and Australia. The northernmost species, the Galapagos Penguin, lives on those tropical islands just a few miles north of the equator.

Although they are spread across the southern half of the globe, far-flung penguins have much in common. All species share torpedo-shaped bodies that sport the same basic color scheme of dark backs and white bellies. This outfit makes for perfect camouflage in the sea both from above and below. Instead of broad, long wings and tails suitable for flight, penguins have stiff paddle-like flippers, stubby tails, and broad feet that allow them to “fly” underwater. Similarly, penguins have lost the light, hollow bones that help flying birds stay aloft; instead, they have heavy, solid bones that are an advantage for a bird that often must dive deep to find the fish, squid, and shrimp they usually eat. Sadly, many penguins are also beginning to have something else in common: their survival is endangered by a wide range of threats, from habitat destruction to changes in the global climate.

While similar, each species also displays its own variation on the basic penguin theme. The pattern and color of head feathers, for instance, varies greatly from bird to bird. Antarctica’s Emperor and King penguins complement their feathery tuxedos with dramatic bright orange patches on their heads and bills. Six other species — the Rockhopper, Erect-crested, Fiordland, Snares, Macaroni, and Royal penguins — sport elaborate yellow crests and plumes that give them a festive look. One species, Australia and New Zealand’s Little Penguin, has even traded the traditional penguin black-tie look for a lustrous blue-gray coat — hence its nickname, “Little Blue.”

The Little Blue’s name is fitting in another respect: it is the world’s smallest penguin, measuring just 18 inches tall and weighing a little over two pounds. In contrast, Emperor Penguins — the world’s largest species — can reach almost four feet and 90 pounds, the size of a young child.

No matter their size, people often think of penguins as the awkward, waddling buffoons of the bird world. That is largely because most photographs and films of penguins are taken on land, where the birds are easy to find as they congregate to breed and wait for feathers to drop out and regrow. However, most penguins actually spend only a small part of their lives on land. The majority of the time — for some species, up to 80 percent of it — penguins are at home in the ocean, feeding or simply resting at the surface. And once at sea, penguins are far from clumsy. Indeed, they are the avian equivalent of attack submarines: sleek, deadly predators designed for speed, deep diving, and the survival of harsh conditions.