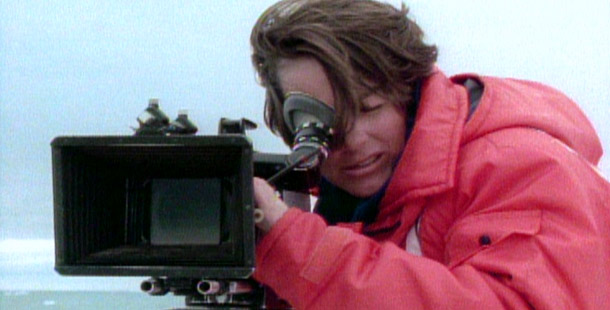 Filming the Arctic walrus presented many challenges. I was searching for new subject matter, wildlife that little was known about, and I wanted to be challenged physically. I also wanted an adventure. So the Arctic was the perfect place. On my earlier trips to the north, I had been attracted to the narwhal (the unicorn whale, with a nine-foot “horn” that’s actually a tooth), but I soon began to hear more and more about the walrus. I decided to film walruses in their natural habitat, something no one had ever done. But even though I expected a challenge, I didn’t realize just how difficult a place to work the Arctic is. I quickly found out: surface conditions were well below zero, and water temperatures hovered at 29 degrees Fahrenheit. On top of that, the walruses I came to film spent most of their time underneath an eight-foot-thick canopy of ice! Because of the extreme cold, I could only stay underwater for about 40 minutes on each dive. I had to make that footage count.

The windows of opportunity were few and far between. The hardest part was figuring out how to get close enough to take the walruses’ picture. It meant that I had to get to know the animal and the intricacies of its behavior. I began to investigate how I could film walruses in the water.

The Inuit immediately told me: “Don’t!” They warned that if a walrus were to come up to me while I was in the water, I must get out as quickly as possible. The Inuit spoke of the aggressive behavior walrus exhibit when hunted. The translation goes something like this: The angry walruses take to the water as a group and charge, penetrating the bottom of the wooden canoes with slashing tusks and leaving the Inuit to bail furiously. And although walruses mostly eat clams as their regular food source, scientists know that walruses will eat the occasional seal. This has been proven by eye-witness accounts and evidence of seals found in the stomach contents of walruses. The Inuit thought that, like a seal, a diver could also get grabbed — and maybe even eaten — by a hungry walrus.

It’s a funny thing. As an underwater cinematographer, when somebody warns you not to do something, it almost feeds your curiosity to figure out why not. Then you start figuring out how to do it.

But I was finally convinced of the danger when I spoke to the Arctic Bay’s then Renewable Resource Officer, Glen Williams, about swimming with walruses. He said, “Sure, you can go dive in the water with walruses, but first let me tie a rope around you. It’s a lot less paperwork for me if I can get your body back.”

I took heed of everyone’s advice and designed a cage, the same kind people use to film sharks underwater. Still, the first encounter I had was terrifying. The cage was manufactured with a camera port that also served as an escape route, large enough to swim out of if the situation got too dangerous. We dropped the cage, buoyed by four floats, into the water from our boat and anchored it up against a large piece of ice. I got into the cage and the boat pulled away.

Filming underwater was often a frightening experience. I waited for the walruses to emerge. I will never forget the sight of several walruses swimming right up to me out of the gloom for the first time. They were huge — as big as trucks. I felt totally alone and vulnerable. And that’s when I realized that my camera port was big enough for the walruses to get at me if they wanted to!

Before diving I had arranged an emergency signal with the surface crew. If something went wrong underwater, I was supposed to pull vigorously on one of the four floats, and the boat would come over and pick me up. After five minutes underwater, I was so intimidated by the enormous animals that, between camera takes, I kept tugging on the floats. It seemed like hours before the boat came over and fished me out. On board, I glanced at my wife, whose job was to shoot surface camera. She was dutifully set up to film my possible demise. A bit dismayed at my frantic yanking on the float, she asked, “What happened? Did they hit you?” I answered sheepishly, “No, they just looked at me.”

We repeated this process several times until I was satisfied with the footage. After I calmed down, I was amazed to see how much control the walruses had over themselves underwater. They could use their flippers to hover and turn on a dime. It was incredible to observe such a big animal in command of its environment — so different from their clumsiness on land.

After a number of encounters from the cage, the cage’s limitations became really obvious, because it would only give me limited access to the walrus. If I wanted to document the underwater wild societies of Eastern Atlantic Walrus properly, then I was going to have to get out of the cage and follow the walrus into its world. By diving without the safety of a cage between us, which you can see on TOOTHWALKERS, I was able to get closer to wild walrus than anyone has ever done before.

Adam Ravetch was born and educated in California. He has filmed the creatures of the world’s oceans for more than ninety shows, working for NHK Japan, CBS, NBC, The Cousteau Society, The Last Frontier series, and The Global Family series. TOOTHWALKERS contains the first underwater footage ever shot of wild walrus societies. Learn more about his work on his Web site.

About
Web & Print Resources
Walruses in Captivity
Survival in the Arctic