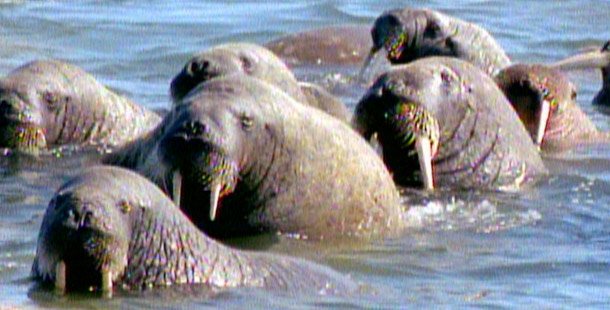 On an individual basis, rescuing orphaned walrus calves from the wild is a good way for biologists to learn more about this species. Five such orphans live at New York’s Aquarium for Wildlife Conservation. The oldest, named Nuka, which means “little sister” in the Inuit language, is 15 years old. She was found near the town of Barrow on the northern tip of Alaska. Ten years later, from the same region, the Aquarium adopted another young walrus, Tiipaq, or “little girl who came from the country to the city.” Three more youngsters, Ayveq, Uupa, and Kulusiq, were all orphaned as infants when their mothers were killed during an annual hunt in 1994. “If the mother dies, the orphan can’t be fed, and the baby dies,” explained Dr. Hans Walters, Animal Department Supervisor at the Aquarium.

Uncontrolled oil exploration may endanger walrus habitats. According to Walters, these calves were 120-pound wrinkly puppies when they arrived. They needed 24-hour care, and had to be bottle-fed for two years. Now these walruses weigh nearly 1,000 pounds each and eat between 40 and 60 pounds of food a day. Besides providing the right diet for these large carnivores, Walters said the biggest challenge is keeping the animals mentally stimulated. “In the wild, they would spend almost their entire waking time looking for food,” he explained. The keepers train the walruses to fetch and wave, which are fun activities, but which also serve a purpose. “The presenting of the foot and open mouth is basically a veterinary exam,” said Walters. “It’s a simple way of looking at the animal to make sure its mouth is okay and the flipper is okay.” However, Walters admitted that the walrus wave is a real crowd-pleaser as well.

Besides the occasional polar bear or killer whale preying on young or injured walruses, humans are their most common predators. While the Eskimos, Indians, and Aleuts hunt these marine mammals, they are allowed to do so on a subsistence level, although the allowed catch varies internationally. Commercial hunting of walruses was outlawed by Canada in 1930. Later, as wild populations declined dramatically, the United States, Greenland, and Russia joined in. The Convention on International Trade in Endangered Species (CITES) listed the Pacific walrus in its Appendix III in 1975. However, hunting is not the main threat to wild walrus populations: uncontrolled oil exploration in the Arctic region may have farther-reaching effects on their habitat.

About
Web & Print Resources
Survival in the Arctic
Behind the Scenes

The Elephants of Africa
Holy Cow
Super Cats: Episode 1 | Extreme Lives
A Life Among the Clouds: A NATURE Short Film
The Good, the Bad, and the Grizzly
Equus "Story of the Horse" | Episode 2: Chasing the Wind