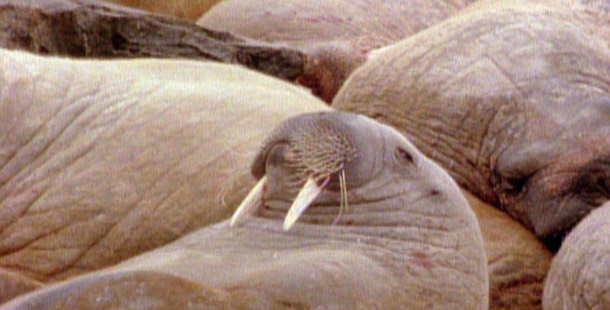 The NATURE program TOOTHWALKERS: GIANTS OF THE ARCTIC ICE follows the trail of wildlife filmmaker Adam Ravetch on his quest for some of the first underwater walrus footage ever shot. But in what kind of environment do the Arctic’s creatures live?

A walrus mother and pup. The vast arctic region is perhaps the last place that would make most people feel “on top of the world,” yet that’s exactly where it is. Some 2.9 million square miles of polar desert, tundra, and ice surround the North Pole within what we call the Arctic Circle. Of course, that acreage changes with the seasons as ice floes melt in the warmer summer months, and then freeze again during the winter. Anyone who lives here must be prepared for extreme cold-weather conditions: temperatures plummet to -40 degrees Fahrenheit and winds rage at 25 miles per hour. To survive the polar winter, walruses have a three-inch blubber layer just beneath the skin. This fatty lining also acts as an energy bank for a lean feeding season.

While they look lethargic and clumsy on land, walruses are spry and fast in the water, averaging four to six miles per hour — much faster than humans can swim. Like sea lions, seals, and other pinnipeds (Latin for “fin-footed”), these “sea cows” have long, cone-shaped bodies streamlined for swimming. Their scientific family name, Odobenidae, is Latin for “those that walk with teeth,” and refers to the way these beasts use their tusks to haul out onto ice floes. Both males and females have these giant teeth, but only the males use them to fight for dominance within the herd. Walrus herds can number in the hundreds, and it is important for males to firmly establish their place in the pecking order by jousting, or lunging at each other with their tusks. Otherwise, the tusks serve as ice picks for movement and defense from marine predators.

Although it was once thought that walruses used their tusks to dig for clams — their staple food — footage like Adam Ravetch’s shed light on a different foraging method. Scanning the ocean floor with their moustache pads of vibrissae, or whiskers, to locate clams and other mollusks, walruses blast jets of water from their mouths into the sand to uncover the clams, then suck the meat from the shells. An adult walrus can eat up to 6,000 clams a day, or four to six percent of its own body weight.

Walruses consume a high volume of food in preparation for their search for land when the ice starts to melt during the summer. For females, energy is especially important for calving.

An average pregnancy lasts 15 months, and walrus cows deliver one calf every two years or longer, just before the seasonal migration north to follow the receding ice. Youngsters will nurse for that two-year period. As you can see in TOOTHWALKERS walruses travel thousands of miles to their summer destinations, and calves must stay with their mothers. Occasionally, calves become orphaned at this time. Those that survive can live up to 30 years, reaching weights of up to 3,000 pounds for males and 2,000 pounds for females.

The walruses featured in TOOTHWALKERS live in Canada’s Foxe Basin, to the south of Baffin Island. Nearby, the remote Inuit hamlet of Igloolik, where Adam Ravetch established his research station, is steeped in tradition, with archeological sites that date back 4,000 years. Hunting walruses is a way of life for the people here, and various governments allow them to kill a limited number each year. Their methods are not that different from those recorded in the film NANOOK OF THE NORTH.

In 1922, explorer/filmmaker Robert Flaherty released NANOOK OF THE NORTH, which some cinematic historians consider a precursor to the modern documentary. This silent film stars an Inuit man named Alakarialak, who portrayed Nanook the Bear as he fought to survive the savage Arctic elements. With a recreated igloo and staged hunting scenes, the film provided audiences a first glimpse of one of the harshest environments inhabited by humans.

About
Web & Print Resources
Walruses in Captivity
Behind the Scenes

Equus "Story of the Horse" | Episode 2: Chasing the Wind
Deep Jungle: The Beast Within
The Elephants of Africa
My Congo
The Good, the Bad, and the Grizzly
Natural Born Rebels | Episode 1| Hunger Wars