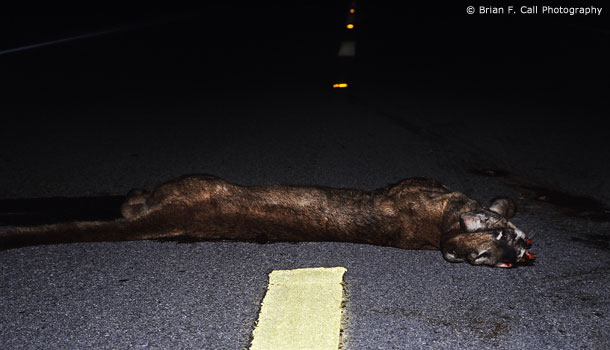 It was perhaps the saddest photograph Brian Call had ever taken. But it may help the Florida panther reach a happy ending in its struggle for survival.

Brian Call took this photo of a cougar that was struck by a car. In the spring of 2001, Call — a Florida wildlife illustrator and photographer — was driving home from a night of photography in a state park when he encountered a horrific sight: a young Florida panther, crumpled and silent in the middle of a rural highway. Stunned, Call climbed from his car to see if he could help, but it was too late. The panther had died minutes before; the body was still warm to the touch.

Soon, Call realized that the panther’s mother was hidden in some nearby trees, calling desperately to its lost daughter. Later, he would learn that the dead panther’s sibling, a male, was also killed that night by a car, not far away on the same highway.

Call knew he was witnessing a tragedy. As NATURE’s Trail of the Cougar notes, the elegant, powerful panther is Florida’s celebrated state mammal. But they are also one of the state’s rarest inhabitants, with less than 100 of the big cats remaining. Unfortunately, each year a few panthers lose their lives on the state’s highways, which increasingly hem in the cat’s shrinking habitat.

“I was quite upset, but I managed to pull myself together enough to document the scene,” Call recalled later. “The photos were the hardest images for me to take, but I made a promise to this panther that I would use them to help people become more aware of the hazards this endangered species faces.”

Indeed, Call’s photo has helped dramatize the threat that highways pose to Florida panthers. So did a memorial service he later organized at the spot. And while some major roads have fences and underpasses to help protect the cats, others remain dangerous byways. He hopes his efforts will help remind drivers to slow down to prevent tragic collisions — and convince government officials to step up efforts to protect the species.

Call discussed his interest in nature photography and his efforts on behalf of Florida’s panthers with NATURE:

NATURE: How did you get interested in nature photography?

Well, I’m originally from Massachusetts and I was always interested in nature. In the late 1980s, I went on a vacation to the Virgin Islands and learned how to use a professional camera. When my wife and I moved to Florida in 1991, I bought a nice camera. I had fallen in love with the Everglades; we didn’t have much money, but that was our escape. And I’ve been photographing there ever since, for the last 11 years.

Had you ever photographed a Florida panther before that night on the road?

No. But photographing a panther in the wild is the dream of every nature photographer in Florida. That night, I was on my way home from the Fakahatchee Strand State Preserve. When I found the panther in the middle of the road, my first reaction was to sit there and pat it. Then, I heard a chirping sound and realized it was the mother calling out to her cub. That made the whole scene that much more tragic.

It also really moved me to want to do something more than take photographs. I had always believed that using photography to bring nature back to the public and my friends would be enough. But at that point I decided it wasn’t. So my wife and I came up with the idea of holding a roadside awareness ceremony [in June 2001]. I was really motivated to bring this problem to the attention of people.

It was great. We put signs up along the road. I gave a speech and had some panther biologists give talks. There was a nice crowd and lots of media. Some passing cars even slowed down. But we stayed way over on the side so no one became a road kill themselves.

Signs on Florida roads alert drivers to cougars in the area. Is there any kind of sign marking the spot?

We couldn’t leave anything permanent. We tried, but the [highway department] couldn’t understand why we wanted a roadside marker for something that wasn’t human. They said it had never been done before. I didn’t understand. I mean, this is the state mammal of Florida, and it symbolizes the state’s wilderness. I thought it was worthy, but they declined.

Are drivers aware of panthers?

There are signs all over the place that say “panther crossing,” and there are some flashing lights and rumble strips. But I’m still amazed at how many people fly down those roads.

Has it changed your driving habits?

I always drove the speed limit anyway, especially out in wilderness areas. Sometimes it takes me forever to get home.

Are cars the major threat to panthers?

Road kills are a major source of mortality. But they are not the only thing killing them. Panthers also fight over territory and sometimes to the death, because there is not enough habitat for them. So my biggest thing right now is preserving their habitat. That is the number one way to protect the Florida panther and its future.

You are active with Friends of the Florida Panther Refuge. Can you tell us more about that?

We assist the U.S. Fish and Wildlife biologists out on the refuge [headquartered in Naples, Florida]. We promote their mission and undertake activities, such as tree plantings and open houses. Anything to help raise awareness about panthers.

Have you seen other panthers in the wild?

I am actually lucky enough to have seen a live panther in the wild. I was with a small group and one crossed a dirt road we were on. He was about 100 feet away. We saw him for about 4 or 5 seconds. We also found tracks that day and a kill site; the panther had killed some type of bird. It was a high point for my wife and me. So I’ve seen a live panther but haven’t gotten any photographs of one. But I’ll keep trying.