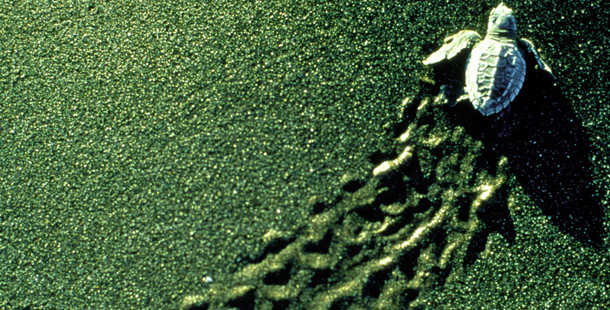 It is perhaps the greatest adventure story ever: how tiny pioneers came to settle on a seething molten ball of dust and gas, and slowly created a cosmic oasis teeming with a seemingly endless variety of life, from microscopic bacteria to whales the size of locomotives.

This week, NATURE’s TRIUMPH OF LIFE offers the first chapter in this amazing tale: the story of life on Earth. THE FOUR BILLION YEAR WAR explains how both conflict and cooperation have helped shape the species that today populate our world. And it profiles the winners and losers in this epic evolutionary contest — from the massive dinosaurs who disappeared long ago to the humble bacteria that have survived for billions of years virtually unchanged.

Nobody knows exactly where the seeds of life came from. Some believe the chemicals essential to life were brought here by meteorites, while others believe they arose naturally in the early oceans and atmosphere. But most researchers agree that carbon, hydrogen, oxygen, and nitrogen eventually linked up to form the basic molecules of life. Then, they slowly assembled into more and more complicated structures that could reproduce themselves. That set the stage for the blossoming of life.

At the heart of this amazing story is the quirky and chaotic process of evolution — the ability of organisms to change their behavior and body shape over time to adapt to changing circumstances. For instance, a flock of birds (let’s call them the “small beaks”) might face a changing climate that kills off its favorite food plant, which produces small, soft seeds that perfectly fit their small beaks. Luckily, due to random changes in their genetic codes, the flock produces a few newborn birds that have bigger beaks.

Normally, the change might not make any difference. But in this changing environment, the bigger bills allow these few birds to feed on the bigger, harder seeds from another plant. As a result, this new variety of “big beaks” become healthier and are able to produce more big-beaked offspring than their smaller-beaked brethren. Eventually, over a long period of isolation, the small beaks die out and only the big beaks remain. A new species has evolved.

The great British biologist Charles Darwin first recognized the importance of the evolutionary process in the 1800s, in part by studying the differently shaped beaks of birds in the Galapagos Islands off Ecuador. Each island is home to a slightly different version of the finch, which have evolved specialized beaks to take advantage of particular food sources. The specialization means they don’t have to compete with other finches for food, improving the odds of survival.

Today, evolution continues — though generally too slowly to be obvious. It can take thousands or millions of years for a new species to evolve. Still, fossils tell us that change on Earth has been a constant and never-ending process. Despite the changes, however, life — in one form or another — has triumphed.