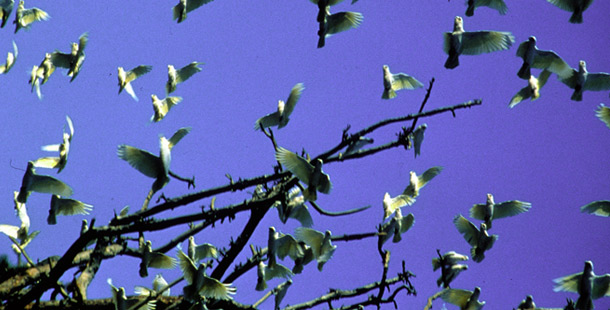 Choreographed Cooperation Life may be a contest in which only the fittest individuals survive, but cooperation has also played a key role in evolution. WINNING TEAMS takes a close look at the alliances that animals have forged — with others of their own kind and very different organisms — in a bid to stay alive. In fact, teamwork occurs everywhere, from flocks of birds and herds of wildebeest to colonies of ants and termites.

For some animals, the motivation for joining together is defense. A flapping, pirouetting flock of birds, for instance, can make it harder for a hungry falcon to home in on a single victim. Similarly, a thundering, shifting herd of wildebeest can be an intimidating — and confusing — sight to a hungry lion. And in both cases, there are more eyes to keep on the lookout for attackers. There is, indeed, safety in numbers.

Not surprisingly, some predators have responded to herding defenses with teamwork of their own. Feeding dolphins, for instance, have been known to work together to herd schools of fish toward the surface, where the seafood meal finds it harder to hide. Lions also team up to spring the trap on wildebeest, with several lionesses needed to topple one of the big beasts. And early human hunters, of course, learned to work together to hunt creatures, such as woolly mammoths, that were many times their size.

Other times, however, the benefits of teamwork are less obvious. Animals that feed together, for instance, can spread out and cover more territory, making it more likely that one will hit a mother lode of food. The strange Damaraland mole rats featured on WINNING TEAMS, for example, drill through the soil as a team of up to 40 family members, looking for the roots and tubers that fill their empty stomachs. For years, researchers were unaware of this choreographed cooperation, since the underground-living rats are quite secretive.

Similarly, the link between some plants and the birds that eat their seeds took years for researchers to recognize. These plants, which include some wild rose bushes, produce tough berries that, if dropped on the ground, won’t sprout. But if the same seed is eaten by a bird, and is then etched and cleaned by the bird’s stomach acids and excreted onto the ground, it is ready to germinate. Similarly, some flowers can be pollinated only by a particular insect. The arrangements have led some scientists to ponder who is getting the better deal: Are the birds and insects slaves to the plant, or is it the other way around? The answer lies in their “symbiotic” relationship — meaning both organisms benefit mutually from the other.

Often overlooked is the important role that microscopic organisms play in the lives of many plants and animals. Some of these “symbiotic” bacteria live on the roots of plants, helping them draw nutrients from the soil. Others reside in the stomachs and intestines of everything from termites to humans, helping to digest food and remove toxins.

Without us, our stomach bacteria would die. But without the bacteria, we might fall prey to illness. It’s a classic case of the evolutionary ties that bind all life together in the drive to build highly competitive — and ultimately winning — teams.