In 2000, The Urban Elephant brought viewers the touching story of Shirley and Jenny, two crippled elephants reunited at The Elephant Sanctuary in Tennessee after a 22-year separation. The bonding was immediate, intense and unforgettable between the two former circus elephants. But long after the cameras were turned off, the wondrous moments would continue.

The two were inseparable. Shirley quickly assumed the role of surrogate mother to Jenny, who, though now an adult, had been a baby when they first met at the circus. Their bond was so intense, it would forever change life at the sanctuary. As Carol Buckley, Executive Director of the Sanctuary describes it, ‘that was the love that started our elephant family.’ “After Shirley’s arrival, elephants who had previously been companions and friends were now sisters and aunts in the mother and daughter relationship of Shirley and Jenny. They gave the sanctuary its future,” says Carol. These strong bonds would soon be needed. Sadly, on October 17, 2006, ten years after arriving at the sanctuary, Jenny died.

Jenny came to the sanctuary quite ill. She had scars and other traces of misuse and abuse from her past as a circus elephant. She had been exposed to tuberculosis. And due to an attack by a bull elephant before coming to the sanctuary, Jenny had a crippled back leg. Her caregivers suspect the leg harbored a hidden bacterial infection that flared up last year. 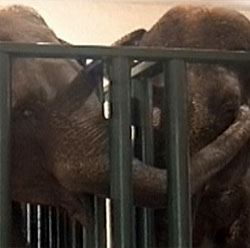 Carol says the bond between Shirley and Jenny was never more touching than in the last days of Jenny’s life. “The day before she died, Jenny had been down and she wouldn’t get up. Shirley stood by her and insisted that Jenny get up. Jenny just couldn’t get up. Then Jenny stood up but she had to lean on Shirley to keep up. If you looked at Shirley’s face, you could see that she knew that Jenny was dying. Jenny dropped to the ground and Shirley walked into the woods.”

Jenny was on her deathbed when Shirley walked to the woods but she would give Carol and the sanctuary caregivers the privilege of one last incredible glimpse into the world of elephants before she died. “After Shirley left, Jenny started to make this rumbling noise. With each exhalation, she would rumble. It was almost like a singing. As Jenny did this, Bunny and Tara (two sanctuary elephants) came running over. We thought that was it and she was going to die. And then Bunny and Tara started trumpeting and rumbling. At a certain point, I turned to Scott (Director of The Elephant Sanctuary) and I asked him how long this was going on. He said 58 minutes! Well, she continued for another two hours. Jenny lived through the night and was even perky and silly. She passed in the morning. And when she died, she did a vocalization that I had never heard. It was like a trumpet. It was very low and got quieter and quieter. She passed very peacefully without straining or exerting herself. To experience this ritual was amazing. I had never seen anything like it.”

Shirley stayed in the woods until Jenny passed. She didn’t eat for two days. “It was very hard and especially hard on Shirley. Shirley’s whole life was about taking care of baby Jenny. It was like a mom losing her baby.”

Fortunately, Shirley has had some extended family members to lean on during the sad times. Shirley is very close with an elephant named Bunny — the two are like sisters. Bunny arrived to the sanctuary just two months after Shirley and they bonded instantly.

Carol says Jenny’s death was difficult for the elephants but they are recovering. The healing process may have been sped up by a new elephant, Misty, who has come in from a different area of the sanctuary. “She’s a very happy creature. She loves all elephants. She just runs around. And they love her. She’s a ball of happy energy.”

For more information on Shirley and Jenny, please visit the Elephant Sanctuary Web site at http://www.elephants.com/bios.htm.