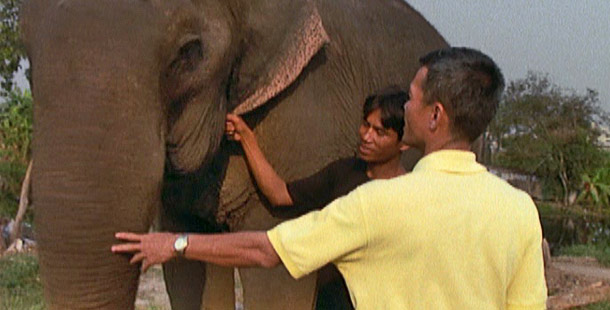 An elephant jam. It’s not an uncommon sight on the streets of Bangkok, Thailand, where Asian elephants are known to walk the streets, sometimes snarling traffic with their lumbering bulk. Drivers may curse and horns honk, but the elephant will not be hurried.

This week, NATURE takes a close look at The Urban Elephant, traveling from Bangkok’s crowded streets to the quiet forested hills of Tennessee to examine the close and often complicated relationships people have forged with these giant creatures. It tells the bittersweet stories of a few of the thousands of Asian elephants that live out their lives in captivity; in circuses, zoos, farms, and isolated forest logging camps. 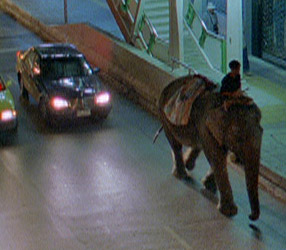 Elephants on city streets are a familiar sight in Bangkok.

Researchers believe that less than 40,000 endangered Asian elephants still survive in the wild, down from 1.5 million to 2 million in 1970. But there are thousands more Asian elephants living in captivity, since the animal has long been viewed as a prized captive. It is, for instance,a valued beast of burden in India and across Southeast Asia. For thousands of years, elephants have pulled plows, carried cargo, hauled lumber from forests, and ferried passengers across shallow rivers. Guided by expert elephant riders called “mahouts,” many Asians consider elephants to be the smart, rugged alternative to modern machines.

But not all Asian elephants still live in their homelands. As early as 1796, resourceful traders began shipping the animals to Europe and North America, where they became celebrated curiosities. By the 19th century, Asian elephants were a staple of zoos and traveling circuses. Again, the animals’ intelligence and staying power proved prized; circus trainers, for instance, could train a young elephant to perform amazingly agile moves, knowing it might be able to occupy the spotlight for much of its 60-year life span. Some of the circus elephants featured on NATURE’s The Urban Elephant, for instance, have been performing since the late 1940s.

But some former circus trainers believe performing elephants deserve a different life. As The Urban Elephant shows, they have set up sanctuaries — such as The Elephant Sanctuary in Tennessee — where the one-time big-top stars can retire and live quietly alongside others of their kind.

Similarly, in Sri Lanka, conservationists are working to create better lives for that nation’s elephants. In addition to working to protect wild habitat, they have created the Pinnawala Orphanage, featured on The Urban Elephant. It was founded in 1975 to take care of the many baby elephants found orphaned in the forest after their mothers died, or who were captured or killed. It also takes in captive elephants that have been mistreated by their owners, or wild elephants that have run afoul of expanding human communities, outcast because they have trampled crops or attacked farmers.

In Canada and the United States, however, zoo officials face a different problem: a shortage of baby elephants. Because Asian elephants do not easily breed in zoos, captive populations have been dwindling.

If nothing changes, the population will be gone within 50 years, experts estimate. So, with most zoos unwilling to obtain or barred from capturing new animals from the wild, they are taking increasingly sophisticated steps to maintain their herds. At the National Zoo in Washington, D.C., for instance, researchers have successfully pioneered the use of artificial means to impregnate their female elephants. Soon, “test tube” elephants could become routine, and even help restock animals into the wild.

That day is still far off. Meanwhile, at Canada’s African Lion Safari, caretakers have had remarkable success getting their group of 11 Asian elephants, which includes 3 males, to breed without special assistance. Since 1985, the animal park has welcomed 7 baby Asian elephants. That record is especially impressive because each pregnancy lasts nearly two years, meaning that growing a herd is a slow and arduous task. But elephant program director Charlie Gray says the waiting is worth it, since the breeding program is improving our understanding of elephants. Working with researchers at the University of Guelph, for instance, African Lion Safari has helped develop tests that can pinpoint when a female elephant is ready to breed.

Understanding such intimate details may eventually help people live in harmony with the endangered Asian elephant. As NATURE’s The Urban Elephant shows, these remarkable animals long ago learned to adapt to the sometimes cruel demands of people. Now, perhaps, we can return the favor by helping these proud animals reclaim their wild heritage.

Equus "Story of the Horse" | Episode 1: Origins
Dogs in the Land of Lions
The Beauty of Ugly
Hippos: Africa's River Giants
Running With The Herd: A NATURE Short Film
Voyage of the Lonely Turtle