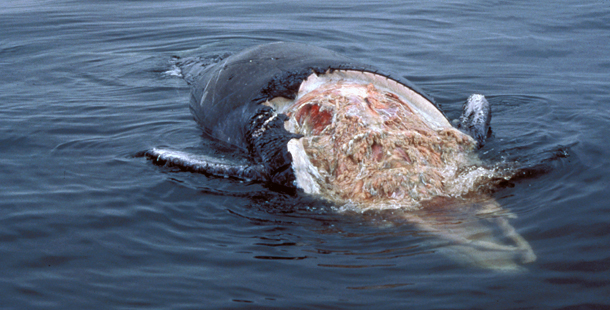 Careful, there’s a myth lurking in these waters. Can you separate fact from fiction in five shark-essential categories?

Shark attacks usually occur near feeding grounds — sandbars, river channels, or in shallow water. The great white usually stalks its target while cruising along the ocean bottom, then springs to the surface for a vertical attack. It prefers high-energy, fatty prey.

Attack methods vary: elephant seals are bled to death before being eaten; sea lions are dragged beneath the surface, then eaten at the bottom. Attacks on

humans are usually aimed at the legs. The attack can prompt a feeding frenzy since great whites prefer and seek out human flesh. Many biologists believe that white sharks attack surfers because their surfboards resemble seals.

There is still a great deal about the territo

rial and migratory habits of the great white that is not fully understood. The sharks tend to prefer temperate waters, but have been found as far north as Alaska and as far south as Australia. Their greatest numbers are concentrated off South Africa.
One area where great whites can alway

s be found is near a beach in the tropics. They tend to stay in the upper part of the water, but can descend to depths of more than 775 feet. Great whites can spend months at a time in the open ocean. In order to maintain constant body temperature, the great white’s metabolism keeps its body about ten degrees

warmer than the surrounding water.

There are no worldwide population estimates available for great whites, but the World Conservation Union has listed the white shark’s status

at the top of the ocean’s food chain. Their flat, serrated teeth and massive jaws let them prey on fat-rich marine mammals like sea lions, seals, whales, and dolphins as well as turtles, crabs, and other sharks. Weighing up to a ton, white sharks are essentially the ocean’s gigantic trash compactors, consuming not only animals but boat debris.

The carnivorous great whites favor the daytime for eating, and will often attack prey at the same time and at the same place. They can survive for

as long as 45 days on 60 pounds of whale fat. Fatty foods are required to keep the shark’s body temperature warm and give it energy for attacks at speeds of up to 15 miles per hour. A tactic called “bite and spit” is often used on prey — like humans — that are deemed an unsuitable, low-fat food.

Great whites are highly sensitive to their environment. Electric receptors are one of their greatest assets. Located along the sides of their bodies and in their heads, lateral lines send a nerve impulse to the great white’s brain when the surrounding water moves. The lines’ hair-lined cells can sense distance and direction, and can detect low-frequency sounds as vibrations.

While on the prowl, the great white also uses cells called ampullae of Lorenzini. Located in the shark’s snout, these cells can decipher electrical signals given off by hidden prey or any organism at close range.

Great whites have unusually large eyes for a daytime predator. Their retinas, roughly similar in structure to that of a human, have about 10 times the sensitivity to light. Yet great whites have notoriously bad vision — as demonstrated by their tendency to mistake surfboards for seals.

Little research has been done on the great white’s ability to learn. But in tests, they display a greater curiosity in unknown, brightly colored items than in bait. They are also thought to have a memory of place: Sharks off the coast of California and Australia gather for hunts at the same time each year.