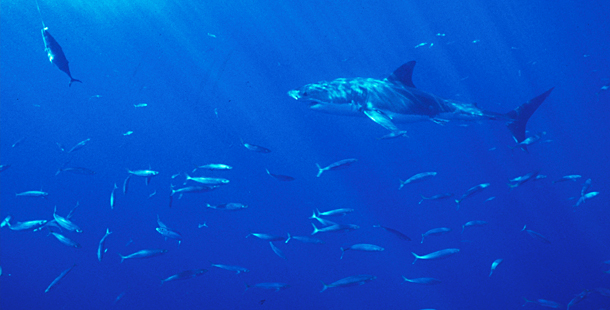 In the film JAWS 4: THE REVENGE, a deadly, man-hungry great white travels from New England to the Bahamas in pursuit of the family that exterminated its relatives in the first three JAWS movies. As rumors of white shark activity begin to circulate, a pair of marine biologists are doubtful that a white shark could swim in such a warm climate. Great whites are temperate water fish that remain in the coastal waters farther north, they say. The possibility that a shark may have traveled more than a thousand miles from the Notheast Atlantic coast to the Bahamas is considered preposterous. The film’s plot is ridiculous for a number of reasons. The idea of a shark with a vendetta is comical.

Yet since the movie’s premiere in 1987, it’s become apparent that one element of the otherwise ridiculous story is not so outrageous. Recent research conducted off the California coast shows that white sharks travel far more than was formerly believed. Previous tracking studies only followed the sharks for a few days, and it was assumed that great whites never ventured too far from shore — home of the coastal seal and sea lion colonies where these hunters find their favorite prey.

“Going into this, what we expected was that white sharks were just coastal animals that breed in Southern California, then migrate a few hundred miles north to feed on seals,” stated biologist Burney Le Boeuf of University of California-Santa Cruz. “But it turns out they’ve got a life at sea, and when they’re in the open ocean, they’re diving very deep at times.”

LaBoeuf is one of six scientists who contributed to the research, published on January 3, 2002, in the science journal NATURE. Great white sharks are tremendously difficult creatures to study. They don’t respond well to captivity, and are next to impossible to observe closely in the wild. For the NATURE study, researchers fixed pop-up satellite archival tags to the backs of six adult great white sharks — four males and two females found near seal and sea lion colonies off the California coast. Every two minutes the electronic tags recorded information on water depth, temperature, and light. The tags were programmed to detach on a specific date, at which point they floated to the surface and delivered their data to satellites. Scientists used the light data to determine the precise geographical journey of each shark.

During the winter a male shark named Tipfin traveled more than 2,000 miles from the Farallon Islands off San Francisco to the coastal waters off the Hawaiian island of Kahoolawe. It remained in Hawaii until the next summer. Three other tagged sharks made wintertime migrations to a subtropical area of the Pacific, hundreds of miles west of the Baja coast, where they spent several months lingering in the open ocean. What’s more, the electronic tags also showed that, in the open ocean, the sharks would occasionally dive as deep as 2,040 feet below the surface. The data suggests the sharks divided their time between two primary depth levels: either 15 feet below the surface or between 900 and 1,500 feet underwater.

Researchers are still figuring out what the purpose of these migrations may be. “Such a long migration suggests a possible rendezvous for mating, or a move to feed on different prey,” said LaBoeuf. Meanwhile, the same team of scientists is conducting another study to learn more, and similar satellite studies conducted in other great white hot spots — South Africa and Australia — have documented sharks with a comparably long-range migratory pattern.