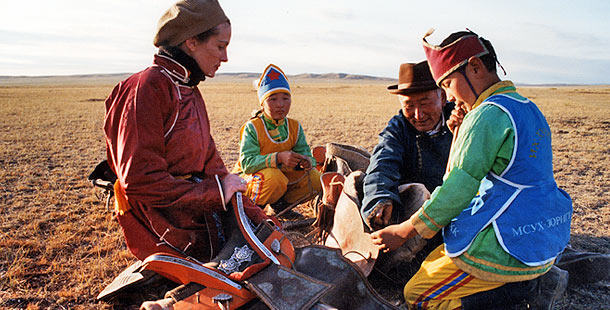 Mongolia’s rolling, windswept plains can be bone-chilling and desolate. But they are also a place of life and excitement. And once upon a time, these unforgiving lands gave birth to great emperors that galloped their way into the history books.

On this episode of NATURE, actress Julia Roberts takes viewers on an intimate trip to Mongolia’s historic hinterlands, where modern nomads still tend their herds of swift horses. NATURE’s Wild Horses of Mongolia with Julia Roberts offers a vivid portrait of these steadfast herders and their spunky steeds, the proud descendents of the last truly wild horses on earth. In scenes that are by turns moving and amusing, Roberts becomes a part of one nomad family, lending a hand when it is time to move camp, and joining in the festivities after a dramatic horse race. Despite their cultural differences, Roberts and her hosts find common ground in their mutual love of horses.

In Mongolia, a landlocked, Texas-sized nation that lies between Russia and China, the bond between people and horses goes back at least a thousand years. Originally, Mongolians may have tamed the horses that thundered across the vast plains in order to harvest their meat and milk — important sources of food in a harsh environment. But the horse soon became just as valuable as a beast of burden, carrying people and supplies across great distances. Warriors quickly realized that they too could enlist horses as a powerful ally in their campaigns, allowing armies to move far and fast.

By the 1100s, in fact, the Mongols were widely revered as master riders, and mounted Mongol warlords were greatly feared by their enemies. But it took one of these tribal leaders, a goat herder born in 1167 named Temujin, to forcibly unite the Mongols under a single king. In 1206, after decades of warfare, Temujin was named the Genghis Khan — or Great Emperor — of the Mongols. By then, he had conquered a swath of central Asia, and his fierce mounted armies were staging major thrusts into Eastern Europe, northern China, and southern Russia.

Genghis Khan died in 1227, short of his goal of dominating Asia and Europe. But he and his successors did expand the Mongol Empire substantially, leaving a lasting mark on history. Indeed, modern China and Russia are in large part creations of the ancient empire, which united many warring factions. By the late 1300s, however, internal strife and the rise of new Asian powers led to the empire’s disintegration.

Today, Mongolia continues its love affair with the horse. Nearly 40% of its 2.4 million people are still nomadic herders, making a living by selling and milking their herds of horses, goats, and sheep. And while another third of the populace has crowded into the capital city of Ulaanbaatar, horse races remain a national pastime, with thousands of fans mobbing major contests, often held at horse-trading fairs. Nomad children even learn to ride the animals — which can be ten times their size — at just two to four years of age.

Ironically, however, Mongolia’s once-revered wild horses no longer gallop free, having succumbed to domestication and hunting decades ago. The last truly wild Tahki — a Mongolian name meaning “spirit” — was spotted in 1968. That was less than 100 years after a Russian explorer named Nikolai Przewalski publicized his “discovery” of the horse throughout Europe. Although the discovery eventually helped persuade the Mongolian government to formally protect the Tahki in 1926, it also spurred strong demand for the animals among European ranchers eager to have a rare animal on their farms. As a result, many Tahkis were captured, ending up on European farms and in zoos. There are less than 1,500 Takhi alive today, with the vast majority descended from just a dozen animals that were caught in the wild around 1900.

Over the last decade, several groups have spearheaded efforts to restore zoo-reared Tahki to Mongolia. But it’s too early to know how restoration efforts will fare. Some biologists fear that inbreeding with domestic horses will ultimately doom the efforts. But many Mongolians are hoping that herds of Tahki will once again gallop across the prairie. Their hoofbeats, some say, is the heartbeat of their proud nation.

Running With The Herd: A NATURE Short Film
The Good, the Bad, and the Grizzly
Voyage of the Lonely Turtle
Super Cats: Episode 1 | Extreme Lives
The Whale Detective
Dogs in the Land of Lions