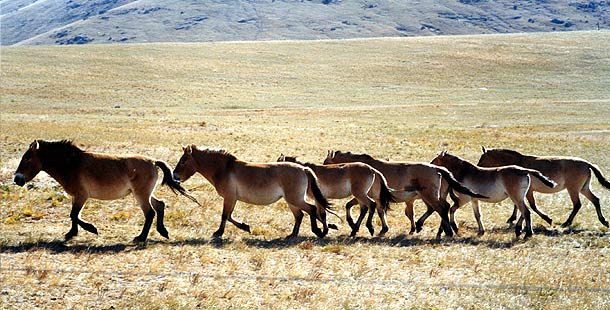 A Texas-sized nation wedged between Russia and China, Mongolia has a long and proud history. It is especially known as the birthplace of the Mongol Empire, which lasted nearly 170 years in the 13th and 14th centuries.

200,000 years ago: The first Mongols
Early inhabitants migrate into the high rolling hills and sweeping prairies of central Asia.

1167: Birth of a legend
Temujin, who would later become the great Mongol leader Genghis Khan, is born.

1183: Ascending the throne
After leading his horseback army to victory over disparate Mongol bands, Temujin is named the Khan, or king.

1227: Death of an emperor
Genghis Khan dies; his empire stretches from modern-day Hungary in central Europe to southern Russia to Tibet.

1242: High water mark
A series of new Khans invade northern China and push further into Europe. The Mongol army retreats while on the verge of conquering Vienna, due to the death of their Kahn. The army returns home in an effort to influence the selection of a new Khan.

1260: Chip off the old block
Kublai, the grandson of Genghis, becomes the new Khan.

1279: Consolidating gains
Kublai Khan unites China, founding the Yuan dynasty. But the Mongol Empire begins to fray at its northern and western edges.

1368: Breakdown
The Mongol Empire disintegrates amidst infighting and attack from outside armies. Over the next few hundred years, Russia and China slowly take control of the Mongol’s former holdings.

1691: Overwhelmed
Modern-day Mongolia comes under the control of China.

1930s: Sphere of influence
Mongolia becomes allied with the Soviet Union, depending on Russia for energy and economic aid.

1990
With the collapse of the Soviet Union, Mongolia becomes an independent nation.

Super Cats: Episode 1 | Extreme Lives
My Congo
Dogs in the Land of Lions
Hippos: Africa's River Giants
The Beauty of Ugly
Deep Jungle: The Beast Within