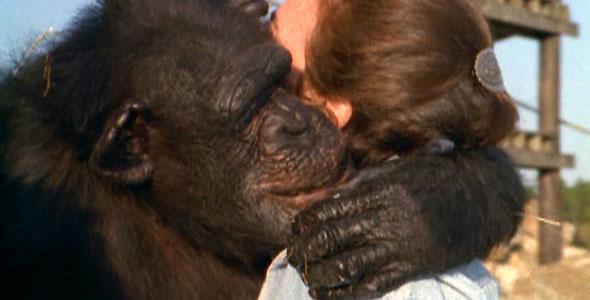 Do you owe your life to a chimpanzee? Over the last century, millions of people have been able to live longer, healthier lives thanks to the medicines and surgical techniques that were tested on chimpanzees — one of humankind’s closest relatives. Dozens of vaccines, for instance, have been perfected on chimps purposefully infected with diseases such as polio and hepatitis.

And other chimps have helped us make major technological leaps, by testing everything from submarines to spacecrafts to make sure they are safe for human use.

Sadly, chimpanzees have received little thanks for the knowledge they have allowed us to gain. Once their work is over, if they survive, their futures are grim: they often live out their lives — which can last nearly as long as humans’ — in cramped cages or laboratories. As NATURE’s Wisdom of the Wild shows, however, people are increasingly joining a movement to create sanctuaries for these “surplus” animals, allowing them to spend the rest of their long lives with greater dignity and freedom.

One of the leaders of the sanctuary movement is Linda Koebner, an animal behavior researcher who once studied how chimps adapted back to life outside the laboratory, and who now works to place hundreds of surplus research chimps in new homes. In Wisdom of the Wild, we watch as Linda is reunited with some the first chimps she worked with 25 years ago, veterans of medical research later released into a Florida refuge. And the show takes viewers to a new sanctuary she is establishing in Louisiana, where she hopes to realize her dream of creating the nation’s first large-scale chimp haven.

Even as Koebner works, however, debates rage about the fate of surplus chimpanzees. In the United States, several groups have sued the federal government and private laboratories in efforts to reduce the use of wild chimpanzees in research, and move those now stored in laboratories to less restrictive refuges.

In October 1999, for instance, the Center for Captive Chimpanzee Care and the Doris Day Animal League won a long-sought agreement with the Coulston Foundation, a New Mexico research laboratory, to free 21 chimps descended from animals involved in the U.S. space program. The controversy began in 1997, when the U.S. Air Force decided to give 111 of the so-called “space chimps” to the research foundation, which critics charged had compiled a wretched record of violating animal care laws. “It is inconceivable that the Air Force would have given these remarkable creatures to the Coulston Foundation for continued research, rather than retiring them to a sanctuary,” famed chimp researcher Jane Goodall said at the time.

The Coulston Foundation was forced to give up 300 of its 650 chimpanzees, however, after the U.S. Department of Agriculture concluded that the laboratory had mistreated the chimps. The agreement was “a big win for these magnificent animals,” said USDA official Michael V. Dunn when the September 1999 deal was announced. It also made it possible for some “very lucky chimpanzees to move to [a] sanctuary,” notes Liz Clancy Lyons of the Doris Day Animal League.

But other chimp battles are far from over. Congress is considering legislation that would limit the number of chimps used in research. Supporters say the move is needed to reduce the incentive for illegally capturing the animals from the wild, and to prevent research that might harm the apes while returning little useful knowledge.

Opponents of the proposed rules, however, say it could hamstring efforts to find treatments for AIDS and other diseases that urgently need cures. Sometimes, notes one biomedical scientist who works with chimps but declined to be named, “there is simply no alternative to using chimps because they are so closely related to humans, and ethical concerns prevent us from doing some experiments on humans. But we should be treating these animals with great respect and care — after all, sometimes our lives literally depend on them. They provide insights we can gain nowhere else.”

The Good, the Bad, and the Grizzly
Voyage of the Lonely Turtle
Super Cats: Episode 1 | Extreme Lives
Equus "Story of the Horse" | Episode 1: Origins
Dogs in the Land of Lions
The Whale Detective