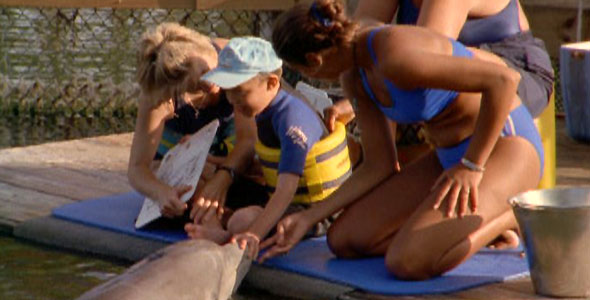 With their curious nature and trademark “smile” — formed by delicately curved jaws — dolphins have become the symbol of the friendly playmate of the sea. Indeed, as NATURE’s Wisdom of the Wild shows, some dolphins do seem to form special attachments with people — including disabled children who fail to respond to other kinds of therapy.

Some parents, in fact, say the chance to swim with captive dolphins has changed their child’s life. Withdrawn autistic children, for instance, have responded to the marine mammals in remarkable ways — forging bonds that have proved difficult with human playmates. The idea, say psychologists familiar with the technique, is that the promise of swimming with such a large and fascinating creature provides an incentive to try different — and sometimes difficult — therapeutic tasks.

One of the prime movers behind Dolphin Human Therapy, as it is known, is David Nathanson, a clinical psychologist living in Florida. In the late 1970s, he used the reward of swimming with dolphins to motivate children with Down’s syndrome to learn. He found that the children who worked with dolphins learned up to four times faster — and remembered more of what they learned — than those in conventional classroom settings.

In the 1980s, “Dr. Dave,” as he became known, organized a dolphin-assisted therapy program in the Florida Keys that eventually grew into a full-fledged center in Key West. Since 1994, it has worked with children from over 37 states and 20 countries.

While some researchers dispute the effectiveness of the program, others say the work with dolphins parallels the success of other animal therapy programs, which use everything from pet mice to racehorses to help people cope with problems in their lives. But dolphin therapy can be prohibitively expensive. To address that problem, Nathanson and others are working on creating a “virtual dolphin experience,” which recaptures the joy and freedom of swimming with the animals using video and computer technologies. If successful, virtual dolphins will eventually allow some children to get at least part of the thrill of the experience without leaving home.