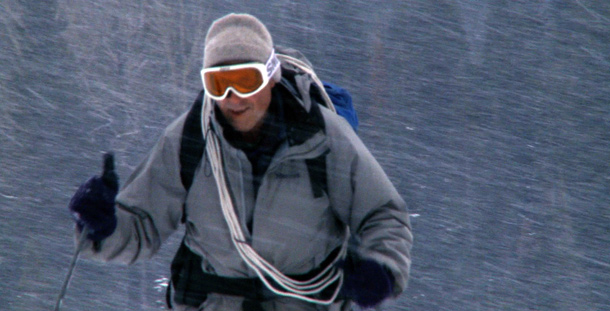 Doug Chadwick seeks out remarkable stories of the natural world and brings them to the public. With ten books and hundreds of articles to his name, he’s traveled the globe from Hawaii to the Himalayas. But it’s when he returns to Montana and hits the wolverine trail as a volunteer with the Glacier Wolverine Project that Doug feels he’s on sacred ground.

Doug Chadwick writes about the elusive wolverine as well as the experience of tracking wolverines through the harshest of conditions in The Wolverine Way.

Using an overhead pole attached to the front of the box trap, I levered the lid open wide. Like most captive wolverines, M1 waited a while, evaluating the sudden change before jumping out. And as usual for him, he didn’t run very far before he stopped cold and looked over his shoulder as if he’d suddenly remembered the beaver carcass left in the trap and was wondering why the hell he shouldn’t go back and take it along with him. He then started circling us at a distance of 40 to 50 feet, pausing to rub his belly and urinate on some alder brush nearly buried in snow, scent-marking the branches. After all, this was his territory. He had a claim to that beaver carcass we’d used for bait.

Marci Johnson, a former assistant on the project who continued to volunteer on breaks from her graduate studies in wildlife, had told me that when she raised the lid on a trap that held M1 one time, he didn’t leap out at all. He jumped atop the front of the box and perched there, regarding her, as if challenging Johnson to make the next move. Her take on M1 was, “He’s exactly what I think a wolverine is supposed to be: fearless.”

Once released from a trap, no wolverine we’d handled had ever attacked us or attempted to bluff us into leaving by making threatening rushes. Still, wolverines have been reported fighting over food with larger carnivores, up to and including grizzly bears. That wolverines were willing to even try driving off a full-grown grizz was astounding. The fact that they sometimes succeeded tended to stick in your mind when one was circling, especially when the circler was a big gnarly guy with anger management issues like M1.

This unprecedented study of the most important population of wolverines left in the lower 48 states had been underway since mid-2002. I was a volunteer… it wasn’t long before all my outdoor clothing and gear began to smell like dead beavers and live wolverines.

To this day, I can’t quite explain what drove me to get involved in the first place. Curiosity, naturally; my life has largely been ruled by a fascination with wild creatures. The fact that I was a wildlife biologist who’d become a journalist and sorely missed doing hands-on research also played a role.

Then there was the lure of the setting itself. Glacier National Park is the centerpiece in the section of the Rockies many call the Crown of the Continent. When I’m away from this tall, never-tamed country, I ache to be back within its folds the way other folks miss home. I chose to live close by the 1,500-square-mile reserve, and it’s never taken much of an excuse to get me out hiking and skiing its contours on a moment’s notice. It makes sense to me to wander around in Glacier purely to air out the soul.

But there was an especially pressing reason to go wandering after wolverines. To use a phrase that sounds shopworn because the words apply to so many life forms these days: The animals are in serious trouble.

Still fairly widespread in the far North, Gulo gulo was also common across northern states from Washington to Montana during the 19th century and occasionally reported from the Great Lakes to New England. Its range continued south along the Pacific Coast range and Sierras far into California and all the way down the Rockies into Colorado and New Mexico. Today, the wolverines of the Lower 48 are confined to a few remote parts of Montana, Idaho, and northern Wyoming, with perhaps a….. dozen more in Washington’s North Cascades. They total no more than 500 and more likely number just 300 or fewer. To make a point about their present status, you could cram all of them into one person’s mountainside trophy home. It would be a snarlfest, but they’d fit.

Part of the predicament for this hunter-scavenger is that it has proved so hard to find and follow that much of its existence remains a blank. The public scarcely knows what a wolverine actually is apart from cartoon versions and trappers’ yarns about the beast. Unfortunately, natural resource managers don’t have much more to go on when deciding how best to promote the species’ survival.

Adding to the urgency is the current rate of climate change. What little was known about the range of wolverines made it plain that they are tied to environments with fairly heavy snowfall and cool year-round temperatures. In southern Canada and the Lower 48, that translates into a number of small, widely separated subpopulations in the alpine and subalpine zones of high mountain ranges, rather than a single continuous population.

To endure over time, though, the animals are going to need wildland corridors that guarantee individuals the freedom to roam from one chain of peaks to the next. As wolverines struggle to adapt to changing weather and shifting habitats in the warmer years to come, linkage zones running in a north-south direction may prove especially vital. Yet before ecologists can identify the best routes – the wildways that hold the most promise for keeping groups connected – many more gaps in our knowledge of the species’ natural history have to be filled in.

Except for mating, male wolverines were said to be strictly solitary – too volatile and vicious to tolerate company of any kind, least of all male company. Females were held to be equally short-tempered and unsociable apart from the six months during which they reared their kits. After that, the young were supposedly on their own. Yet from tracking radio signals on other days, I’d already gathered evidence of older juveniles spending time with their mother now and then. I’d also found M1 traveling with one of his mates outside the breeding season – more than once, suggesting that the pair maintained a long-term bond with each other.

Now I was documenting the case of a year-old youngster, already adult size, that had left its mother and gone on to hang out with Dad for a while – a sort of wolverine version of joint custody. What kind of mammal does that? None that I knew of other than Homo sapiens. What seemed odd was that in the 21st century we understood so remarkably little about one of the most intriguing creatures to ever walk the wild.

The hallmark of our particular era is the startling pace at which humans multiplied to the point of monopolizing much of the biosphere and altering its basic qualities. When Glacier Park was established in 1910, it had about 150 glaciers. Today, with human activities spewing carbon dioxide and methane as if we were intent on re-creating Earth’s ancient atmosphere, a warming climate has reduced the number of glaciers to 25, and those are shrinking three to four times as fast as they were just half a century ago. The last one is expected to vanish by 2020.

I still don’t really understand what makes wolverines tick. But I learned that they tick at a higher metabolic rate than other animals their size. If you were to picture them as organic cruising machines with a souped-up carburetor, you wouldn’t be far off the mark. To hold in the heat of this internal engine, wolverines, like many northern mammals, wear a double coat – a dense inner layer of air-trapping wool beneath a cover of stout guard hairs, which add extra insulation. Textured to resist absorbing moisture, the long guard hairs that drape from wolverines are not only close to waterproof but also excel at shedding frost.

A gulo’s crampon-clawed feet are enormous relative to its body, spreading its weight like snowshoes – a major advantage over most competitors and prey during the cold months. By contrast, long, harsh winters drain the energy reserves of hoofed animals postholing through the snow, leaving some dead to be scavenged and others weaker by the day, more easily overcome for dinner. In steep terrain like Glacier, heavy snowfalls also mean more avalanches, which claim their own share of mountainside grazers. If buried deeply, the carrion keeps like meat in an ice chest until it melts out for gulos to gorge on through spring and early summer. Many of the avalanches replace forests with vertical stripes and fans that start life over as meadows filled with wolverine summer snacks such as ground squirrels and voles. In addition, wolverines cache food in snowbanks and in boulderfields with icy water running underneath.

The list of adaptations that allow wolverines to make an ally of winter is impressive. Yet until scientists started to focus on climate change, no one gave much thought to how creatures with built-in snowshoes, a super-cozy fur coat, smoldering metabolism, and food cached in nature’s refrigerators are supposed to handle swimsuit weather in our ever-toastier Age of Industrial Exhaust.

Combined, these two key requirements – a deep, lingering snowpack suitable for denning plus low to moderate summer temperatures – largely define the wolverine’s native range. Since much of the continent north of about 50 degrees latitude offers suitably frosty environments, the species is fairly widespread in the arctic, the subarctic taiga, and portions of Canada’s boreal forest. Farther south, the animals have to go up in elevation to find heavy winter accumulations of snow, just as they must to reach more tolerable summer temperatures. This explains why the wolverines of the Lower 48 are confined mainly to western mountain regions. The species’ relationship to cold and snow is what ecologists term obligate – it can’t get by without these factors.

Wolverines are emerging as a far more sensitive and more important indicator of global warming than wildlife managers were aware of before. If you want to take this a step farther, you might even be justified in thinking of Gulo gulo as the land-based equivalent of the better-known polar bear.