LYNN NEARY: Now, our Cover Story on the estimated 4 percent of Americans who, according to the Princeton Religious Research Center, call themselves atheist, or nonbelievers in God or a universal spirit. We know what they do not believe in, but what does inform their beliefs, and how do their communities regard them? Betty Rollin of NBC News recently visited a gathering of atheists on the 4th of July. 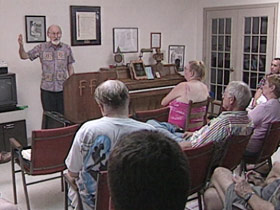 BETTY ROLLIN: Talladega, Alabama, the heart of the Bible belt. Looks like a church picnic, but it doesn’t sound like one.

UNIDENTIFIED MAN #1: Come on, you atheists, let’s see what you can do.

UNIDENTIFIED MAN #2 (Singing): I don’t need Jesus to give me a smile.

ROLLIN: It’s the annual gathering of the Freedom from Religion Foundation, a national organization with about 4,000 members, hosted by its local chapter, the Alabama Free Thought Association. Of the 200 gathered here, many say they were good Christians once. Dan Barker used to preach the gospel until his second conversion took hold. 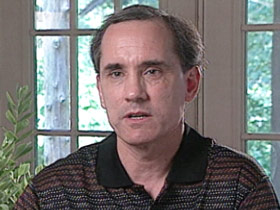 DAN BARKER (Former Christian Minister): But in my early 30s, I discovered this hunger to know what I was preaching about. So I studied. I read the scholars — the Christian scholars. And as I learned more, I realized that a lot of the basis that I was preaching had no base at all. So I migrated across, to fundamentalist to more of a loving evangelical Christian to more of a moderate Christian, eventually, after a few years, to become a liberal Christian [of the kind] that I used to preach against. And finally, I dumped out all the bathwater, and I found there’s no baby there, and there’s no basis for what I was preaching. And I had to be honest and ask myself, do I want God, or do I want the truth? And I went with the truth, and I became an atheist.

ROLLIN: Although most remain invisible, more than a million Americans call themselves atheists. Some of them even come in families. Meet the Warners, from Valley Park, Missouri. Bill is an engineer; Ann, a schoolteacher.

BILL WARNER (Atheist): I don’t believe in a supernatural power because I don’t see any evidence for it. I look upon it as our current mythology.

ANN WARNER (Atheist): I believe that you don’t have to go to church to be a good person. And that’s the way we’re raising our children.

CHRISTINE WARNER (Atheist): My one best friend in my school, she already knows I’m an atheist, and she doesn’t really care that much.

ANTHONY WARNER (Atheist): Ryan, he always says if you don’t believe in God, you’ll go to the devil. 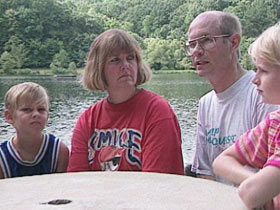 ROLLIN (To A. Warner): Somebody said that to you?

A. WARNER: Ryan did.

ROLLIN (To A. Warner): And what did you say? What do you think about that?

ROLLIN: But for some families, being criticized for atheism is no joke.

UNIDENTIFIED MAN #3: People are very violent about it in the rural areas.

ROLLIN: So violent that this man says he doesn’t dare show his face. His wife once admitted they were nonbelievers to a neighbor.

MAN #3: Her daughter found out and told everybody at school the next day, and my daughter was attacked on the bus.

MAN #3: The students on the bus of all ages.

MAN #3: Slugging her, punching her. 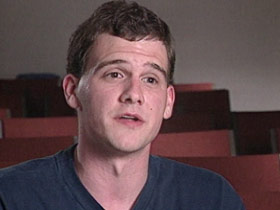 ROLLIN: Adam Butler heads an atheist group at the University of Alabama. He’s been threatened and ostracized by religious friends.

ADAM BUTLER (University of Alabama): If someone finds out, it gets around that Adam doesn’t believe in God anymore, nobody wants to talk to you, and nobody wants to be around you, as if it’ll rub off.

Mr. BARKER: So atheism is like a big scarlet A. We feel that religion is the cause of so much harm and divisiveness. Look at these bombings, look at the terrorists, look at the abortion clinics. They’re doing it in the name of God, and they’re calling it good.

UNIDENTIFIED WOMAN: Jesus promised to come back to his own generation several times, you know — didn’t quite make it.

ROLLIN: But these folks don’t just talk about their beliefs or lack of them, they practice what they preach, involving themselves in First Amendment battles. Whenever a separation of church and state is threatened, the freethinkers are there.

The most recent conflict in Alabama involved a judge displaying the 10 commandments in his courtroom. And when the Supreme Court decision came down in 1963 that removed prayer from public schools, that case was spearheaded by the then head of the American Atheist Organization, Madalyn Murray O’Hair, who was promptly voted the most hated woman in America.

MADALYN O’HAIR (American Atheist Organization): No federal official may ask you what your religion is. 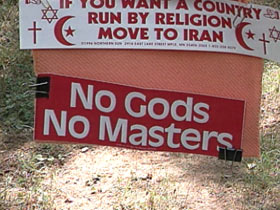 ROLLIN: Three years ago, she became equally unpopular among her followers when she mysteriously disappeared, along with several hundred thousand dollars.

UNIDENTIFIED COMMENTATOR #1: Fear is a core value of religion, okay? They exploit fear.

ROLLIN: But the organization lives on. Based in Texas, the American Atheists have a weekly cable television show and a Web site. The leaders are first to admit, however, that atheism has never caught on in this country. Partly, they say, that’s because atheism has often been linked with communism. And it’s true that most communist regimes, like the former Soviet Union, have not permitted religious expression.

Some atheists join organizations in order to stop what they see as a dangerous erosion in the separation of church and state. Some just want to be tolerated and understood. But they are all faced with the same question. If you don’t believe in God, what do you believe in?

Mr. B. WARNER: I believe that people are basically good. And we don’t need a God to make us good.

C. WARNER: Most of the time I believe in what I see evidence of.

Mr. BARKER: We feel that we are improving the world. We feel that reason and kindness, more of that and less superstition, less nonsense, would be better for the world.

ROLLIN: We pride ourselves on religious tolerance in America. Yet as more and more Americans count themselves among the religious, there is no indication that tolerance for the nonreligious will grow. I’m Betty Rollin for RELIGION & ETHICS NEWSWEEKLY in Talladega, Alabama.