BOB ABERNETHY: And finally, evangelist Billy Graham celebrates his 80th birthday on November 7th. Graham declined suggestions for a big party, saying the birthday he really wants to celebrate will be his 100th. While most 80-year-olds have long retired from their chosen line of work, Graham continues with his ministry. But as Kim Lawton reports, his organization is thinking about the future.

KIM LAWTON: He’s preached the gospel to more live audiences than anyone in history, more than 210 million people in 185 countries. 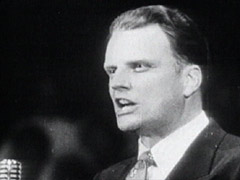 LAWTON: He’s participated in every presidential inauguration since Lyndon B. Johnson. And he’s been a friend and counselor to numerous presidents, including a special relationship with Richard Nixon. Arguably, he’s one of the most influential men of the 20th century. But as Billy Graham turns 80, there’s a new poignancy as well: the progression of age and Parkinson’s disease, faltering steps and awkward movements, often aided now by a cane.

Professor RANDALL BALMER (Columbia University): Age is certainly catching up to him and we’re facing now, I think, the end of an era.

LAWTON: Graham’s ministry is slowing down, but he says he has no intention of retiring until God retires him. Just two weeks ago, he held a crusade in Tampa. It was a vintage Graham crusade, complete with high-powered guests, and the evangelist showed he’s keeping up with the times; the crusade, including an appearance by the chart-topping rock group Jars of Clay, was broadcast live on the Internet. 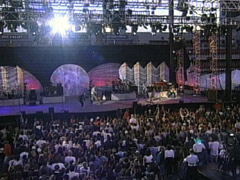 Billy Graham can still pack stadiums like this one, but many wonder whether mass evangelism is viable after him. At a time when people seem to be seeking more individualized spirituality, is the age of stadium crusades coming to an end?

Dr. JOHN R. CORTS (Billy Graham Evangelical Association): Sure it is, in one sense of the word. That is, it’s coming to the end as far as Billy Graham is concerned. He’s 80 years of age, and obviously, he can’t keep going for another 50 years. But I would say that as far as mass events are concerned, that has been there throughout history, all the way back to the time of Christ when there were great multitudes of people, and they’re still there.

Prof. BALMER: And I think they will remain so as long as sporting events are popular. People like big events. People like the feeling of being in a crowd where something really exciting is going on.

LAWTON: But the Billy Graham Evangelistic Association, the Minneapolis-based ministry Graham founded in 1950, is preparing for the inevitable. Franklin Graham, who conducts his own crusades and heads a Christian relief group, will eventually succeed his father as chief executive officer. 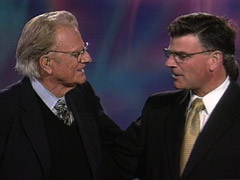 Dr. CORTS: Now Franklin will have organizational responsibilities to continue or to lead the organization in whatever direction it should go. What the ministry direction is going is something born of God and something we can’t really predict or even try to manipulate.

Prof. BALMER: If he tries to follow his father’s program in a kind of lockstep sort of way, he’s going to be disappointed and probably will fail, which is no judgment against him. It’s just that Billy Graham has been such a pioneer and such an important and charismatic and much-loved figure in America and throughout the world.

LAWTON: The BGEA oversees many projects, including crusades for several evangelists, but much of the work has been focused on Billy Graham, and ministry officials acknowledge the organization may not go on forever.

Dr. CORTS: We’re here to serve God’s people, and our hope for the future, both that of Mr. Graham or Franklin Graham, the board of directors, and everyone that works here, is that God will show us what his direction for the future is, and we’d like to be responsive to it.

Dr. GRAHAM (Excerpt From Previous Crusade): You come, young, old, whoever you are.

LAWTON: For now, Graham has announced crusades next year in Indianapolis and St. Louis. And in the year 2000, he’s planning a huge conference in Amsterdam for worldwide itinerant evangelists. But, he says, his future is ultimately in God’s hands.

Dr. GRAHAM (Excerpt From Previous Crusade): I know I’m going to heaven. Why? Because of what Christ did on the cross and what he did by being raised from the dead.

ABERNETHY: Those close to him say Graham is indeed thinking a lot about heaven these days. He’s writing a book on the subject.