Correspondent Deryl Davis takes a look at the new guidelines that require prominent placement of the tabernacle (a receptacle for the consecrated elements of the Eucharist) and baptismal font. He also talks to Archbishop Oscar H. Lipscomb, chair of the Bishops’ Committee on Liturgy and Duncan Stroik, editor of SACRED ARCHITECTURE MAGAZINE and associate professor of architecture at the University of Notre Dame. 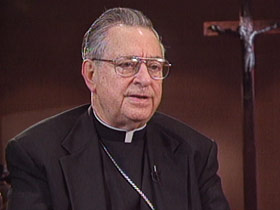 DERYL DAVIS: Which is more conducive to worship … grandeur or simplicity? A sense of the past, or a glimpse of the future? The bishops’ document responds to these questions in an attempt to build consensus on appropriate church styles.

Archbishop OSCAR LIPSCOMB: “Built of Living Stones” is an effort on the part of the body of bishops to address in a contemporary, and I think, effective fashion, developments in art, architecture, and the building and restoration of churches for the present.

DAVIS: The bishops’ new document is a response to decades of architectural experiment and debate which followed the sweeping reforms of Vatican II in the 1960s. Reflecting a new emphasis on communal worship, churches moved the altar forward from the back wall and began to incorporate non-traditional elements such as semicircular, or angular, seating.

In a bid for simplicity, some congregations removed statues, images, and stained glass windows, traditional elements of catholic worship. Others moved the tabernacle, which houses the communion bread, blessed as the body of Christ, from the heart of the sanctuary to a less central location. Conservative critics say these changes were more than cosmetic — that they stripped churches of the element of transcendence, or mystery, so important to Catholic tradition. Church architect Duncan Stroik has problems with the new style. 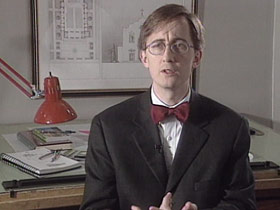 DUNCAN STROIK (Church architect): It tends to focus on the assembly, that the church is the people, and therefore transcendence, really, there’s no place for that. It tends to be focused more on the people of God than on God himself.

DAVIS: “Built of Living Stones” endorses no specific architectural style, but emphasizes the theology and symbolism inherent in church structures. It makes suggestions, but not requirements. Still, some liberal critics worry the document signals a backward shift to the more conservative architectural style and liturgy of the pre-Vatican II era. The document’s sponsors say such views are wrong.

Archbishop LIPSCOMB: One complains, one side, that we’re repudiating all that has been done since Vatican II and going back to an earlier form of art and architecture, and the other is, as you say, that we’re even going farther off to the austere and the barren … I think both are wrong, like most extremes.

DAVIS: Architects and planners say a general directive on church architecture is long overdue. But, there is disagreement about how effective “Built of Living Stones” will be, since it offers theological principles and not architectural blueprints.

Archbishop LIPSCOMB: Our document is doing its best to stay in the mainstream of where the Catholic Church wants to direct and guide its worshippers, and those who will construct the edifices for worship so that they’ll be both contemporary and effective and do what a church is supposed to do for people who are praising and worshipping God.

DAVIS: However parishes choose to interpret “Built of Living Stones,” Catholic leaders say the central issue is clear: not whether a church is modern or traditional, but whether it works.