BOB ABERNETHY: One of the most difficult of all religious teachings -- especially in a time of war -- is the importance of forgiving, even an enemy. Forgiveness is taught as something a person should do for God or for others. But, more and more, both religious and secular counselors are encouraging forgiveness as essential to the healing of the person wronged. Lucky Severson has our cover story.

LUCKY SEVERSON: Steve and Maurine Young adopted their first dog to ease the pain after their 19 year-old son Andrew (pictured at left) was murdered in 1996.

MAURINE YOUNG: I knew that I felt I was in prison -- a self-made prison. I was going to get my revenge.

SEVERSON: Andrew died in the arms of his twin brother Sam, after he was shot through the heart by Mario Ramos, a Chicago gang member who thought, at first, that Andrew was a rival gang member. He wasn't. Andrew's tight knit family, including three brothers, came undone. 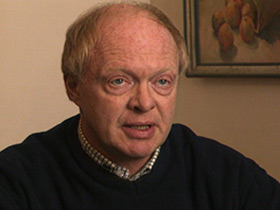 STEVE YOUNG: I just collapsed to my knees and I said -- "you [Maurine] were next to me" -- and I said, "If I could just walk into the kid's cell right now, I would just snap his neck in half."

MARIO RAMOS: I was just another person getting locked up, you know. I didn't think about him that much.

SEVERSON: Mario and his family belonged to the St. Nicholas Catholic Church in Evanston, Illinois, where he was once an altar boy. Right after the crime, Father Robert Oldershaw went to visit Mario in prison.

Father ROBERT OLDERSHAW: He had done a terrible thing. I am the pastor -- his pastor. And this is a spiritual son.

SEVERSON: It was Father Oldershaw who brought Maurine and Mario together -- the mother and the boy who killed her son.

Mrs. YOUNG: And I would rather have just killed him too. But I looked at my Bible and it just kept saying forgive your enemies. And I said, you know what God? I know enough about you when you tell us you have to do something you not only give the command, but you give us the power to do it at the same time. So here I am. I give you my hate, my revenge. In return, I want your ability to forgive.

SEVERSON (to Mrs. Young): So this is a letter you wrote to Mario. "I don't know whether you would ever feel up to asking for my forgiveness for killing my son. So I'll go first. I forgive you."

SEVERSON: Some of Maurine Young's relatives and neighbors thought she was crazy. How could a mother forgive her son's killer? In Western culture, and in many Christian denominations, forgiveness is often viewed as something we do for the guilty.

But behavioral scientists are now learning that the real benefit is to the forgiver. 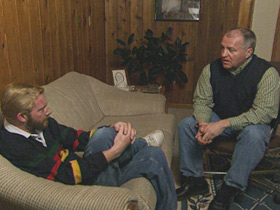 SEVERSON: Dave Mack is a psychologist at the Mendota Mental Health Center in Madison, Wisconsin. He says forgiveness is proving to be an effective treatment for drug addictions.

Dr. MACK: They've experienced hurt, and somehow they haven't been able to deal with or resolve that hurt. And what we try to do is help them focus on the fact that sure, what the person did was wrong, it was unfair, it was hurtful, but you continue to pay the price as long as you carry the resentment around.

I feel like I found a tool that's effective to work with people in an area where I hadn't been able to work with them successfully before.

SEVERSON: Mack, who is also a pastor, says too many churches fall short [when it comes to] explaining and teaching the principle of forgiveness.

SEVERSON: There are critics of using forgiveness as a treatment, like Jeffrie Murphy, a philosopher at Arizona State University. He thinks that "forgiveness" has been overrated and over used.

JEFFRIE MURPHY (Arizona State University): I think there is a lot of, kind of, irresponsible babble about forgiveness these days. And when forgiveness is talked about too frequently and in too shallow a way, and becomes a kind of universal hasty prescription for all wrongdoing, then I think the value of forgiveness becomes cheapened.

But Dr. Robert Enright, a professor at the University of Wisconsin and a pioneer in the field of forgiveness studies, says there is nothing shallow about true forgiveness.

Dr. ROBERT ENRIGHT (University of Wisconsin): You learn to forgive by first taking time. If someone wants the forgiveness pill, its not going to happen. It is not an easy road.

SEVERSON: Dr. Enright is often invited to war torn countries to counsel survivors. He thinks forgiveness will work in marriage counseling and for victims of spousal abuse and incest. 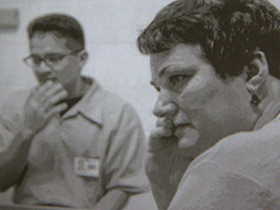 SEVERSON: But Maurine Young did more than just talk. She studied the Bible, she anguished, she finally wrote a letter of forgiveness, and that still wasn't enough.

Mrs. YOUNG: I wrote that letter, and I wanted to go see him. It was one thing to put it in letter form. It is another thing to deliver forgiveness in person.

SEVERSON: But at that stage, Mario was suicidal, not ready to meet Maurine until he did what a lot of inmates do -- he found God.

RAMOS: What I actually did to him. That dawned when I became a Christian. When I actually changed, you know, that is when I really thought about it.

SEVERSON: Finally, a year and a half after the letter, Maurine visited Mario in prison.

RAMOS: What would be her reaction? Would she stand up and hit me and slap me and call me murderer?

Mrs. YOUNG: The first time I met him he was trembling -- you know, crying and [finding it] hard to face me. A person who is devastated at the reality of what he had done and facing the mother. I forgave him in my heart and I felt relieved, like I had just gotten out of jail or something.

SEVERSON (to Father Oldershaw): Why is forgiveness so important?

SEVERSON (to Mrs. Young): When you forgive somebody do you lose the anger? 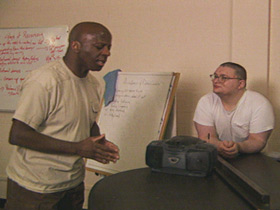 Mrs. YOUNG: No. No. It's okay to be angry because this was a great injustice that was done to us. But take that anger and use it for good.

SEVERSON: These three inmates have been part of a forgiveness study for the past year at the Wisconsin State Mental Hospital.

Dr. GARY MAIER (Psychiatrist): These fellows, they all have a serious history of physical or sexual or emotional abuse.

SEVERSON: Psychiatrists Gary Maier and Robert Chapman have been prodding these inmates, who have committed horrible crimes, through a process of forgiveness. The hope is that if they can forgive their abusers, they will be less likely to commit crimes again.

Bruce was abused by his father, whom he later murdered.

Have you forgiven yourself?

SEVERSON: Did you forgive your father?

BRUCE: I am in the process of doing that, but I feel so much lighter, so much more at ease with myself when I forgive somebody. So even though I haven't forgiven my father, I have forgiven other people

Dr. MAIER: Research has shown real statistical improvement in these patients, so we are encouraged by that.

SEVERSON (to Ramos): Her forgiveness, has it made it easier to serve time here? 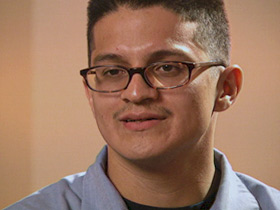 RAMOS: Yes, it has actually, you know, but it's still a struggle. It's not an everyday, "Oh, I wake up with a joy and a big smile on my face." No, things still happen, and I am still here.

Mrs. YOUNG: I know how it has empowered me. I was not a very forgiving person before this. I held grudges -- long grudges. I didn't really realize how unforgiving I was. I could be downright nasty, and it was eating me up. And when God gave me this gift of forgiveness of for Mario, it dawned on me. Like a light bulb went off.

SEVERSON: After five years, Steve has also forgiven the killer of his son. He says the relief from hatred he experienced persuaded him to write a book and share with other grief-stricken families what he has learned from the healing powers of forgiveness.

One of the most difficult of all religious teachings is the importance of forgiving. Forgiveness is taught as something a person should do for God or for others. But, more and more, both religious and secular counselors are encouraging forgiveness as essential to the healing of the person wronged.