BOB ABERNETHY (anchor): Last year, just over 500 men were ordained as Catholic priests in this country — about half the number ordained in 1965. One of the reasons for the current shortage of priests is that so many men have left the priesthood to get married. Because of that, some have suggested that the Church consider making priestly celibacy optional.

To average Catholics, it may be hard to imagine their priest with a wife and children. But, to a limited extent, it is already happening. Judy Valente reports.

JUDY VALENTE: Most Catholics have never seen this before: their priest, at Mass, wearing a wedding ring — with his wife and children looking on from the pews. 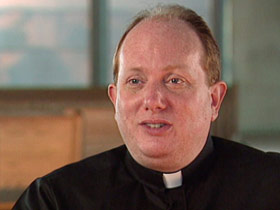 His name is David Medow. And until 10 days earlier, he had been a Lutheran minister.

(to Father Medow): Did you grow up with much knowledge of Catholics?

FATHER DAVID MEDOW (St. Mary Immaculate Church, Illinois): I grew up with no knowledge of Catholics, other than seeing these exotic blue-dressed figures walking in the streets of my neighborhood in Chicago going to a local parochial school.

VALENTE: Before he could be ordained, Medow had to spend two and a half years in Catholic seminary. He represents a small but potentially significant phenomenon in the Catholic Church: the ordination of former Protestant clergymen — who are married.

FATHER MEDOW: I loved being Lutheran. But God has called me into this community, and I really had grown into being Catholic in many ways. Not only spiritually but theologically. 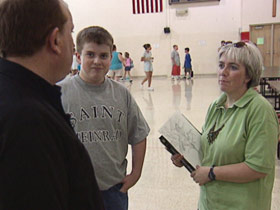 VALENTE: (to Mrs. Jane Medow): How have you been welcomed in the parish?

HANNAH MEDOW (Daughter): A lot of kids have come up to me and gone, like, “Whoa, your Dad’s gonna be a priest.” And they were really surprised.

NIKOLAI MEDOW (Son): We really did this as a whole family. And that’s what makes it what it is: a family journey.

FATHER MEDOW: Many folks have wondered, well what’s gonna happen to Jane, my wife, after I’m ordained. As if somehow we will have to either separate or whatever. I’ve jokingly said to some people, “Well, she’ll have to go to a convent, and we’re distributing our kids to various religious communities.” 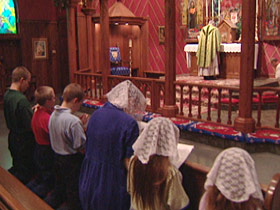 VALENTE: Father Christopher Phillips, of San Antonio, had been an Episcopal priest. His transition to Catholic priesthood was easier because Episcopal seminary training is similar to that of Catholics.

In the early 1980s, after the Episcopal Church had approved women’s ordination and other liberal policies, Phillips and about 20 other Episcopal priests petitioned the Vatican to let them become Catholic clergymen. Pope John Paul II said “Yes.”

FATHER WILLIAM STETSON: The specific issue was the question of the ordination of women. I believe these men felt that that was a significant departure from [the] universal tradition of the church, which one branch of the church could not reach on its own. These were also men holding a strong belief in tradition.

FATHER PHILLIPS: For me the biggest issues were the moral issues. The right to life, [the] abortion question, contraception, a number of things like that.

Father Phillips has five children — two of them born since he became a Catholic priest. The acceptance of Father Phillips and other married men as priests has raised questions about the rule that requires other priests to be celibate. 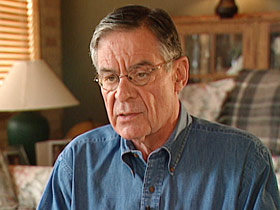 MR. RICHARD SIPE (Former Benedictine priest): I think it shows the contradiction in the church’s teaching.

Richard Sipe was a Benedictine priest for 18 years. He is also a psychotherapist who has counseled members of the clergy.

VALENTE: The Church defines celibacy this way: as a special gift from God by which sacred ministers can adhere more easily to Christ with an undivided heart and can more freely devote themselves to the service of God and humankind.

Sipe calls celibacy an ideal, but often not a reality. 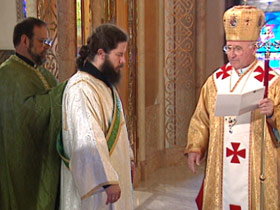 VALENTE: The Church itself has said that celibacy is not essential to the priesthood. In fact, the Vatican recognizes the married clergy in the eastern Catholic churches of the Middle East, Africa, and Eastern Europe. Here at a Ukrainian Catholic Church in Chicago, James Bankston is being ordained a deacon, as his wife and two young daughters watch. He could become a priest next year. The Eastern churches have always had the tradition of a married clergy.

FATHER RICHARD KIROUAC (Ukranian Catholic priest): Celibacy was seen as the vocation of the monk. It is a special charism. It is [a] gift given by the Holy Spirit for those who are able to accept it. The authentic tradition would see that as a gift of love, and love cannot be legislated.

Even though the monastic life was an ideal, it was also recognized very clearly that sanctification could come through married life.

VALENTE: Even in the Roman Church, celibacy was not made mandatory until the 12th century. It is a vow that men like these could not keep. They left the Catholic priesthood in order to marry. They want to be priests again.

(to Ron Crowley-Koch): Do you think it’s right for the Catholic Church to ordain these married protestant clergymen as Catholic priests? 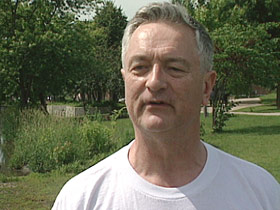 MR. RON CROWLEY-KOCH (Former priest): I take it as a slap in the face. Here I am, a Catholic priest, went through the seminary, was a priest for six years. I fell in love and got married. The irony is that if my wife would die, they’d welcome me back with open arms.

VALENTE: A study by Catholic University in Washington has estimated that making celibacy optional would quadruple the number of priests. But according to Richard Sipe, a married priesthood threatens the power structure of the Church.

MR. SIPE: If you have a group of people, one sex, with a central organization, none of these men have commitments to wives, to children — they have only a commitment, authoritarianly, up and down [to] this structure. It seems so clear to me how powerful that is, how hard it is to change.

VALENTE: Among the married men who have become Catholic priests, Christopher Phillips is an exception in that he is pastor of his church. Normally, married clergy are given lower-profile assignments — as chaplains or teachers — not parish work. 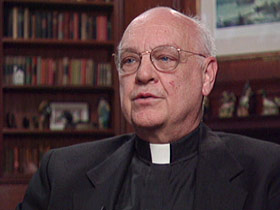 FATHER STETSON: I think the reason is so there is not confusion in the minds of the Catholic faithful with regard to the question of celibacy.

VALENTE: Father Phillips’s parishioners don’t seem to have a problem with his married status.

MS. PEGGY HUMM (Parishioner): I think the parish is very supportive, not just of his role as a married priest but also of his family’s needs.

VALENTE (to William Kirkpatrick): Do you [think] the Catholic Church should allow priests the option to be married?

MR. KIRKPATRICK: Because most of them have dedicated themselves to their parishioners and that’s the way it should be.

VALENTE: But it doesn’t matter to you that Father Phillips is married. You think he’s doing a good job. 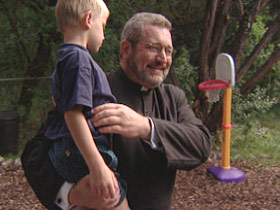 MR. KIRKPATRICK: Yeah, but he was married before he became a Catholic.

VALENTE (to Father Phillips): How have your brother priests responded to you, those priests who’ve taken the vow of celibacy?

FATHER PHILLIPS: There may be some resentment among some of them, but at least they’ve had the decency not to say it to my face if there is any.

VALENTE: Father Medow was also given a high-profile position — that of assistant pastor — because his bishop needed another parish priest. Although there is a severe shortage of priests, the number of married Protestant clergy coming into the Church is too small to make a significant difference.

FATHER MEDOW: If bishops here in this country thought this was the answer, they’d be out recruiting Protestant clergy. But they’re not.

VALENTE (to Father Medow): Do you think we should have a celibate priesthood? 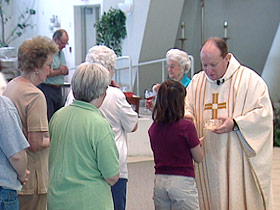 VALENTE: It costs more to have married priests. Father Medow is paid more than other diocesan priests, and he lives in a home owned by the diocese. Father Phillips also lives in a home provided by his diocese. But he is paid only $7,000 a year. How will he educate his five children?

FATHER PHILLIPS: When the various times come, I have no hesitation whatsoever in saying — look, as a priest of the church, if my child wants to go to a Catholic college, will I go to the president and say, “Look I’m a Catholic priest with a family, don’t make a lot of money, is there something you can do for this child?”

VALENTE: The pressure for optional celibacy may be a growing idea, but Church practice is not likely to change anytime soon. And yet, the presence at the altar of even a few married priests, like these former Protestants, can only fuel the debate.

For now, in a handful of Catholic churches and institutions around the country, the word “father” — normally used to address a priest — has taken on a double meaning.

For RELIGION & ETHICS NEWSWEEKLY, this is Judy Valente in San Antonio.