BOB ABERNETHY: One of the consequences of the Holocaust was its effect on the faith of observant Jews. How could a just God have permitted such a tragedy? Today, the personal story in his words, of Menachem Daum, a New York television producer, whose parents were both Holocaust survivors. Daum has explored these issues of faith with survivors including his aged father.

Mr. MENACHEM DAUM: A Hasidic master once said, “A God who limits himself to actions that we humans can understand couldn’t possibly be God.” Essentially, that was my father’s approach to the crisis of faith raised by the Holocaust.

However, that was not the approach taken by my mother. On my mother’s tombstone, we inscribed that she endured much suffering. This was our way of asking God to forgive her sins. In effect, we were saying she already suffered enough for them in this world.

However, I don’t think my mother felt the strong need for God’s forgiveness. On the contrary, she told me when she’s called before God in final judgment, she will turn the tables. She will demand to know why he stood by silently during the Holocaust as her large family was being destroyed.

Her mother, two brothers and six sisters, her first husband, she had a son before the war, his name was Avrohom. So at least we have some recollection of who they were.

Just a few months after the liberation, my parents, Moshe Yosef Daum and Fela Nussbaum, were married in a displaced persons camp in occupied Germany. They named me Menachem which means consoler or comforter. Apparently, they hoped I might be able to restore some happiness in their lives. 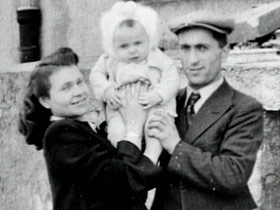 Actually, the happiest time in my mother’s life, she once told me, had been the year she spent as a student in Beis Yaakov, the network of Orthodox schools for girls in prewar Poland.

My mother told me she retained the pure faith of a Beis Yaakov girl until she got off the train at Auschwitz, but she never spoke about what actually happened on the train ramp that forever shook her faith. My mother had arrived at Auschwitz with her sister, Bluma. Many years later, my aunt Bluma revealed to me that my mother had her infant son in her arms. As they were roused out of the train, a veteran Jewish prisoner hurriedly came up to them. He knew mothers who were together with their young children would soon be directed to the gas chambers. He urged them to do the unthinkable.

Ms. BLUMA POSNER: (Foreign language spoken) “Give up the child. Hurry. We can’t stay here too long. We know what we are doing. Give away the child. You are still young trees. You can have more fruit. Because of the child you too will go. Give away the child.” A prisoner came from behind us and grabbed the child from Fela’s arms. She felt the child being taken from her. She said “Oy, vey. The child hasn’t eaten anything. Bluma, maybe we can still send him some food?” I tried to calm her down. I told her, “You’ll see, today they’re taking everyone separately, children, young people.” I made excuses but I knew what was happening.

Mr. MENACHEM DAUM: At the Passover seder, my mother would get annoyed as my father recited the Exodus story. She would ask him, if God did so many miracles during biblical times, then why hadn’t she seen any such miracles during the Holocaust? 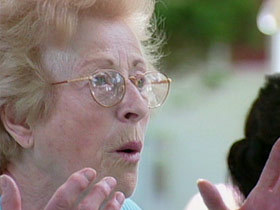 Ms. DORA LEFKOWITZ: I cannot see a God who will allow a little baby to be killed for no reason at all. And I really lost my belief then, right there and then. I had one sister and two brothers. I was the oldest and the only survivor of my family. Why? What did they do so terrible that they had to perish? I think if God is so great and so powerful, he could have struck Hitler down before he killed so many Jews. That’s my feeling.

Mr. MENACHEM DAUM: In the early 1950s, just as my father was on the verge of realizing the American dream, he gave up a good job in upstate New York and moved his family to Brooklyn. He did so in order to send us to yeshivas and give us a religious education. Most of my yeshiva classmates were, like myself, children of survivors. Our teachers, survivors themselves, never mentioned the Holocaust. I suspect that, like my parents, they too had no answers to offer us.

(to Father) Dad, we’ll pray, yes? We’ll put on the prayer shawl and tefillin. Yes? We are going to put the tefillin on your hand. 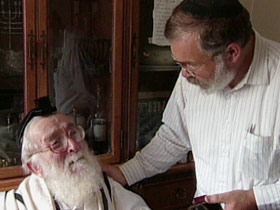 According to Jewish religious law, my father’s physical condition exempts him from the need to put on the tefillin. However, I know how much this ritual means to him. During the Holocaust, he was also exempt from putting on the tefillin. And yet in the ghettos and forced labor camps, he risked his life in order to do so.

“Blessed art Thou, O Lord, Our God, Master of the Universe, who has sanctified us through His commandments and commanded us to put on the tefillin.”

(to Father): You put on tefillin the Skarzisk camp?

Mr. MENACHEM DAUM: I try to continue my parents’ ways, but to be honest, I do it more out of respect than out of conviction. I really don’t understand my father’s faith. I don’t understand why he would risk his life in the camps for a God who had seemingly abandoned him. Nor do I understand my mother’s strange combination of faith and doubt. How she continued to observe the commandments of a God she could not forgive.

Prof. HERTZBERG: But there is an answer. To me, the miracle of Jewish history as a whole, is our capacity to begin after tragedy, after disaster.

ABERNETHY: Menachem Daum also passed along this story. A Hasidic rabbi lost his wife and 11 children in the Holocaust. Afterwards, he was asked, “Why did miracles occur only during biblical times? Why don’t they happen in our time?” The rabbi replied, “The fact that there are Holocaust survivors who, after all they endured, can still keep faith, is itself, the greatest miracle of all.”