BOB ABERNETHY, anchor: The anniversary of 9/11 came in the midst of the growing debate about whether the U.S. should launch a unilateral, preemptive strike against Iraq.

This week, Kofi Annan of the UN said there should be no such attack without a UN Security Council okay. And more religious voices agreed, among them 48 prominent U.S. Christian leaders, the top foreign affairs official at the Vatican, the Jesuit magazine AMERICA, and the Council on American Islamic Relations. Also, the top staff person of the Board of Church and Society of the United Methodists, President Bush’s denomination. General Secretary Jim Winkler said he considers it “inconceivable that Jesus Christ … would support this proposed attack.”

We want to identify the religious and moral arguments for and against a preemptive strike with Shaun Casey, Professor of Christian Ethics at Wesley Theological Seminary in Washington; Jack Moline, Rabbi of Agudas Achim Congregation in Alexandria, Virginia, and a Vice President of the Interfaith Alliance; and Richard Land, President of the Ethics and Religious Liberty Commission of the Southern Baptist Convention, who joins us from Nashville, Tennessee.

BOB ABERNETHY: Dr. Land, let me begin with you, in Tennessee. What are the moral and scriptural arguments for a preemptive strike? 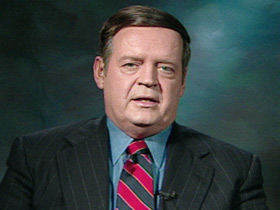 Dr. RICHARD LAND (President, Ethics and Religious Liberty Commission, Southern Baptist Convention): Well, I believe just war theory is based upon an understanding of Scripture and Christian tradition over these last 20 centuries. And I believe just war theory first of all says it must be defensive. And I believe we are defending ourselves against several acts of war by a man who does not keep treaties and who has already used weapons of mass destruction. And I believe that Romans 13 tells us that God ordained the civil magistrate to punish those who do evil and to reward those who do that which is right. And so, there is recognized use of lethal force by the civil magistrate. And while I would be happy to have UN Security Council support for this, for the United States of America, the appropriate authority is the government of the United States.

ABERNETHY: Professor Casey, what are the moral arguments against a preemptive strike?

Professor SHAUN CASEY (Professor of Christian ethics, Wesley Theological Seminary): Well, with all due respect to Dr. Land, the just war ethic begins with a presumption against any use of force. The burden of proof rests on the person who wants to go to war. And there are a number of thresholds you have to meet in order to have a moral cause and a moral justification and there are three or four of those that aren’t met in the current situation. Most Christian leaders, most Christian ethicists today, in fact, do not believe that the just war criteria are fulfilled in a preemptive war against Iraq at this time.

ABERNETHY: Why not — what’s the most important problem? 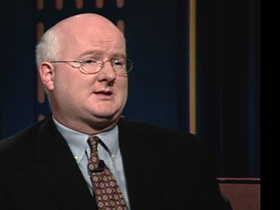 Prof. CASEY: Well, there are a number of problems. One, you don’t want to normalize the notion of preemptive war — defensive war is allowed. Secondly, war must be a last resort. You must try and exhaust all peaceful alternatives to war — we haven’t done that. Finally, there’s the criteria of proportionality — that the good you want to achieve has to outweigh the evil that you might incur in the process. The fear is, if we go to war preemptively, that will give license to other nations around the world to go to war — India and Pakistan is one example.

ABERNETHY: Rabbi Moline, where do you come out? You serve a conservative congregation, not reformed or orthodox. What does your tradition say?

Rabbi JACK MOLINE (Agudas Achim Congregation, Alexandria, Virginia): We have conflicting values here as well; it’s hard to make a decision. Our tradition through the Talmud indicates that if someone is coming to kill you, you should rise up early in the morning and kill him first. It’s not a case that you have to wait to be attacked before you can act in self-defense. On the other hand is our concern for innocent life — the concept of “Pikuach nefesh” — of saving a soul. If these weapons of mass destruction are deployed because we are not entirely successful in our objectives in Iraq, the first people to suffer are going to be the people of the Middle East, particularly the Israelis and the Palestinians.

ABERNETHY: And you have a special concern about that? 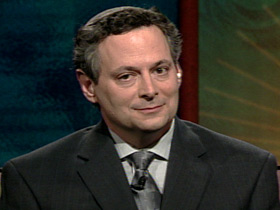 Rabbi MOLINE: I have a particular, special concern. And I think Muslims around the world and here in America have that concern as well — in a way that Christians may not.

ABERNETHY: Richard Land, in Nashville, where do you come out on specifically targeting a foreign leader as the person that you want to, as we say euphemistically, to “take out?”

Dr. LAND: Well, I think there are some leaders who are so far beyond the pale and have done such murderous actions and intend to do far more murderous actions, that it is justifiable to take them out — to remove them from power if necessary — take their lives. Dietrich Bonhoffer came to this decision when he was supporting a plot to kill Hitler in 1944, and I hope that I would have had the courage to do the same thing. And I do not believe this is a preemptive strike. Iraq is in violation of numerous treaties. And I want to go back to history and look at if, when Germany tried to reoccupy the Rhineland against all of the treaty agreements they had signed — if the Allies had acted, we know the German general staff was prepared to remove Hitler and we would have saved about 50 million lives.

ABERNETHY: Professor Casey, where does modern technology leave the just war tradition? I mean, here we have weapons of mass destruction that can be delivered by missiles or perhaps by a terrorist suitcase. Doesn’t that kind of change the criteria for what are the conditions in which you might go to war?

Prof. CASEY: It certainly puts pressure on them just like [the] advent of [the] nuclear age did. But look at the alternative. If mere possession of weapons of mass destruction is just cause for invading another country, there are dozens of countries today that can be invaded by dozens of other countries. So the notion of nonintervention is your beginning point, is really a safe, sometimes lamentable position to be in, but there are reasons [for] preserving that.

Dr. LAND: And I would say that there is no other country that has the capability of weapons of mass destruction that has shown the willingness to use them against innocent civilians. Saddam Hussein has already gassed Iranian soldiers and his own people. He’s used biochemical weapons. And I think no one doubts that he would use nuclear weapons if he has them. 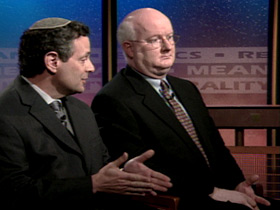 Prof. CASEY: But where do you draw the threshold? You look at nations like China, you look at Russia, you look at Libya, you look at Iran, you look at North Korea. If we normalize going in preemptively against countries that possess these very weapons, we’re looking at World War III in a number of theaters.

Rabbi MOLINE: You may be disingenuous when you suggest that this would normalize that act by naming all those counties that possess those weapons. You overlook the fact that we’ve called for peace and frequently found responsive voices. We haven’t felt the need to consider this kind of an act. It’s murder when you go in to do something for the sake of your principles or your value. It’s self-defense when there is a clear and present danger. And I think morally, that’s the case we have to consider right now, and it’s agonizing.

ABERNETHY: And Richard Land, you feel there’s a clear and present danger here?

Dr. LAND: I do, and I agree with what the rabbi just said. First of all, the laws of proportionality would say that if you attack a country that has weapons of mass destruction already operational, you have to be very, very careful because it can lead to huge amounts of deaths. That’s why we need to act against Saddam Hussein before he has more operational and more damaging weapons of mass destruction.

ABERNETHY: And you feel that argument is one you can root in Scripture, in, for instance, in Jesus’ life?

Dr. LAND: I do. I think when Dr. Winkler said that he couldn’t imagine Jesus supporting this, I think he needs to look at the complete scriptural presentation of Jesus. Jesus said in Matthew, chapter 10, verse 34: “I come not to bring peace but a sword.”

Prof. CASEY: The difficulty is if Prime Minister Vajpayee in India hears this conversation and accepts it, he has just cause for going in and preemptively striking Pakistan. That is World War III.

ABERNETHY: Our time is up. Thanks to Professor Shaun Casey of Wesley Seminary, Dr. Richard Land of the Southern Baptist Convention, and Rabbi Jack Moline of Congregation Agudas Achim in Alexandria, Virginia.

First Things: "Jihad and Just War" by James Turner Johnson, June/July 2002 The Nation: "Religion and the War against Evil" by Harvey Cox, December 24, 2001