BOB ABERNETHY, anchor: In the American Muslim community, there is concern that a U.S. strike against Iraq could ignite new anti-Islamic sentiment. In the wake of 9/11, American Muslims say they have experienced increased discrimination and suspicion — and violations of their civil liberties. Many are also frustrated that their religion is often represented as extremist, even violent. Kim Lawton has our special report on how the events of 9/11 have posed continuing challenges for American Muslims as they work to build their community here.

KIM LAWTON: In New York’s mid-Hudson Valley, about 70 miles north of Manhattan, Muslims are being called to prayer. Aziz Ahsan and his family are among those heeding the call. Ahsan is a lawyer who moved to the U.S. from Pakistan more than 20 years ago. Now he’s an American… an American who was deeply and personally drawn into the events of 9/11.

Ahsan was at the World Trade Center on that fateful morning. He stopped at the post office there to buy sheets of the special new Muslim stamp that had been issued earlier that month. A short time after he left, the planes hit, and he got caught in the deluge of debris. 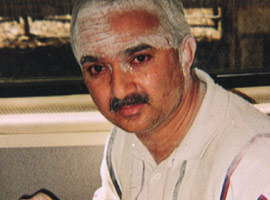 AZIZ AHSAN: I was panicking and I just wanted to touch my children and my wife and sort of die. It was that close. And it was like every breath was precious at that time.

LAWTON: Hours later, he was finally able to make his way home.

Mr. AHSAN: As a Muslim, I believed that it was God that saved me.

LAWTON: The debris burned his cornea, and some particles remain imbedded in his inner eyelid. Ahsan keeps his clothes from that day in a paper bag in his garage.

Mr. AHSAN: You can see the shirt I was wearing. It’s kind of full of debris and dirt. I just don’t feel like washing them. I’m not going to wear them because they are 9/11 memories for me. And so I may just keep it and maybe somebody will benefit by putting it in a museum or someplace where they might appreciate that Muslims were affected by 9/11 as every other person.

LAWTON: He says the impact of that day has only grown stronger.

Mr. AHSAN: 9/11 was a turning point for not only me, but for the whole Muslim community. 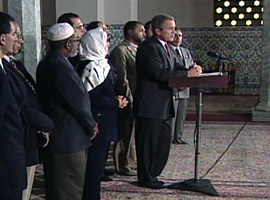 LAWTON: Muslims across the nation agree 9/11 has been a turning point that created numerous new challenges as they continue to define their community in America. Perhaps the greatest challenge has been differentiating themselves from terrorists, in the eyes of the government and the public.

Over the past year, President Bush has reiterated that Islam was not to blame for the September 11 attacks. He repeated those assertions again this past week.

President GEORGE W. BUSH: We must remember that our enemy is a radical network of terrorists, not a religion.

LAWTON: But the Bush administration believes a tiny minority of American Muslims may support terrorism. Authorities have detained hundreds of Muslims, raided Islamic institutions, and increased surveillance of mosques.

TALIB ABDUL KARIM (Muslim Legal Defense Fund): Anytime the United States government starts to target our Muslim organizations, they can do so if they don’t fear the retaliation and backlash of hundreds of thousands of Muslims in this country who will speak out.

LAWTON: There is strong internal debate about how to do that.

Professor AZIZAH AL-HIBRI (Law Professor): It’s easy to be angry. It’s more difficult to be wise about it. But to focus on confrontation and not on conflict resolution is to misunderstand the basic philosophy of Islam. 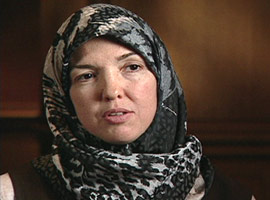 Professor INGRID MATTSON (Hartford Seminary): It’s is a very difficult issue right now, and there’s a lot of discussion about the strategy for standing up for civil liberties, for the rights of Muslims in this country, without appearing to be sympathetic to violent people.

LAWTON: Another challenge has been addressing what many see as increasingly negative public perceptions about their faith and their community. Aziz Ahsan says nearly every American Muslim has faced this — including his 14-year-old son Shahzad, who has been insulted and called names, among them Osama.

SHAHZAD AHSAN: It hit me strongly because I saw my father getting out of our car, covered head to toe in soot and the World Trade Center. I was looking at my father almost dead, and I couldn’t understand why people would hate Muslims when they were victims of the attack as well.

LAWTON: Many Muslims say they’ve been unnerved by statements by some prominent religious leaders, including evangelist Franklin Graham, son of Billy Graham, who has generated controversy for saying the Qur’an justifies violence against non-Muslims.

FRANKLIN GRAHAM (from RELIGION & ETHICS NEWSWEEKLY interview): The Qur’an does teach it. It is there. You can read it for yourself.

Professor MATTSON: If you compare statements about what Islam is and what Muslims believe, you’ll find they are almost identical. And I reject both interpretations, both those, you know, the non-Muslims who are saying that Islam justifies violence against Christians and Jews and the Muslims who are saying it. 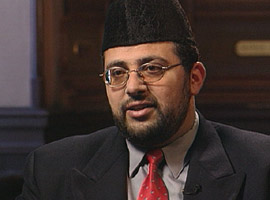 Imam YAHYA HENDI (Georgetown University): Muslims in America are very frustrated with the way Islam has been portrayed. Muslims do not see Islam as a religion of violence. On the contrary, Muslims believe Islam is a religion of peace that teaches forgiveness and love.

LAWTON: Over the past year, Imam Yahya Hendi has visited numerous churches to explain his faith and build bridges.

Imam HENDI (Sermon): Let us join hands, let us join efforts, and let us work together as sailors led by the three captains, Moses, Jesus Christ, and Muhammad.

Imam HENDI: We are misunderstood, and therefore, the challenge has been how we can reintroduce ourselves in a language that is familiar with our fellow American neighbors.

LAWTON: But Hendi and other leaders acknowledge that American Muslims need to do more to condemn extremist interpretations of their faith.

Imam HENDI: What I would challenge on the [television] screen here [is for] moderate Muslims to speak up more than ever before. Even if they have been, we need to be more active. We need to educate our fellow neighbors about the truth of Islam, but we also need to educate about Islam our fellow Muslims, who might not understand what the religion is all about. 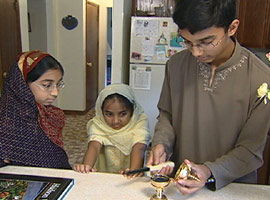 Professor MATTSON: Muslims have really needed to think about what they believe, what’s the [essence] of their beliefs. Are they willing to stand up for them in the face of both Muslims who use violence in the name of Islam, and on the other hand, other people who are distorting our religion for their own reasons?

LAWTON: At a recent meeting of the American Muslim Council, law professor Azizah al-Hibri urged the community to focus less on foreign affairs and more on being good neighbors and wise, well-informed leaders.

Professor AL-HIBRI: We have not been good Muslims, let’s face it. And if we don’t start with ourselves and if we just blame the others, we’re not going to go anywhere.

KAREN ARMSTRONG (Author, ISLAM, in speech): The Prophet was always going forward. This is not a time, as you know, to retreat in fear. It’s a time to take the opportunity of a tragedy, of a struggle, of a horror, to grow.

LAWTON: In upstate New York, Aziz Ahsan says since 9/11, he’s felt a renewed sense of responsibility to his local Muslim community. He’s been speaking about Islam and writing editorials for the local paper.

He says the American Muslim community must become firmly rooted here — for its own sake and, more importantly, for the sake of the next generation.

LAWTON: Ahsan may still carry traces of the World Trade Center in his eyes, but he says all American Muslims carry a piece of 9/11 in their hearts. He just wishes other Americans would believe it.