BOB ABERNETHY, anchor: As U.S. officials debate who should run Iraq after the war, one reality is the division between the two main branches of Islam, Shi'ite and Sunni. Unlike the situations in most Muslim countries, the majority of Muslims in Iraq, 60 percent are Shi'ites.

Dr. Phebe Marr, a historian and expert on Iraq, predicted that Iraqis will be impatient with any occupation and will want to govern themselves. Later, she told me that would mean a strong role for the Shiites.

Dr. PHEBE MARR (Historian and Author, THE MODERN HISTORY OF IRAQ): The word "shia" means partisan or party. That tells you that this was originally a political rather than a religious split. "Sunni" comes from the word "suna" -- the custom and practice of the Prophet, which is encoded in Islamic law. The Sunnis follow the law. The Shia follow the leader.

The split originated in a problem of succession after the death of the Prophet Muhammad. Ali, his cousin and son-in-law, was passed over for the succession and thought he should have had it. 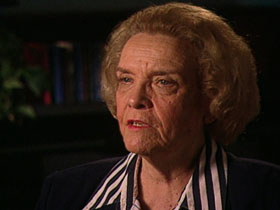 ABERNETHY: So it's not primarily a religious split in Iraq?

Dr. MARR: No, it is not a religious split in Iraq. I will say that definitively. The two communities get along fairly well.

There's a certain amount of intermarriage. But throughout much of their modern history it's been Sunnis who have governed. They have had the dominant positions in the state.

ABERNETHY: So what do those differences imply about a future government in Iraq?

Dr. MARR: Well that's the $64,000 question. Nobody can answer that. But I can certainly tell you that this issue I've sketched out, what percentage of Shia, what role the Shia play in government, is going to be a very dominant one. Iraq is a very secular country. It's one of the most secular countries in the Middle East.

A future Iraq should be a secular state which separates religion and politics. That is going to be absolutely essential in Iraq because the population is so evenly divided between Sunni and Shia. If you try to impose one or the other on the other community it's going to be unstable. So there should be freedom of religion.

ABERNETHY: And that is possible?

As U.S. officials debate who should run Iraq after the war, one reality is the division between the two main branches of Islam, Shi’ite and Sunni. Dr. Phebe Marr, a historian and expert on Iraq, joined us to discuss the future of the conflict.