BOB ABERNETHY, anchor: Anti-Muslim tensions continue to increase in Western Europe. In Germany, police raided two Islamic centers and mosques looking for signs of terrorism or hate speech. No arrests were made. In France, President Jacques Chirac defended his government’s ban on head scarves in schools, saying integration is not working well.

For decades, Muslims from the Middle East and North Africa have emigrated to Europe to find work. But jobs for the low-skilled are now hard to find, and 9/11 and the Spanish bombings last March have heightened anti-Muslim fears. We have a report today from Saul Gonzalez, in Holland. 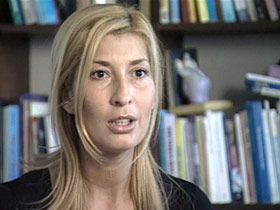 SAUL GONZALEZ: The Netherlands has long been a country synonymous with peace and prosperity, with its 16 million citizens enjoying one of the highest standards of living in the world. It’s also a nation known for its liberal social values. Here prostitution is open and legal, as is the use of some drugs like marijuana, which can be bought as easily as a cup of coffee.

However, like other European nations’, Holland’s reputation for tolerance is being tested as the country grapples with how to welcome and integrate its growing immigrant Muslim population — a community of 900,000 people who are increasingly vocal in demanding equality in Dutch society.

SAMIRA ABBOS (Writer and Social Commentator): I don’t want to be tolerated in this country. I have lived here for 32 years. I’m a citizen of Holland. I want to be accepted.

GONZALEZ: Samira Abbos is a writer and social commentator of Moroccan birth. She says many of Holland’s Muslims, especially the young, are trying to find ways to reconcile their identities as both Muslims and Europeans. 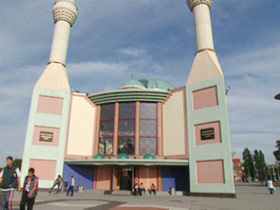 GONZALEZ: As in much of Europe, Islam’s presence in Holland is increasingly visible, from the growing numbers of women who wear scarves and even full veils on the street to the construction of opulent new mosques.

As Holland and other European countries struggle to assimilate their growing Muslim populations, many fear a gulf is growing on this continent between Muslims and non-Muslims, a gulf characterized by mutual suspicion and hostility.

BARRY MADLENER (Rotterdam City Councilman): If you say, “I reject the western lifestyle and I don’t want to fit in your way,” I say, “Keep away!”

GONZALEZ: Barry Madlener is a municipal councilman in the Dutch port city of Rotterdam. It’s a metropolis where nearly 50 percent of all residents are foreign-born, with most of them from Muslim countries. Echoing the views of many Europeans, Madlener favors tighter immigration laws and argues that too many Muslims living in Europe are unwilling to accept European cultural values, such as equality for women and gays. 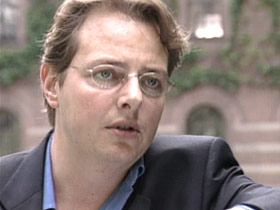 GONZALEZ: Madlener’s views are not unique. A recent national poll found that more than a third of Dutch citizens feel threatened by Muslims. Fears of terrorism also contribute to Europeans’ ambivalence toward the continent’s more than 12 million Muslims, especially in the wake of the Madrid train bombings of last March. Those attacks, planned and carried out by Islamic militants, killed nearly 200 people.

Many young European Muslims, like Dutch-Moroccan kickboxer Fekre Tayardi, say they’re saddened that Islam has become associated with bloodshed and fanaticism in the minds of some Europeans. Tayardi says the only people he wants to fight are in the ring.

GONZALEZ: Abbos feels that the actions of a radical few make it easier for Europeans to demonize all Muslims.

Ms. ABBOS: It can make you crazy because you don’t know me, but you are afraid of me! And we live in the same country. For me, that is a very big problem. 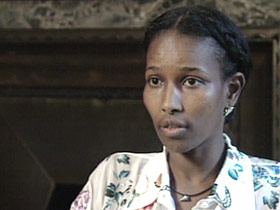 GONZALEZ: However, this woman — one of the most controversial figures in Holland — says European society should fear some in the Muslim community. She is Ayaan Hirsi Ali, a Somali-born Dutch legislator and former Muslim herself, who says Europe is increasingly threatened by Islamic fundamentalist beliefs imported from the Middle East — beliefs that are appealing to many poor and alienated Muslim young people.

GONZALEZ: Hirsi Ali says she is especially concerned about what growing Islamic fundamentalism in Europe means for the progress of Muslim women on the continent.

Ms. HIRSI ALI: So fathers forbid their daughters to go to school. They forbid them to have friends. They forbid them to mix with the native Dutch people. After a certain age they are forced or persuaded into a marriage. And when society discusses this, the Left would say, “It is their culture, we are supposed to respect it.” But what you see, these are human rights abuses. 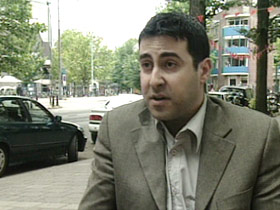 GONZALEZ: Many European Muslims complain that it’s their rights and freedoms that are in jeopardy.

DYAB ABOU JAHJAH (President, Arab European League): When a Muslim declares openly that he is a Muslim and is outspoken about that and wants to participate in politics and public life, out of his own beliefs, which is what everybody does, that Muslim is considered an extremist.

GONZALEZ: Lebanese-born Dyab Abou Jahjah is the president of the Arab European League, a controversial Muslim civil rights group. Jahjah argues that the plight of Muslims in 21st-century Europe is no better than that of African Americans during the days of segregation.

Mr. JAHJAH: I think it is even more oppressive. They are unemployed. They have no education — the level of school dropouts is phenomenal. They have no housing. They have no practical political rights.

GONZALEZ: Jahjah criticizes recent laws passed in Europe, such as a ban on head scarves in French schools and a requirement in Holland that Muslim clerics use the Dutch language in religious services. To Jahjah, such laws are repugnant examples of forced cultural assimilation that send a clear message to Muslims. 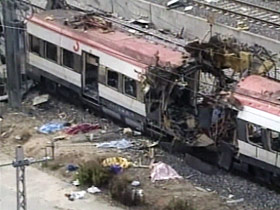 GONZALEZ: As he lectures about the oppression of Muslims in Europe, however, Jahjah himself is attacked as a dangerous demagogue by his critics. Those critics often cite Jahjah’s qualified condemnations of past terrorist attacks, such as the Madrid bombings.

Mr. JAHJAH: I said clearly that I condemn the bombings. And then they ask me, “Is it absurd violence?” And I said it is not absurd, there is a political agenda behind it. If you ask me why they did it, I can tell you why they did it. So I am not going to come into a politically correct discourse. I know why people attacked Madrid. I say it’s stupid of them. They should have taken other targets. People are shocked! I say they could have attacked positions of the Spanish army. Any military target is a fair target. Any military target of a country occupying an Arab land is a fair target for an Arab.

GONZALEZ: Hirsi Ali’s criticisms of Islam have earned her numerous death threats. Wherever she goes, she’s now accompanied by bodyguards. But Hirsi Ali says she has a responsibility to speak out against religious extremism, no matter what the danger.

Ms. HIRSI ALI: I think it is worth the risks. But I think that I can — living in the Netherlands, a very rich western country, which can afford to give me bodyguards all the time — can afford to do it. If I were to do the same thing now in Somalia or any country with an Islamic majority, I would have been dead a long time ago. I would not even have tried it.

GONZALEZ: As Islam’s presence grows, what Western Europe is going through now should be familiar to the U.S., where dealing with newcomers has always been a challenge.