BOB ABERNETHY, anchor: Now, a special report on gay marriage and the black church. The national debate over same-sex marriage has posed big challenges for many African-American clergy. Traditionally, black churches have stressed an interpretation of Scripture that opposes homosexuality. But those congregations also have long been at the forefront in fighting for civil rights. What happens when those two values seem to collide? Kim Lawton reports. 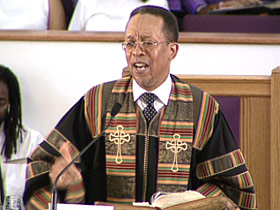 KIM LAWTON: Sunday mornings take a traditional tone at Covenant Baptist Church in Washington, DC, with long-standing rhythms and rituals familiar to black churches across the country. But on this Sunday, Pastor Dennis Wiley is preaching a sermon that is anything but traditional. He’s giving a rousing affirmation of gay marriage.

Reverend DENNIS WILEY (Pastor, Covenant Baptist Church) (During Sermon): A lot of people will say God made Adam and Eve, not Adam and Steve. Have you ever heard that? If God didn’t make Steve, who made Steve? Somebody had to make Steve.

Why would God create someone of that orientation and then not allow them to have the same kind of opportunity for love, for relationships, for a healthy life as heterosexuals enjoy?

LAWTON: Wiley acknowledges his is a minority view among African-American clergy, who are more likely to agree with the Reverend Cheryl Sanders. She pastors the Third Street Church of God across town. 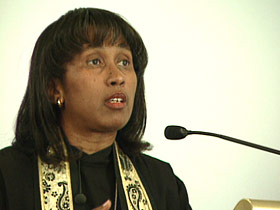 Reverend CHERYL SANDERS (Pastor, Third Street Church of God) (During Sermon): We do not have any place in the Scripture or in our tradition that we would consecrate, or affirm or acknowledge, marriage between two persons of the same sex.

Homosexual practice in my understanding of Scripture is a sin. And it’s not the only sin, and it may not be the worst sin, but it’s certainly a sin.

LAWTON: Within the African-American community, the national debate over gay marriage is pitting two deeply held values against each other. Historically, black churches have interpreted Scripture as condemning homosexuality. But given their own history, African-American congregations have also traditionally empathized with oppressed minorities.

Dr. ROBERT FRANKLIN (Professor of Social Ethics, Emory University): Black churches have been struggling with both their natural empathy and their reading of Scripture. And this has prompted an extraordinary debate about whether or not the gay rights movement is a civil rights struggle, a human rights struggle; whether it is something that the church can support and embrace.

LAWTON: It’s a debate that touches Alvin Williams and Nigel Simon personally. The two met at a discussion group for black gay men and have been together for seven years. They’ve adopted a son, Kiran, who’s six. Both men say they grew up hearing messages of condemnation in black churches. 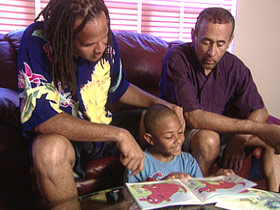 AL WILLIAMS (Congregation Member, Covenant Baptist Church): Actually, it started me to do a lot of praying about changing who I was. I would pray to God, “Take these feelings away from me. I don’t want to be this way.”

LAWTON: Today, they attend Covenant Baptist Church, where Williams sings in the choir. He says he has found great spiritual strength being in a congregation where he is affirmed.

Mr. WILLIAMS: It was like, “Okay, news flash: maybe you’re not the terrible person everybody is trying to portray you to be. God loves you, just the way you are. He created you that way. He loves you.”

LAWTON: Pastor Wiley says black churches condemn homosexuality from the pulpit, while all too often refusing to acknowledge the gays in their own congregations. 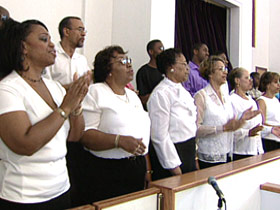 Rev. WILEY: We will use these persons in our choirs; we will ask them to play our organs, our pianos, and our instruments. We will utilize their gifts and talents to the max, but we seem to be trying to adopt a policy like the military: don’t ask, don’t tell. I don’t think that is really consistent with the gospel of Jesus Christ.

LAWTON: But many — perhaps most — African-American pastors say their position is consistent with the Bible. They believe the issue comes down to a straightforward reading of Old and New Testament passages that condemn homosexual practice, as well as the teaching that marriage is a sacred institution between a man and a woman.

Rev. SANDERS: There’s some very strict prohibitions in some biblical texts, and you balance that against the affirmation, the positive statements that Jesus makes about marriage, and that becomes the foundation of our view of marriage in general, and also of our view of same-sex marriage in particular.

LAWTON: In addition to being a pastor, Cheryl Sanders teaches Christian ethics at Howard University School of Divinity. She says this is a difficult issue for her.

Rev. SANDERS: My obligation is to tell the truth as best as I understand it and can proclaim it. But you recognize that the truth may be difficult for people to accept or to embrace. I’m also part of a tradition that believes that sinners come to salvation through the proclamation of the Scripture. So if we have a concept of sin and sinner, at some point, we have to be truthful about that to give people the opportunity to be transformed and changed.

Rev. WILEY: If one wants to understand the Bible, we must not just selectively take a few passages of Scripture that seem to support our own preconceived notions and try to base our argument on that. I think we need to look at the whole Bible, and we need to look at what I could call the character of God. 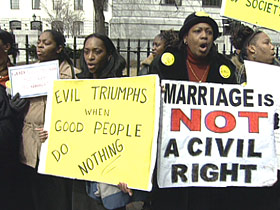 LAWTON: The theological debate has taken on new political significance as battles over gay marriage heat up at the state and federal levels. Activists on both sides of the issue see the black church as an important potential ally.

Dr. FRANKLIN: I think a lot of groups from the conservative evangelical camp to very liberal pro-same-sex marriage camps are both trying to enlist the moral authority of the black church on their side.

LAWTON: Black churches led the march for civil rights in the ’50s and ’60s, and gay rights advocates see this battle as a logical extension of the movement.

Rev. WILEY: To me, it’s a bit hypocritical for us — as African Americans who have been the victims of so much hatred, racism, bias, prejudice — for us then to turn around and to deny the opportunity for equal rights to any other oppressed community.

LAWTON: Nigel Simon and Al Williams had their union blessed in a religious ceremony six years ago. They say if marriage had legal status in their home state of Maryland, they would seek it, primarily for family benefits.

Mr. SIMON: Right now, when we adopt children, we have to do two separate processes to get it done. It’s separate, but unequal. 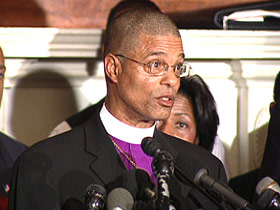 LAWTON: But many African Americans reject comparisons between the civil rights movement and advocacy for gay marriage.

Bishop GILBERT THOMPSON (Black Ministerial Alliance of Boston): It offends me that the proponents of same-sex marriage are trying to incorporate discrimination language in their argument. As an African American, I know something about discrimination. I was born black! It was not a decision on my part.

Dr. FRANKLIN: Black churches are feeling the pressure of having lost so much ground in building strong marriages and families that many feel they have to draw the line here. I think many feel overwhelmed by this burden to build stronger families, and so they are impatient with the demand to acknowledge equal rights to homosexuals. 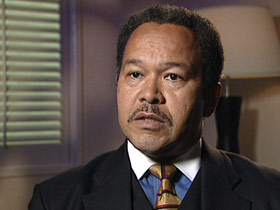 LAWTON: Nigel and Al are trying to adopt more children. They say they’re building up the black family, not tearing it down.

Mr. SIMON: These children don’t have anyone to love them. They don’t have a home. And we’re saying, “We’re giving them a home.”

Mr. WILLIAMS: How can we destroy a family unit when half of the marriages that are in the heterosexual community end in divorce in less than 10 years? So who are you kidding? We’re not the enemy here.

Bishop THOMPSON: The massive evidence from social science research shows unique benefits to society and especially to children of a wedded mother and father.

LAWTON: Political coalitions are already forming over the issue. Republican congressional leaders have held press conferences with prominent Democratic black clergy who support a gay marriage ban. However, most African Americans are Democrats who tend to vote more on economic issues than social ones. Still, activists on both sides will be mobilizing black churches to be a force on Election Day. At least 11 states are likely to have anti-gay marriage initiatives on the ballot in November.