BOB ABERNETHY, anchor: For more than a year now, we’ve been reporting on the deep divisions over homosexuality in the worldwide Anglican Communion and its American branch, the Episcopal Church USA. At the center of the crisis is Frank Griswold, presiding bishop of the U.S. Episcopal Church. The presiding bishop can’t make or repeal Church positions. But he holds great moral authority in implementing policies approved at the Church’s General Convention – even policies that threaten to tear the church apart. Kim Lawton talked with Bishop Griswold.

KIM LAWTON: As presiding bishop, Frank Griswold is lead pastor and chief administrator of the 2.3 million-member Episcopal Church USA. It’s a prestigious job, and these days, he admits, a challenging one.

Bishop FRANK GRISWOLD (Presiding Bishop, Episcopal Church USA): It has not been easy to be the presiding bishop in this season. 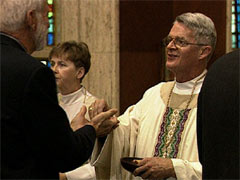 LAWTON: Griswold is at the center of what many believe is the biggest crisis the Episcopal Church has faced in its more than 200-year history – a crisis that threatens the future not only of the U.S. Church, but also of the entire worldwide Anglican Communion. It was under Griswold’s watch that the U.S. Church approved the consecration of its first openly gay bishop, Gene Robinson of New Hampshire, and permitted the blessing of same-sex unions.

Those actions ignited spiraling controversy, not just over homosexuality, but also about the interpretation of Scripture, the nature of church authority, and the organization of the Anglican Communion. In the midst of it all, Griswold says his responsibility is to push for unity and reconciliation.

Bishop GRISWOLD: My basic task is to keep as many people at the table as possible, and to remind everyone that though they have their own particular point of view, there are others who have another point of view, and they are equally members of the church, loved by God, members of Christ’s risen body, and therefore must be taken with full seriousness. And it’s in the tension, often, that the truth, whatever it may be, gets more fully revealed.

LAWTON: But statements like that have earned Griswold sharp criticism from conservatives who believe the U.S. Church has violated the Bible’s condemnations of homosexuality and violated traditional church teachings. 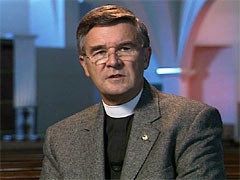 Canon DAVID ANDERSON (American Anglican Council): The Church starts with truth and finds its unity grounded on that truth, and in the Episcopal Church, according to the presiding bishop, there are pluriform truths: your truth, my truth, his truth. And that is no basis for trying to find unity.

LAWTON: Griswold presided over the consecration of Bishop Robinson and has been open about his own view that there can be differing interpretations of the Scripture. But he says he tries to minister to all, even those who disagree with him.

Bishop GRISWOLD: Certainly as the presiding bishop I see myself as belonging to everyone even though I have my own points of view. I care as much for people who are distressed as people who think the actions are inspired by the Spirit.

LAWTON: But Canon David Anderson, president of the conservative American Anglican Council, says Bishop Griswold has lost the trust of many in his flock.

Canon ANDERSON: We do acknowledge his leadership, but we acknowledge it to have been a fairly disastrous leadership so far, and we are hoping that there might be some changes in the course of direction of the Episcopal Church. We’d love for him to step down and recognize the damage he’s done.

LAWTON: Not all conservatives agree. One of Griswold’s closest friends is Bishop Charles Jenkins of Louisiana. Jenkins voted against the confirmation of Robinson but says he still trusts Griswold’s leadership. 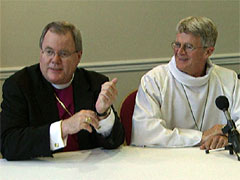 Bishop CHARLES JENKINS (Diocese of Louisiana): I’m willing to say that Frank Griswold is orthodox, and I am orthodox. We are both seeking God’s truth. Now he believes God’s truth is pointing in a different direction than I. But we are both willing to wait upon God to show us that.

LAWTON: Griswold says he tries not to take the criticisms personally.

Bishop GRISWOLD: I must say I am well served by a wonderful spiritual director who once said to me, “What other people say about you is none of your business.” And that was very helpful. And I realize that a lot of the anger and upset, and indeed, some of the elation as well that gets focused on me isn’t so much about me as myself as me as symbol.

LAWTON: Griswold says he finds spiritual strength and resolve through regular prayer and Scripture reading. He begins and ends each day with cyclical readings from Old and New Testament passages and the Psalms.

Bishop GRISWOLD: As I read the Psalms each day in morning and evening prayer, many of the Psalms are about people in a situation of suffering and feeling isolated and alone, and nevertheless, “I know you’re with me, God.” I mean, those Psalms take on an immediacy that they didn’t have before. 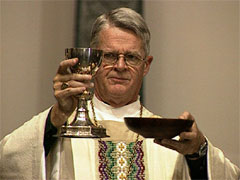 Bishop JENKINS: He has taken some very hard punches. He has been betrayed by friends. And he keeps showing up, and he keeps saying his prayers, and he keeps, I think, exhibiting the graciousness that is characteristic of someone who knows Jesus.

LAWTON: The near future is likely to be just as contentious. Over the next several months, church leaders in the U.S. and around the world will be discussing the recommendations of the special commission appointed to help the Anglican Communion avoid schism. Conservatives say much is at stake.

Bishop ROBERT DUNCAN (Diocese of Pittsburgh, at Windsor Press Conference): The Episcopal Church is now faced with serious and difficult choices. They can follow the lead of Bishop Griswold, which will ultimately lead to the demise of the Episcopal Church, or they can choose to embrace the core covenant recommended by the commission: reject false doctrine and preserve faithful unity.

LAWTON: Griswold is proud of what the Episcopal Church has accomplished on many fronts since he was installed as presiding bishop in 1998. At this point in his nine-year term, he says he’s frustrated by how much attention is taken up by gay issues.

Bishop GRISWOLD: I find the endless fixation on sexuality, and more specifically homosexuality, a distraction from other areas that, quite frankly, are matters of life and death. When I retire as presiding bishop, I hope that I’m known for something other than this issue.

LAWTON: But the issue will be dominating Griswold’s agenda in the beginning of the coming year. The U.S. House of Bishops will be meeting about it in January. And the leaders of all the world’s Anglican churches gather in February.