BOB ABERNETHY, anchor: Across the political and theological spectrums, religious conservatives, moderates, and liberals all have their own hopes for the president’s second term. Some conservatives say it’s payback time for their support in the election. Others say, “Don’t forget the poor.”

Kim Lawton has our story today on America’s religious agendas. 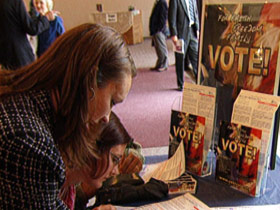 KIM LAWTON: In his State of the Union Address, President Bush outlined his plans and goals for the future. The next morning, at the National Prayer Breakfast, the president acknowledged the importance of praying for wisdom in guiding the country.

LAWTON: Conservative evangelicals and Catholics are optimistic this bodes well for their policy priorities. Many in those communities worked hard for Bush’s reelection and are now confident he will move ahead on the issues they care about most.

Dr. RICHARD LAND (President, Southern Baptist Convention’s Ethics and Religious Liberty Commission): The expectations are very high among my constituency that this president is going to do his best to fulfill his promises. We believe this president to be a man who keeps his word. And he’s a man who not only understands our issues, he shares our worldview.

LAWTON: Democratic activist John Podesta is part of a growing movement of faith-based moderates and liberals who pledge to counter many of the positions religious conservatives are pushing for. 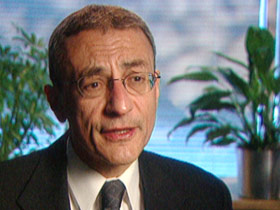 JOHN PODESTA (President and CEO, Center for American Progress): They formed, certainly, the backbone of the people who were out on the streets trying to get the president reelected. And they’re asking for a lot, but I think they’re asking for things that the American people really don’t want. I think they have a very cramped view, I think, of what the critical issues in front of the country are.

Dr. LAND: My community, Southern Baptists and other evangelicals, want the president to strongly defend traditional marriage by giving presidential support to a marriage protection amendment. We want the president to continue to strongly push a pro-life agenda, and to support pro-life legislation that will be introduced in the House and the Senate, and to continue to promote freedom and democracy.

LAWTON: Their confidence may be high, but some evangelical leaders are cautioning against a “payback time” mentality. 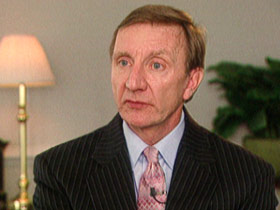 Reverend RICHARD CIZIK (Vice President, Governmental Affairs, National Association of Evangelicals): Our values are the president’s values, but we simply can’t run roughshod all over Washington. Evangelicals, yes, we have a right to expect a response from Congress and the White House, but we also have to be, yes, as Christians, magnanimous.

LAWTON: There are still many political realities in Washington. At last month’s March for Life, Bush promised to continue his support for what he called a “culture of life,” although he offered no specifics. He repeated that during his State of the Union Address, although he never mentioned the word “abortion.” Evangelical leaders are urging new restrictions on abortion, but they concede those restrictions are modest ones.

Rev. CIZIK: They’re admittedly not overturning ROE V. WADE. They’re addressing it at the margins. But that’s what we expect.

LAWTON: There are also political uncertainties surrounding a constitutional amendment to define marriage as between one man and one woman — an issue that galvanized many conservative voters in November.

During the State of the Union speech, the president reaffirmed his support for the amendment. Still, some conservatives are dismayed that Bush is focusing so much more on Social Security reform. 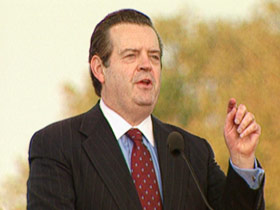 Dr. LAND: Among the social conservatives there’s not the kind of consensus for Social Security reform that you have, for instance, on protecting marriage between a man and a woman, or on the pro-life issue.

LAWTON: Senate leaders have not included the marriage amendment among their top legislative priorities, and conservatives say it will take presidential pressure to help get the two-thirds majority needed to pass it.

Dr. LAND: We do not want any wavering on an amendment to the Constitution to protect marriage from a runaway imperial judiciary in the United States.

LAWTON: While much of the rhetoric focuses on abortion and gay marriage, some leaders say there is much more on the evangelical agenda.

Rev. CIZIK: We want action, for example, to address religious liberty, democracy-building overseas, and religious liberty on the faith-based initiative here in the States — broadening that at the state and local level. We would like action, yes, on poverty issues and on the environment. So we have a broad agenda. And don’t typify us all simply by the term which is for us at times derogatory: “religious Right.” We are mainstream America. 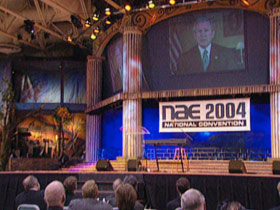 LAWTON: But Cizik ultimately believes that much of the future agenda hinges on success in Iraq.

Rev. CIZIK: The biggest issue, even for evangelicals, is Iraq. And if the elections, if the democracy-building project — as we call it — in Iraq fails, it may well be that this president’s legacy fails.

LAWTON: Other religious groups also say they have a broad range of priorities for the second term. The U.S. Catholic bishops, for example, have on their list opposition to gay marriage, abortion, and embryonic stem cell research, but they also include support for a host of social justice issues.

John Podesta, a Catholic, is trying to mobilize religious progressives through the Center for American Progress.

LAWTON: Some of the biggest concerns are over Social Security reform, which many religious moderates and liberals fear will dismantle the social safety net. Rabbi David Saperstein of the Religious Action Center of Reform Judaism. 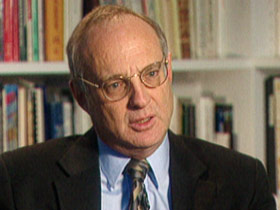 Rabbi DAVID SAPERSTEIN (Director, Religious Action Center of Reform Judaism): The moral test of any civilized nation is what it does for the weak, the least among us, to use the Christian terminology — the widow and the orphan, the child and the elderly. If our policies do not create zones of protection for those people, we have failed to live up to our biblical mandates.

Mr. PODESTA: Where [Bush is] going on health care and Social Security, on taxation, putting all the benefits to the very wealthiest Americans and denying essential services to the poorest Americans, I think we’re going to have to fight with him — quite a bit.

LAWTON: Big fights are expected over judicial nominees and, in particular, any new appointments to the U.S. Supreme Court. Social conservatives see this as a vital issue that will affect all their other priorities. They will strongly oppose what they call “activist judges who legislate from the bench.”

Rev. LAND: We want justices like Clarence Thomas and justices like Antonin Scalia. We want judges like those justices, and the president has said that’s what he wants. And so, it would be a grave disappointment to me if we were to get people like David Souter.

LAWTON: Religious liberals are gearing up to strongly oppose any scaling back of rights granted by recent court decisions. 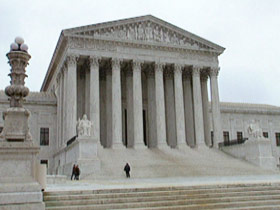 Rabbi SAPERSTEIN: What would disappoint me most is to unravel the great achievements of the 20th century, to reshape the federal courts in a way that abandons the extraordinary transformative expansion of fundamental rights that made life so much better for women and for all minorities in America, including religious minorities, by their assertion of a strong wall that keeps government out of religion.

LAWTON: Despite their concerns in many areas, faith-based moderates and liberals do see areas for common cause with the president. Rabbi Saperstein says he is particularly optimistic about the Middle East peace process in the wake of new Palestinian leadership.

Rabbi SAPERSTEIN: With the election of Abbas, it is really possible now that we could get the parties back to the table. This administration seems committed to investing financially, politically, to make that happen.

LAWTON: Saperstein and others in his movement are hoping to build on the president’s initiatives on human rights and international religious freedom, debt relief, foreign aid, and fighting the spread of HIV/AIDS.

Rabbi SAPERSTEIN: If he is open to listening to good ideas from across the political spectrum and seeking to heal the country of its divisions by governing from the center, on both domestic and foreign policy issues, there’s a lot that we can do together.

LAWTON: Religious groups say they’ll get an even clearer picture of the president’s agenda in his proposed budget for 2006. That’s scheduled to be presented to Congress this coming week. Faith-based lobbyists say they will examine the document closely to see what the administration will be focusing on in coming months.