BOB ABERNETHY, anchor (March 17, 2006): In Washington, renewed debate over access to the emergency contraception drug known as Plan B. Right now, the drug is available by prescription only. But the Food and Drug Administration has repeatedly delayed action on an FDA committee recommendation that Plan B should be made available over the counter. This week, two U.S. senators said they would block President Bush’s nominee as head of the FDA until the agency acts on the over-the-counter decision. Supporters of Plan B say it will reduce the number of unwanted pregnancies. Opponents say it can be a form of abortion when it blocks the implantation of a fertilized egg. Last year, Lucky Severson looked at the moral dimensions of prescribing emergency contraception.

LUCKY SEVERSON: A rally outside the Illinois State Capitol in Springfield. It’s against pharmacists who refuse to fill prescriptions for emergency contraceptives. 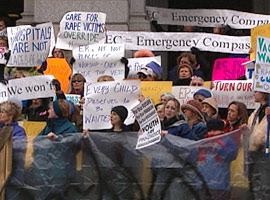 SEVERSON: Their complaint is not new, but the chorus is growing.

Another rally, this one outside the Colorado State Capitol, is to ensure that hospitals provide emergency contraceptives to rape victims.

UNIDENTIFIED SPEAKER (At Rally): This bill would require hospitals to provide rape victims with information about emergency contraception which can prevent pregnancy when taken after an assault. On April 5, Governor Owens vetoed this bill.

SEVERSON: Forty-six states have what are known as “conscience clauses” that allow health care workers the right to refuse to perform abortions. What concerns many women and men is that several states are now debating legislation that would expand these clauses to include not only abortion but emergency contraceptives as well. Four states have similar laws in place.

SEVERSON: Springfield pharmacist Quin Hostetler say his conscience would not allow him to fill an emergency contraceptive prescription. 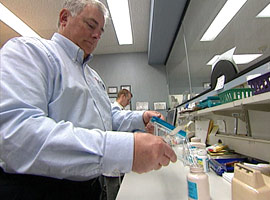 (To Mr. Hostetler): You personally would not sell emergency contraceptives?

Mr. HOSTETLER: Not the morning-after pills, no; that I have a problem with.

SEVERSON: But he says he would not refuse to refer the patient to another pharmacist.

Mr. HOSTETLER: I don’t believe in forcing my morals down somebody else’s throat, and in return I don’t expect them to do the same to me. If I can help somebody in this instance get the medication that they need, I have no problem doing that, although I would not dispense it myself.

SEVERSON: Luciana Fortune-Bass says she is a churchgoing mother of three who got a call in the middle of the night from a traumatized friend. The young woman couldn’t get the pharmacist, also a woman, to fill her emergency contraceptive prescription.

LUCIANA FORTUNE-BASS (Speaking at Rally): The only thing I knew was that she had sex, the condom broke, and she was at a pharmacy, and the pharmacist refused to fill her prescription or even return it. I was livid.

When I got there, this lady was ridiculing her about the morality and the fact that her soul was in jeopardy and she was going to hell and she was a baby killer. 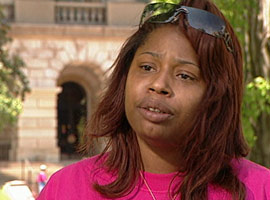 SEVERSON: The pharmacist eventually gave back the prescription, and Luciana drove her friend to a pharmacy 45 minutes away. Health experts say one of the problems with pharmacists refusing to fill prescriptions is that emergency contraceptives are most effective the sooner they are taken.

(To Ms. Fortune-Bass): What do you say to a pharmacist who says, “This is what I believe”?

MS. FORTUNE-BASS: I say, “You are entitled to your beliefs, but don’t infringe your beliefs on me.”

SEVERSON: It’s situations like that of Luciana’s friend that prompted Illinois Governor Blagojevich to issue an emergency order requiring pharmacists to fill prescriptions.

Governor ROD BLAGOJEVICH (At Press Conference): That if a woman goes to a pharmacist with a prescription for birth control, the pharmacy or the pharmacist is not allowed to discriminate or choose who he sells it to or who he doesn’t sell it to.

SEVERSON: The governor’s emergency decree may have endeared him to many people in Illinois, but not to religious organizations that oppose abortion.

PHILIP KARST (The Illinois Catholic Health Association): When a pharmacist, in their moral thinking, believes that this is an inappropriate activity, I have difficulty with the state or the governor just saying his moral judgment is more important than the moral judgment of some individual in the state. 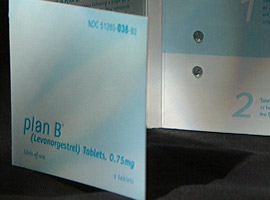 LEE JACOBS (Rape Victim Advocate): Just another layer of trauma on top of the trauma of being a victim of sexual violence. If it’s an issue of racism and sexism and classism, people in rural areas have that much more difficult of a time: people who don’t speak the English language, people who don’t have easy transportation to go to another pharmacy. It’s very real for people.

SEVERSON: Recently, 14 states introduced conscience clauses that would cover not only contraceptive services but allow pharmacists to refuse filling any prescription that offends their moral convictions. Opponents say it could open a Pandora’s box.

SEVERSON: Many pharmacists would like to have the same conscience clause as doctors, who are granted considerable latitude in what they can refuse. Emergency room physician Calvin Bell, a Catholic, would not perform an abortion, sterilization, or withdraw a feeding tube in cases like that of Terri Schiavo. His religious beliefs also affect the way he treats rape victims. 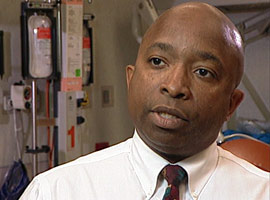 Dr. CALVIN BELL (Memorial Medical Center): This woman has at this point in time — she’s been victimized by someone, she’s been raped, she’s undergone a horrible trauma. But on the other hand, you’ve got a potential second life that is totally innocent, that’s done nothing wrong to anyone.

SEVERSON: Dr. Bell refuses to give rape victims emergency contraceptives, sometimes known as Plan B. In his opinion, life begins at fertilization, and the pill would prevent a fertilized egg from being implanted in the uterus.

Dr. BELL: Much of their action of these emergency “contraceptives” occurs actually after fertilization has occurred, so, in a sense, it’s an emergency abortifacient, is what we are talking about.

STEPHANI COX (Nurse Practitioner, Planned Parenthood, Springfield, IL): If the woman has a condom break, it comes off, she’s forgotten her pills, whatever the reason that she fears she may encounter an unplanned pregnancy, this gives her a second chance at preventing that pregnancy.

SEVERSON: Stephani Cox is a nurse practitioner with Planned Parenthood. She says Dr. Bell’s understanding of pregnancy goes against the accepted medical definition — that pregnancy begins only when the fertilized egg is implanted in the uterus. 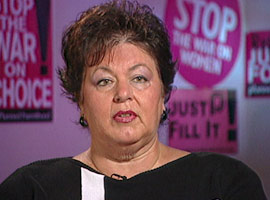 Ms. COX: If a woman should happen to have an early pregnancy that she is totally unaware of and take Plan B, it will do nothing. It does not cause a pregnancy. It does not harm the fetus. The pregnancy will continue as normal.

SEVERSON (To Dr. Bell): You would advocate to a rape victim that they continue the pregnancy?

Dr. BELL: If one of my daughters or my wife tragically suffered a rape, what would my advice be? My advice would be for them to carry the pregnancy to termination and give the baby up for adoption.

Ms. COX: Plan B, an emergency contraception, can prevent 22,000 pregnancies as a result of rape that end in an abortion. It can prevent 800,000 abortions a year. So, you know, even people who are antichoice should be on board with this. It’s preventing unplanned pregnancies, preventing the need for abortion.

SEVERSON: You don’t think that pharmacists ought to be given a right-of-conscience clause?

Ms. COX: My feeling is that once a pharmacist puts on his lab coat and steps into the pharmacy, it is his professional responsibility to fill every valid, legal prescription.

Mr. HOSTETLER: We have the same right that anybody else does. Just because we are a merchant, we should have the right to refuse to fill different prescriptions if we don’t feel morally correct with that.

SEVERSON: Several states are debating laws that would expand Quin Hostetler’s legal and moral discretion. And a few others are now considering legislation that would restrict them. Pressure on lawmakers will be intense — from both sides.

ABERNETHY (March 17, 2006): Since we produced that story, Wal-Mart has agreed to stock emergency contraceptives and will begin dispensing them on Monday (March 20, 2006). But Wal-Mart is also allowing their pharmacists to refuse to fill Plan B prescriptions if they want, so long as that doesn’t violate state law.