Read excerpts from The Mighty and the Almighty: Reflections on America, God, and World Affairs (HarperCollins, 2006): 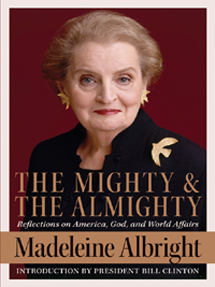 If I were secretary of state today, I would not seek to mediate disputes on the basis of religious principles any more than I would try to negotiate alone the more intricate details of a trade agreement or a pact on arms control. In each case, I would ask people more expert than I to begin the process of identifying key issues, exploring the possibilities, and suggesting a course of action. It might well be that my involvement, or the president’s would be necessary to close a deal, but the outlines would be drawn by those who know every nuance of the issues at hand. When I was secretary of state, I had an entire bureau of economic experts I could turn to, and a cadre of experts on nonproliferation and arms control whose mastery of technical jargon earned them a nickname, “the priesthood.” With the notable exception of Ambassador [Robert] Seiple, I did not have similar expertise available for integrating religious principles into our efforts at diplomacy. Given the nature of today’s world, knowledge of this type is essential.

If diplomacy is the art of persuading others to act as we would wish, effective foreign policy requires that we comprehend why others act as they do. Fortunately, the constitutional requirement that separates state from church in the United States does not also insist that the state be ignorant of the church, mosque, synagogue, pagoda or temple. In the future, no American ambassador should be assigned to a country where religious feelings are strong unless he or she has a deep understanding of the faiths commonly practiced there. Ambassadors and their representatives, wherever they are assigned, should establish relationships with local religious leaders. The State Department should hire or train a core of specialists in religion to be deployed both in Washington and in key embassies overseas.

The invasion of Iraq was intended as a demonstration of America’s power; it has instead shown the limits of that power. President Bush went to war because he believed that doing so was necessary to keep American safe. He surely did not intend, in the process, to cause what is taking place: a historic shift in the relative power of Sunni and Shiite Muslims not only in Iraq but throughout the region. The installation of a permanent government in Iraq marks the first time in history that Shiites have governed a leading Arab state. Officials in the major Sunni capitals of Saudi Arabia, Jordan, and Egypt worry about the emergence of a Shia “crescent” running from Bahrain to Iran, Iraq, Syria, and Lebanon. In a meeting in Washington during the spring of 2005, King Abdullah of Jordan expressed to me his concern about the possibility that the clash between the Sunnis and Shiites could supplant the conflict between the Arabs and Israelis as the core problem in the Middle East. For a millennium, Sunnis have been preeminent within Islam. The balance in the future will be more even; and no one can be sure what that will mean. King Abdullah warned, however, against allowing Shiite radicals in Iran and Iraq to represent themselves as legitimate descendants of Muhammad. Although moderates on both sides will seek to restrain the extremes, we should be aware of the potential for conflict – from verbal jousting to assassinations to the instigation, eventually, of a nuclear arms race between Sunnis and Shiites.

As I grow older, I am reminded of a good Catholic – the friend of a friend – whose chosen epitaph was “I leave the world as I entered it: bewildered.” The years have not brought me certainty about religion. I am a hopeful Christian but also an inadequate one, with doubts. I respect other religions because I think they are reaching for the same truth, though fro a different angle. The Protestant theologians Paul Tillich wrote, “Doubt is not the opposite of faith; it is an element of faith.” I like the sound of that. Ö Religion concerns itself with the hopes and fears of all the years; the terms of American presidents are not so expansive. The policies of the United States government have to be based on what we might hope to accomplish in a finite period on Earth, not on postmillennial expectations. At the same time, what we can accomplish on Earth is mixed up with the different understandings people have of God. As I travel around the world, I am often asked, “Why can’t we just keep religion out of foreign policy?” My answer is that we can’t and shouldn’t. Religion is a large part of what motivates people and shapes their views of justice and right behavior. It must be taken into account. Nor can we expect our leaders to make decisions in isolation from their religious beliefs. There is a limit to how much the human mind can compartmentalize. In any case, why should world leaders who are religious act and speak as if they are not? We must live with our beliefs and also with our differences; it does no good to deny them.