BOB ABERNETHY, anchor: Former Secretary of State Madeleine Albright has a new — and some say surprising — book out called “The Mighty and the Almighty.” While many diplomats have traditionally held a very secular outlook on their work, Albright argues that decision makers need to do a better job of understanding religion’s role in the world. She also suggests the government should use religious leaders to support and explain U.S. foreign policy. Kim Lawton talked with her.

KIM LAWTON: Former Secretary of State Madeleine Albright acknowledges that her new book “The Mighty and the Almighty” flies in the face of conventional wisdom on foreign policy. She wrote:

(reading from “The Mighty and the Almighty”): “Diplomats in my era were taught not to invite trouble. And no subject seemed more inherently treacherous than religion.”

(to Ms. Albright) Why did you change your views about that?

MADELEINE ALBRIGHT (Former Secretary of State and Author, “The Mighty and the Almighty”): Well, because I think that in looking at what was going on in the world, it was evident that religion and the force of religion and people’s interpretation of how they saw God, really is very much a part of international relations. Rather than keeping religion and religious leaders out of things, we need their help.

LAWTON: Albright sees many specific ways that religion should be factored into the foreign policy equation. 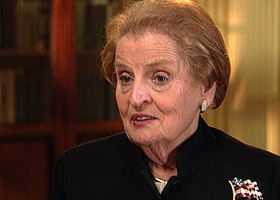 Ms. ALBRIGHT: Our diplomats are very well trained and they are very capable. But, they have not really focused on religion per se as a subject of study. A Secretary of State has economic advisors and arms control advisors and environmental advisors. And so, I would advocate having religious advisors that are complementing all the other advisors.

LAWTON: In addition, Albright makes the controversial suggestion that religious leaders be commissioned for a more hands-on role in diplomacy.

Ms. ALBRIGHT: I think they could be used prior to negotiations at high levels among different parties. And then, have religious leaders validate some of the decisions that have been made after negotiators have finished.

LAWTON: But she admits, it can be a delicate balancing act.

Ms. ALBRIGHT: It’s a question as to how much you really want religious doctrine to intrude into issues of how the state is run. I believe in the separation of church and state. But you cannot separate people from their faith. 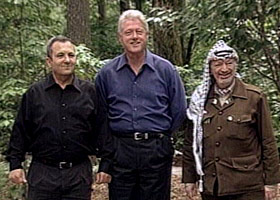 LAWTON: She concedes the Clinton administration didn’t always get it right.

Ms. ALBRIGHT: One issue where we considered a lot of the religious dimensions, but I think made some mistakes, was at Camp David. There were lots of aspects of the Palestinian issue that, as a Palestinian leader, Chairman Arafat could make decisions on. But when we were asking him to make the decisions about the holy places, the truth is that he did not have sole understanding or sole responsibility for the holy places.

LAWTON: But her book is also very critical of how the Bush administration handles religion. She read an excerpt at the National Press Club.

Ms. ALBRIGHT (reading from “The Mighty and the Almighty”): “We are not above the law, nor do we have a divine calling to spread democracy anymore than we have a national mission to spread Christianity.”

Ms. ALBRIGHT: I have a quote in the book that President Bush says, “God wanted me to be President.” And then much more of a sense that the United States is, has God’s blessing for everything. And that God is on our side. Rather than the way President Lincoln would have framed it, which is we need to be on God’s side.

LAWTON: Is it in some way different, though, than the way leaders in the civil rights era, you know, sort of invoked God is on our side and there is a divine mission here?

Ms. ALBRIGHT: I think it’s a very fine line in terms of when you think that God is blessing what you are doing, and you need that validation from God, versus saying that you are really doing God’s work in the particular way that has been stated by some people in the administration. 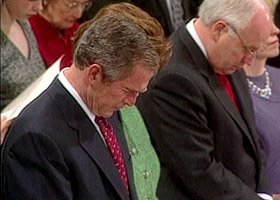 LAWTON: She believes President Bush has alienated potential allies around the world who disagree with his religious beliefs.

Ms. ALBRIGHT: What was happening was he was making it seem as if picking a fight with us was picking a fight with God. And so, I think that is a translation of his certitude about his faith that has created a certain antipathy to what is viewed as kind of an American missionary spirit.

LAWTON: Figuring out the appropriate boundaries, she admits, is a complex endeavor.

Ms. ALBRIGHT: We are dealing with very basic issues of human existence. And, everybody comes with a certain amount of their own history –thousands of years of culture and history. And when you try to answer very complicated questions with black and white answers –you can’t do it. And that’s why, I think, we need to be aware of the grays.

LAWTON: During the Clinton Administration, Albright sought to expand relations with American Muslim leaders. She established the now traditional State Department-sponsored Iftar meal to break Ramadan fasting. She says the stakes are even higher today. 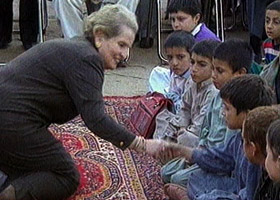 Ms. ALBRIGHT: We have to understand Islam better. I think we all have a tendency to generalize, to focus on the worst part of what is happening under the auspices, so to speak, of Islam. And that’s extremism and some of the violence.

LAWTON: Is democracy compatible with Islamic law? Can those two things come together?

Ms. ALBRIGHT: I think so. And there are actually those who argue that Islam is more democratic than other religions because there is not a hierarchical structure and you don’t necessarily need a cleric of some kind to interpret God for you. But, I’m not a theologian. And I haven’t turned into a religious mystic. I am a problem solver. And, so, I’m looking at it from that perspective.

LAWTON: Albright’s new focus on religion has raised eyebrows in the diplomatic community.

Ms. ALBRIGHT: My fellow diplomats, I think, are a little surprised. And, they really did look at me as if I had, you know, had ventured into some post Secretary of State mode where I just didn’t understand what was going on.

LAWTON: She says she doesn’t mind if she provokes some controversy if it means a conversation gets started.

Ms. ALBRIGHT: I’m not saying it’s going to be an easy sell. I think they — people will continue to say, “Let’s keep religion out of it.” And, there’s a good argument for doing that because it does complicate things. On the other hand, by not considering the role that religion plays, I think we are being oblivious to a whole dimension of the problems. And we, in many ways, are making it more difficult to solve problems.