BOB ABERNETHY, anchor: By some estimates, the number of children in this country being taught at home is well over a million and may be approaching two million, and in some states there is very little or no government oversight of what the kids are learning, which is just the way most home school parents want it. We have a Lucky Severson story today on the home school debate.

LUCKY SEVERSON: School kids from Houston having a field day -- home schooled kids, that is.

UNIDENTIFIED WOMAN #1: It's an opportunity for home schoolers to get together and socialize and have fun with each other.

SEVERSON: Twenty years ago, home schooling was often something parents did behind closed doors because it was frowned upon and even illegal in many states. Bruce Shortt is a home schooler in Houston. 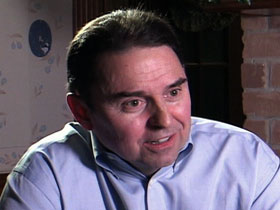 BRUCE SHORTT (Attorney and Author, THE HARSH TRUTH ABOUT PUBLIC SCHOOLS): Twenty years ago it was hard. I mean, you not only had to worry about, you know, the police showing up on your doorstep, but you really had to do a lot of work to prepare a curriculum and so on. People who are home schooling today are doing it because they see children flourishing academically, socially, and spiritually.

SEVERSON: Today, there are about 300,000 home schoolers just in Texas. Nationwide the number is estimated at close to two million. Robert Reich is a home schooling expert and critic at Stanford .

Professor ROBERT REICH (Stanford University): I think home schooling has changed in some dramatic ways. Whereas 10 years ago I think there were basically two kinds of home schoolers: the liberal wing of the home schooling populations and then the more conservative or religiously motivated group of the home school movement. But nowadays you've got your average sort of suburbanite who thinks they can do a better job with their kid in the home through a home school.

Jube Dankworth is national director of HomeSchooling Family To Family, a home teacher herself.

JUBE DANKWORTH (National Director, HomeSchooling Family to Family): They're telling the churches that, you know, God really says that you're in charge of your child's education, and you're supposed to bring the child up in the admonition of the Lord.

SEVERSON: Bruce Shortt is the author of THE HARSH TRUTH ABOUT PUBLIC SCHOOLS. He home teaches his three sons, with a little help. Hugh, for instance, learned Mandarin from a Mandarin teacher, German from a German teacher -- the same with Spanish. He says we need a system of private and home schooling education without government involvement.

Mr. SHORTT: The goal is to encourage the development of a new system of Christian public education, public in the sense that it's open to anybody but controlled by parents, not unions, politician, and bureaucrats. 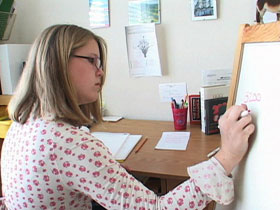 SEVERSON: In this suburban home, larger than some rural school houses, home schooling parents rely on each other, as they often do, to judge the debating among their kids.

UNIDENTIFIED TEENAGE GIRL #1 (speaking during debate): …and they don't solve the problem and I would strongly urge a negative ballot at the end of today's debate. Thank you.

SEVERSON: The average cost of home schooling nationwide is about $600, and some end up spending considerably more for books and tutors and coaches. All agree it's a full time commitment often requiring one of the parents to stay home.

TERESA STRACK (Home Schooler): I have got a nice collection of old readers that I just love. Some of them are ones I had myself when I was in school. And we have our library organized according to grades, so my kids can start off here in pre-school, in first grade, second grade, third grade, fourth grade, fifth grade -- all the way on over to 12th grade.

SEVERSON: More often than not, the home library will include a large section of Christian books.

SEVERSON: Rena Sumbera schools her two children at home in an upscale Houston neighborhood because… 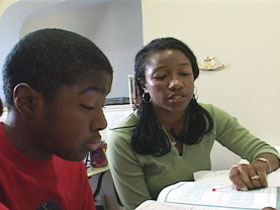 Ms. SUMBERA: …we are Christian. That was not introduced in the school, will never be introduced into the school. And it was something that was important to us.

YOSHIKA LOWE (Home Schooler, tutoring her son): You are going to convert ten-thirds into sixths.

SEVERSON: Yoshika Lowe has a degree in science but teaches her three kids at home, in part because she wants them to learn that there is an alternative to evolution.

Ms. LOWE: We don't believe that humans came from animals, because that would mean that they weren't made in the image of God.

NATHAN LOWE (Student): I believe that evolution is relatively far fetched and that creationism makes sense.

SEVERSON: The U.S. ranks number 17 among industrialized nations in math and science and trails in other basics. In the inner city, where home schooling parent Voddie Baucham grew up, the ranking would be even more dismal.

JAN SNOW (Microbiologist and Home Schooler, teaching frog dissection at Parents Cooperative): Remember, when you get up on the head you are going to have to actually scrape across the eye socket.

SEVERSON: This is not a school class, it's a parents cooperative in a local church, an example of how home schooling families are joining together to pool their resources and pay for specialized instruction.

Ms. SNOW: When you open him up, you will see that there is a small heart.

SEVERSON: Home schoolers are quick to point out that their own surveys show their kids are outperforming those in public schools. They cite statistics that home schooled kids read better in comparable grades, score better on ACT and SAT tests, and have a higher GPA average in college. 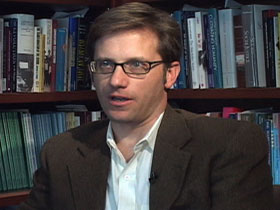 Prof. REICH: The worry I have about those claims is that it's based on research that has been done almost exclusively by home school advocacy organizations, and so it's not an accident that very little of the research on home schooling has not appeared in peer-reviewed academic scholarly journals.

SEVERSON: One of the most common criticisms of home schooling is that the kids miss the socialization they would experience in public schools.

UNIDENTIFIED WOMAN #2: It's park day -- just get together and meet in the park. Today we are having a cookie swap.

SEVERSON: Most of these kids do have opportunities to socialize, but often only with other home schoolers.

JASMINE: I don't have peer pressure, and I'm more focused on education than socialization or other things like that. But education is not about socialization. It is not where you are supposed to be getting your socialization.

UNIDENTIFIED TEENAGE GIRL #2: I think I am missing out maybe on the socialization and all that, but if I went to public school there's also probably a lot more worse that would come with it versus there being something better.

SEVERSON: It's not socializing that worries Professor Reich. He argues that the state has an interest in knowing children are growing up to become well rounded public citizens.

Prof. REICH: If parents can control every aspect of a kid's education, shield them from exposure to the things that the parents deem sinful or objectionable, screen in only the things which accord to their convictions, and not allow them exposure to the world of a democracy, will the children group up then basically in the own image of their parents, servile to their own parents' beliefs?

SEVERSON: According to a home schooling sponsored survey, the vast majority of graduates say they enjoyed the experience. Most of the kids attending the conservative Christian Patrick Henry College in Virginia have been home schooled. In fact, Patrick Henry was founded by the Home Schooling Legal Defense Association, which has grown to be a powerful voice in the country. 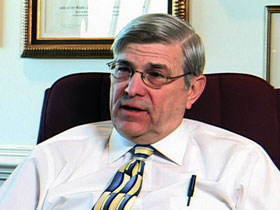 J. MICHAEL SMITH (President, Home School Legal Defense Association): Since 1990 we've seen over 30 state legislatures that have passed home schooling laws, and for those to be successful, the home schoolers have had to be involved. They can't afford to pay for lobbyists, so they simply have to do it with hard work and numbers.

SEVERSON: So far, their efforts have been quite successful. Only six states require extensive regulations, and 25 have little or no home schooling regulations at all. But Professor Reich says that's not necessarily a good thing.

Prof. REICH: I'm not anti-home schooling in the sense that I want to see home schooling banned. I want good regulations to apply to those parents who choose to home school.

SEVERSON: Reich says without some kind of regulation, the states won't have any way of knowing who is being home schooled, how well they are doing, and who is not being schooled at all.

Mr. SHORTT: I think it's ironic that someone with an obviously authoritarian agenda is attempting to lecture others, and unfortunately education seems to be one of those areas in which the failures astonishingly insist upon trying to regulate the successful.

SEVERSON: As of now, churches seem reluctant to tell their congregations to put their kids in private or home schools. But even without that endorsement, the U.S. Department of Education acknowledges that home schoolers are growing ten times as fast as the general school age population.

By some estimates, the number of children in this country being taught at home is well over a million and may be approaching two million. Yet in some states there is very little or no government oversight of what the kids are learning, which is just the way most home school parents want it.