BOB ABERNETHY, anchor: Now a story about a former state legislator who believed the answer to crime was more and more prisons -- until he got locked up himself. Now he's leading a faith-based program for prisoner rehabilitation, and he says it works. Compared to a national recidivism rate of 67 percent, for his ex-cons, he says, it is just eight percent. Lucky Severson reports.

LUCKY SEVERSON: It's been a long haul for Pat Nolan, raised in a family of nine children in a crime-ridden Los Angeles neighborhood.

PAT NOLAN (President, Justice Fellowship, Prison Fellowship Ministries): Crime was an absolute part of our life there to the point that every time you went out, whether to church or school or the store, you were in danger of being robbed or knocked down and beaten.

SEVERSON: Then, after Catholic school and law school, Nolan won a seat in the California Assembly and became the Republican minority leader hell-bent on putting the bad guys in prison.

Mr. NOLAN: We built more new prisons than any state in history. We built more -- I think it was 11 or 12 prisons, not one new university, and I think that's a sad commentary. But at the time I thought that would make us safer. 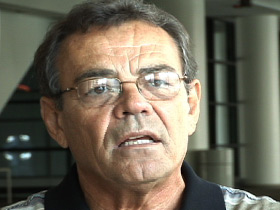 JACK COWLEY (Former Warden, Oklahoma Department of Corrections): He was a madman. He was Attila the Hun when it comes to lock them up and throw away the key.

SEVERSON: But then the "lock-em-up" assemblyman got locked up himself, caught accepting illegal campaign contributions in an FBI sting. Nolan spent over two years in prison and was shocked at what he experienced there.

SEVERSON: Suddenly the hard-nosed prison builder had a change of mind and heart himself. He found a new calling -- reforming the system he helped build, a system he now calls human warehousing. He's still in favor of locking up the bad guys but says there are too many people who could be productive citizens languishing behind bars. And he is not alone. Mike Schnobrich is with the Council of Prison Locals and a guard at the U.S. prison in Florence, Colorado.

strong>MIKE SCHNOBRICH (Council of Prison Locals and Guard, United States Penitentiary Administrative Maximum Facility, Florence, Colorado): When I hired on back in '92, we were told that we no longer engaged in any sort of rehabilitation. If an inmate has a drug problem, they can do a little bit of drug treatment, they can get a GED, but not a whole lot more after that. And so it really is, for the most part, almost a warehousing operation. And I think there's not too many people in the system who would disagree.

SEVERSON: Nolan now heads a faith-based program that operates in several states called Justice Fellowship, an arm of Prison Fellowship Ministries. It offers mentoring programs for inmates while they're still in prison and when they get out, so they'll stay out. This year 650,000 Americans will be coming home from prison, most of them unprepared to re-enter society. That worries former wardens like Jack Cowley. 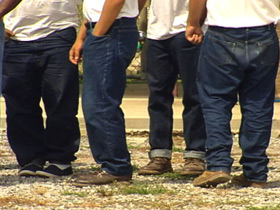 Mr. COWLEY: Because [we] can no longer tolerate a 67 percent recidivism rate in this country. It's not tolerable, and we're not going to put up with it anymore. Quite frankly, it's got to stop.

Mr. COWLEY: You can't afford, as a taxpayer, a $60 billion ticket for crime in this country any longer. Bridges are falling down, people, and we cannot afford to take this money and put it in something that is no longer working.

SEVERSON: There are two sets of statistics that help explain the impact on our society of U.S. prison policy. Number one: 95 percent of Americans sentenced to prison are going to be coming out, maybe to your neighborhood. Number two: as many as seven out of 10 of those will end up back in prison within three years. There are so few rehabilitation programs very few offenders are prepared to make it on the outside. And it's no wonder that most employers won't hire them.

One exception is Korns Galvanizing in Johnstown, Pennsylvania. At any given time, at least half the workers here are ex-cons like Jack Shipley who spent over 43 years of his life behind bars for burglary and robbery. He's was shocked when he applied at Korns over three years ago. 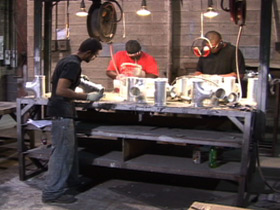 JACK SHIPLEY (Employee, Korns Galvanizing Company): And then I explained to Mr. Heider who I was and what I was in this town, and he said, "We don't care. We don't care at all." He said, "What we care about is what you can do, you know, if you can work."

BARRY HEIDER (Vice President, Operations, Korns Galvanzing Company): A lot of these fellows just pump me up. They've got smiles on their faces and an attitude to succeed.

SEVERSON: Barry Heider is the boss here, the man who was willing to take the risk, and it's a risk that's paid off. The company is preparing a study on how many of the 150 or so ex-con employees have stayed out of prison, but Heider says he's certain Korns' rate of success is much better than the national average.

Mr. HEIDER: But I think our success rate altogether is far better, and, again, that has to do with support, what they receive allegedly from the penal system is guidance. But there's no support.

SEVERSON: The support comes from one another, from people like Harry Price, in prison 10 years for robbery. He's been out seven and is now the plant supervisor.

HARRY PRICE (Plant Supervisor, Korns Galvanizing Company): It has what we call Korns love. We're a little rough on each other, but we won't let someone else come in here and be rough on us.

SEVERSON: Religion is an important part of the program here, although no particular religion. Most employees attend church services and receive constant mentoring from the old-timers. 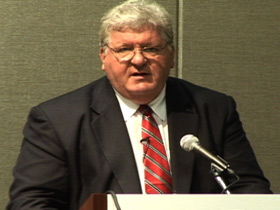 Mr. NOLAN: And the problem is we do nothing to reform the character of inmates to change their heart. They have no moral framework to decide whether something's good or bad.

SEVERSON: Nolan is becoming a loud voice nationally for prison reform. Governor Schwarzenegger has appointed him to a strike team to fix California's prison system. He travels extensively, speaks constantly, and spends a good deal of time lobbying Congress. He has become a force to be reckoned with. Jack Cowley said at first he was skeptical of Nolan's motives.

Mr. COWLEY: Oh, here's just another one of those politicians who went to prison and found the Lord, and, you know, I've got to put up with this. But he is the genuine deal. Yes, the genuine deal.

Mr. NOLAN: Morally we have to care about them. This is a child of God, and just as they have sinned, we've sinned, and if we can accept Jesus' forgiveness, how can we deny it to them?

SEVERSON: Many of the prisoners released this year were incarcerated for nonviolent crimes like drug possession, which landed Sedrick Crochron in prison. He's now a Korns employee.

SEDRICK CROCHRON (Employee, Korns Galvanizing Company): I had a son. I tried to take care of him the fast way and, you know, "Johnny Lawman" caught up with me. 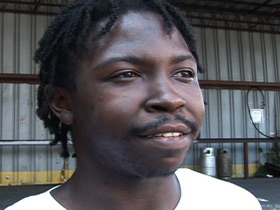 SEVERSON: What's changed in Sedrick's life is that he now has a skill and someone who cares for him.

Mr. CROCHRON: They're excellent bosses. I like Harry and Barry. They're like the uncles I never had.

Mr. NOLAN: A University of Pennsylvania study studied our graduates with a matched set of people with similar offenses. Those that graduated from our program, completed it all, had an eight percent recidivism rate.

SEVERSON: There are still wardens who are reluctant to allow such things as mentoring programs, but reformers like Jack Cowley are fighting back.

Mr. COWLEY: What we tell wardens is you're no longer the king, as I used to be, quite frankly, behind these walls, because what goes on here affects my life outside. It affects my public safety. And what I tell wardens is, okay, you don't want to reduce recidivism -- fine. I'll just call the local newspaper and tell them that you're not interested in providing programs that work.

SEVERSON: Pat Nolan is convinced that his time in prison was all part of God's plan to get him where he is today.

Mr. NOLAN: C.S. Lewis says that we're like God's sculptures, and it's the chisel strokes that are so painful that he uses to make us his work of art.

SEVERSON: These days you'll find this sculpture-in-motion lobbying Congress and anyone who will listen for a new Second Chance Act to help prisoners re-enter society.

A story about a former state legislator who believed the answer to crime was more and more prisons — until he got locked up himself. Now he’s leading a faith-based program for prisoner rehabilitation, and he says it works.