BOB ABERNETHY, anchor: Another deadline looms for the U.S. Episcopal Church. Episcopal bishops are meeting in New Orleans until Tuesday (September 25), and a key item on their agenda is an ultimatum on gay issues from leaders of the worldwide Anglican Communion. The Episcopal Church is the U.S. branch of the 70-million-member Communion. The spiritual leader of the Communion, the Archbishop of Canterbury Rowan Williams, joined the bishops for part of their meeting. Kim Lawton is in New Orleans and has our report. 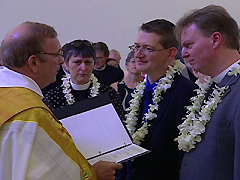 KIM LAWTON: The Episcopal bishops and Archbishop of Canterbury Rowan Williams emerged from their closed door meetings Thursday (September 20) for a public ecumenical prayer service. Despite the deep divisions facing their church, there was a moment of unity as the bishops presented contributions of nearly $1 million to help rebuild the Gulf Coast.

(to Archbishop Rowan Williams): I’m just wondering what you thought about what you saw and heard here today?

LAWTON: But the main reason for the Archbishop’s visit was to discuss the issues that could tear the Anglican Communion apart. He spent a day and a half in frank conversations with the American bishops.

Archbishop WILLIAMS (during press conference): I think it would rather be an admission of defeat if we said that we were not capable of working together on the issues that divide us. Whether we’ll get to that point I don’t know.

LAWTON: This is a regularly scheduled business meeting for the bishops, but it comes on the eve of a crucial deadline, and what happens here could affect the Episcopal Church’s future status in the Anglican Communion. In February, the top leaders of the Communion’s regional churches gave U.S. Episcopalians until September 30th to clearly state that they will not consecrate any more gay bishops or authorize any more same-sex blessings. Failure to do so, the leaders said, would have unspecified consequences for the Episcopal Church’s place in the global church body. Some are speculating that the U.S. church could be asked to leave this historic branch of Christianity. 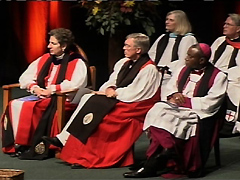 Bishop KATHARINE JEFFERTS SCHORI (Presiding Bishop, U.S. Episcopal Church): We are eager to continue and grow our relationships around the Communion, and I think most people believe those relationships will not change significantly.

LAWTON: But relationships have been severely strained since 2003, when the Episcopal Church consecrated an openly gay bishop, Gene Robinson of New Hampshire, and paved the way for the blessing of same-sex unions. That set off a firestorm of controversy in the U.S. and within more conservative Anglican churches in Africa, Asia and South America — the so-called Global South.

Bishop JOHN GUERNSEY (Anglican Church of Uganda): When the church really, in our view, departed from biblical authority and the historic teaching of the church it was no longer a matter of simply staying together as if nothing had happened.

LAWTON: John Guernsey is rector of All Saints Church in Woodbridge, Virginia, and he’s also a new bishop for the Anglican Church of Uganda. Guernsey’s parishioners decided to leave the Episcopal Church last year, but they still wanted to be part of the Anglican Communion. So they put themselves under the authority of the Church of Uganda, which shares their traditional views.

Earlier this month in Uganda, Guernsey was consecrated as an Anglican bishop. But he’ll be working in the U.S., overseeing 33 congregations that have affiliated with the Church of Uganda. None of the congregations is ethnically Ugandan.

In August, two American priests were also made bishops for the Anglican Church of Kenya. Still others are now bishops for the Church of Nigeria, all overseeing congregations in the U.S. It’s a point of deep contention across the Communion. At the Tanzania meeting, the Anglican leaders urged overseas bishops to stop intervening in U.S. dioceses.

But Guernsey says the Global South wanted to find a way to support disaffected American conservatives. 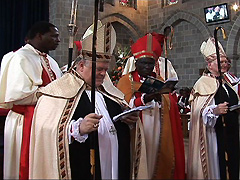 Bishop GUERNSEY: The Global South has felt that they were not going to abandon those who have taken a faithful stand here in the U.S.

Bishop JOHN CHANE (Diocese of Washington, D.C.): They need to understand how painful that is in the life of my province, my church, the Episcopal Church, and how much it undermines the very concept of what it means to be an Anglican or to be a part of the Anglican Communion.

Bishop JEFFERTS SCHORI: We elect our own bishops, we do not appoint them, and that they are elected and consecrated for work in a particular diocese by the members of that diocese.

LAWTON: One overarching concern is church authority. Each of the 38 regional Anglican bodies is self-governing. Neither the Archbishop of Canterbury nor any other Anglican leader is supposed to tell another province what to do.

Bishop CHANE: For me, as one bishop, the issue is who’s going to control the Communion, who’s in charge, who has the power, which is an unusual place to be in, given the loose confederation of churches and provinces that make up the Anglican Communion.

LAWTON: Decisions for the Episcopal Church are made by a convention of clergy and lay delegates that meets every three years. Episcopal bishops say they don’t have the authority to respond to the demands made in the Tanzania ultimatum. The last General Convention in 2006 passed a nonbinding resolution calling on Episcopalians to “exercise restraint by not consecrating” future gay bishops for a time. But that wasn’t strong enough for many conservatives in the U.S. and around the world. And, indeed, Tracey Lind, an openly lesbian priest, is one of five candidates on the ballot to become the next bishop of Chicago.

Bishop JEFFERTS SCHORI: The Diocese of Chicago has every right to nominate anyone who is qualified in the church, and we do understand that gay and lesbian priests in relationships are qualified at this point. 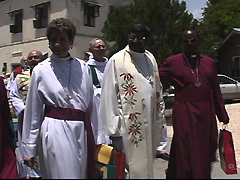 LAWTON: Individuals, and some entire congregations, have been leaving the Episcopal Church, but exact numbers are hard to pin down. Conservatives represent a minority in the U.S. but a majority around the world. Some of the departing congregations are in the middle of contentious lawsuits over whether they can keep their church buildings. The Episcopal Church says the property belongs to the diocese, not the parishioners. Many churches find themselves caught in the middle — unwilling to leave the Episcopal Church, but frustrated by the lack of a satisfactory resolution.

Bishop CHARLES JENKINS (Diocese of Louisiana): I’m tired of the disagreements. I would like to have the disagreements settled. What I’m not willing to do is to settle the disagreements at the price of the mission of the church. I hope that we will find the space, the time, and the freedom to search for more long-lasting and I think creative solutions than we’re able to do in the anxious system in which we live in now.

LAWTON: The Presiding Bishop says she’s optimistic that progress will come out of this New Orleans meeting.

Bishop JEFFERTS SCHORI: Greater understanding, both within this church and across the Communion. A greater sense that we are one in our diversity and that we can continue to be one.

LAWTON: Others aren’t so sure.

Bishop GUERNSEY: If what’s being sought is some kind of artificial fabricated institutional unity to paper over foundational differences over who Jesus is and what he has done and what his work on the cross means for us, then I don’t think there’s any future in that.

LAWTON: After the meeting here in New Orleans, conservative bishops will hold their own meeting to craft their response. I’m Kim Lawton in New Orleans.