Read more of the R & E interview with the Rev. John Guernsey, Bishop for Congregations in America for the Church of Uganda:

Q: How did you end up a bishop with the Anglican Church in Uganda? 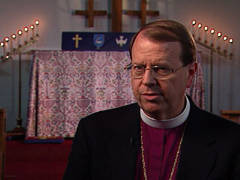 A: God has his ways, and his thoughts are not our thoughts, and his ways are not our ways, but I’ve had a long association with the church of Uganda. I first went to Uganda in 1989 on a SOMA [Sharing of Ministries Abroad] mission trip, and I’ve been back many times. We had a long-term partnership with both the provinces and also with what became our jurisdictional diocese, the diocese of North Kigezi, and when we separated from the Episcopal Church in 2006 we went under that diocese, and so when the church of Uganda felt it was time to have an American bishop to help look after the churches here, they were led to call upon me to do that.

Q: Why did the church of Uganda feel it was necessary to have a bishop here?

A: Well, there are 33 congregations here, and new churches are being planted, and that number will doubtless increase. While the relationships have been extraordinarily fruitful between U.S. parishes and Ugandan dioceses and bishops, they are thousands of miles away, and they really felt the need for those bishops to be supported by a bishop on the ground here who can be more immediately available to their congregations.

Q: Are these congregations primarily Ugandan in makeup?

A: No. Actually they are almost exclusively ethnic American, though American congregations are a wonderful ethnic hodgepodge in and of themselves. They’re not ethnic Ugandan congregations, but congregations that have been formed here.

Q: Why in 2006 did you make the decision to separate from the U.S. Episcopal Church?

A: Well, we [All Saints Church, Woodbridge, Virginia] had been trying to hang in there with the Communion processes of responding to the Episcopal Church’s unprecedented actions in 2003 to depart from the teaching of the Anglican Communion, and it became clear to us that the Episcopal Church was clear in its path, and it was as a result of an extended period of prayer and negotiations with our diocese to come up with an amicable plan and process of separation, and that came to be concluded in 2006, and we made the move at that time.

Q: Some in the Episcopal Church saying they want to find a way to keep everybody at the table, that there’s something they can still do. Why did you feel there wasn’t anything they could do?

A: When the Church, really, in our view, departed from biblical authority and historic teaching of the Church, it was no longer a matter of simply staying together as if nothing had happened, and if the Church was willing to turn back and come back into historic teaching and conform to the requirements of the Anglican Communion, then that would have been a different matter. But the Episcopal Church has clearly made its decision and is moving forward full speed ahead.

Q: International church leaders had asked that there be a pause or a ceasing of some of these African churches from coming here and building relationships and trying to have oversight. Why hasn’t that stopped?

A: I think that the feeling is there needs to be a provision of pastoral care and oversight for churches, many of which are very hard pressed. There are certainly, as you know, lawsuits and canonical actions taken against churches, and in turn the Episcopal Church has not paused from its course, and until there was a return to the status quo, really pre-2003, the Global South has felt that they were not going to abandon those who have taken a faithful stand here in the U.S.

Q: Update us on what’s happening now since you separated from the Episcopal Church. Currently you’re still in the building that you had been in, but you have alternative plans.

A: We agreed with our diocese to relinquish the building that we’re in and that we’re using. We’ve turned it over to the diocese, we gave the title to the diocese, but we have a lease to use it for up to 5 years to allow us time to build a new church on land which we own, which we got in the settlement, though it has a large debt on it. We were able to retain title to that property, and we’re very excited about moving in as soon as finances permit us to build that new building.

Q: Was it a hard decision for people? Was there a feeling that “we’ve been here and we should be able to stay here”?

A: No. I think there’s a real sense of excitement about moving ahead. We know we’ve outgrown this building and have plans to move ahead, and so I sense that we really — that God answered our plans and made it possible for us to stay here as long as we need to be but really allowed us to move ahead with our vision and our future ministry.

Q: Other congregations in this area that found themselves in the situation you did chose to align themselves with other churches in Africa, such as the church of Nigeria. Why did you choose Uganda rather than Nigeria?

A: It was because of our long-term mission partnership and relationship with the church of Uganda. I had been there 6 times, it was very natural, we’ve had many people from our parish go on mission trips to Uganda, and friends including the bishop who was a mission partner, who became our diocesan bishop and visited us here — and so it was really out of that relationship. There was nothing negative about any other province, or any other church, or any other option available to us, but only the most positive sense of draw and spiritual connection with the church of Uganda.

Q: The church in Uganda ordains women, which not all provinces do. Is that a factor?

A: Yes. Our associate rector here is a woman, and for that reason Uganda was also a very appropriate place for us.

Q: When you look at the overall scene, how key is the current moment for the future of the worldwide Anglican Communion?

A: It’s a very crucial time. The decision upcoming of the House of Bishops of the Episcopal Church will put the Episcopal Church really on record in its response to the Communion and the Windsor Report, though it’s already made its will very clear from the meeting of the House of Bishops last March and the meeting of the Executive Council in June. But nevertheless it will say very clearly to the world where the church stands in not turning back and continuing on the course that the Episcopal Church has in fact been on for many years. But just as importantly and in many ways much more significantly in terms of the positive movement of the church and the realignment is the Common Cause Council bishops’ meeting at the very end of September, an unprecedented bringing together of biblically faithful and orthodox Anglicans of a number of different jurisdictions going back to those who separated from the Episcopal Church with the Reformed Episcopal Church in the 1870s. There’s been a tendency in some groups to break free from the Episcopal Church and then in turn separate and splinter. This is a historic and unprecedented uniting, a reversal of that pattern of smaller and smaller groups, but rather bringing groups of a number of Global South jurisdictions as well as others to form a biblical, united, missionary Anglicanism here in the U.S.

Q: Is that what is happening? I’ve heard people call this the Anglican Union.

A: I think the participation of the Global South and others in the consecrations in Nairobi and in Uganda demonstrate that very clearly. My understanding is that primates representing probably 75 or 80 percent of the worshipping Anglicans in the world were represented by their archbishop at the consecrations in Nairobi. And, clearly, while there weren’t as many representatives present in Uganda, that same level of support was there.

Q: What message is that sending to the U.S. Episcopal Church and also to others watching the Anglican Communion?

A: I think there’s vibrancy in biblical Anglicanism that we see in so much of the Global South that is tremendously attractive. Our experience here in America is that this kind of passionate faith and unapologetic proclamation of Jesus Christ is magnetic for people. There are many who are drawn to it, and I think it’s sending a very positive message far and above any political message within the church. It sends a missionary message that we want to be about the positive proclamation of Jesus Christ.

Q: Others are still saying “we still can find some kind of common ground, we can still find a solution; people need to try to find paths toward unity.” Is that still possible, and is it still something to work toward?

A: I said at my consecration in Uganda that the only real unity is unity around the person of Jesus Christ. If what’s being sought is some kind of artificial, fabricated institutional unity to paper over foundational differences over who Jesus is and what he has done and what his work on the cross means for us, then I don’t think there’s any future in that. If we can come together around the person of Jesus and his unique and saving work on the cross, then all things are possible, but it has to be a true unity based on biblical faith and the uncompromising gospel of Jesus Christ.

Q: Are parishes like yours, dioceses like yours, really willing to say that if what they create is not the old Anglican Communion per se but something else that’s okay?

A: That’s a fair question, and I don’t hear people really setting up those kinds of defining terms. I think people are concerned about moving ahead in mission, and my conversation with churches that are under the Global South, not just Uganda but Kenya, Nigeria, Bolivia, Rwanda, is there’s just a tremendous sense of spiritual freedom, excitement, and blessing in being under the leadership of faithful bishops and archbishops. I think there’s a real trust of those spiritual leaders to deal with those global Communion geopolitical questions. I think the churches want to be about the mission that God has given to them and trust faithful leaders to hammer out those issues, realizing they may take a generation to ultimately sort out.

Q: Many people are under the impressions that this is all about the issue of homosexuality. Is that what this is about, or is it something bigger?

A: It’s about the authority of scripture, the historic Christian message, the person of Jesus as unique and sole lord and savior of the world. Those are the foundational issues. Clearly the working out of biblical authority is played out in any number of arenas, and human sexuality is an important one. But we spent a great deal of time in our congregation talking about the struggles of Internet pornography among heterosexuals than we do taking on the issues of homosexuality. It’s not distinctively issues of this or that group; it’s about foundational issues of salvation and the authority of scripture and the person of Jesus Christ.

Q: What do you hope the Archbishop of Canterbury talks about with the U.S. Episcopal bishops in their meeting behind closed doors?

A: I hope there’s a clear call to repentance and to return to the historic teaching of the Christian faith and the Anglican Communion.