Q: How key is this moment for the US Episcopal Church? 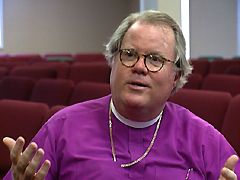 A: Well, I think it’s obviously a critical moment. It is an important moment. I don’t think there should be a live or die moment, however, for the Episcopal Church in the United States. There certainly are many who want to paint it that way, but I’m not certain I agree with that depiction.

Q: How much pressure is the U.S. Church feeling from the rest of the world?

A: I think the larger question is what is the capacity of the United States Church or the Episcopal Church to absorb pressure from others? And some people feel a great deal more pressure than others. I think that if [there is] anything I’ve learned from the last several years of life here in New Orleans it’s been that we have an incredible capacity for others’ anxiety.

Q: What are you hoping to hear from the Archbishop of Canterbury? What does he need to do or say?

A: Well, as bishop of Louisiana I certainly want him, and I’ve made arrangements for him, to come speak to the city of New Orleans and to talk about redemptive suffering, to talk about the work that we’re doing to encourage us and to thank us, and that is very important to me as bishop of this city. I want the archbishop to acknowledge the good work that the Episcopal Church does throughout the world, to acknowledge the importance of mission, and I want the Archbishop of Canterbury to call us all to sacrifice. One of the odd questions that has been posed has been really half a question, and that is upon whose back will this settlement go forward? And there’s violence on both sides of this issue. If the Episcopal bishops make a response too far one way, then we see hand grenades thrown through the door, let’s say, of a Christian assembly in Pakistan. And on the other hand we all know of young men who are beaten and brutalized and tied to a fence and left to die in the American West. I think equal sacrifices [are] what I would have the archbishop call us to, and show us that in so doing as Christians we all win. We all do good, we’re all sanctified and made holy in doing that. I hope that we will find the space, the time, and the freedom to search for more long-lasting and I think creative solutions than we’re able to do in the anxious system in which we live in now.

Q: Some people feel there’s been too much time spent already. Conservatives, people aligning with churches in Africa say it’s taken too long and they are leaving. Others say the rest of the world is pushing the U.S. Church around and they are tired of that. How many people feel caught in the middle?

A: I don’t know how many people are feeling in the middle. I can tell you that I think we need to look at our codependent reactivity. Just because we’re tired doesn’t mean that we give up doing the right thing, or because somebody else is pressuring us that we stop doing the right thing. Nor do I think that necessarily we are compromised by taking a mature look at the situation that confronts us.

Q: Is it still possible to hold everything together?

A: It is absolutely still possible to hold everything together. I take great comfort in the high priestly prayer of our Lord Jesus Christ in Saint John’s Gospel — that we all may be one as he and the father are one. I think that it’s going to take a bit of creativity, out-of-the-box thinking, and the question is not how little can we do, or simply what can we not do because of our polity of the American church and the canons of the American church, but how much are we willing to do?

Q: Could there be a major realignment? When you talk about creativity, could there still be something that no one has really envisioned before?

A: Yes, indeed. But I don’t know that that would necessarily be a realignment. We certainly envision that time and time again, but I’m hoping and praying for something new and creative. One of the issues that has not been dealt with adequately by brains greater than mine is the impact of globalization, the huge shifts of people around the world and instant communication and urbanization and dwindling resources and the green issues around the environment. What does that have to do with this little conflict that we’re feeling in the Anglican community? I think there’s something there.

Q: What do you have to say to those Americans becoming bishops within the various African communions?

A: Well, my observation is the more bishops we have, the smaller the church gets.

Q: So what message would you have for Episcopalians and Anglicans as they watch all of this unfold? What would you like them to hear coming out of the meetings?

A: Take heart. It is God’s church. We are God’s hands and feet, and I believe if we continue with mission, God will guide us through this, and not just simply help us get through but get through wonderfully and gloriously. So take heart and be strong and trust in the Lord.