BOB ABERNETHY, anchor: Bishop T.D. Jakes and other black church leaders announced a new initiative to promote HIV/AIDS testing and awareness in their congregations. Almost half of all new HIV diagnoses are among blacks. Evangelical churches, both black and white, have long been accused of not doing enough on the issue. But Kathi Winter is one evangelical trying to change that. It's a very personal crusade for her, as Kim Lawton reports.

KIM LAWTON: Kathi Winter is a busy executive in the travel industry, but every three hours she stops to pop a pill. Winter takes a lot of pills everyday. She's HIV positive, and her "cocktail" of meds keeps AIDS at bay.

KATHI WINTER (Founder, Believing Education for HIV): I really feel blessed to have them, because so many, many people in the world don't. So when I take them I actually say, "Bless you Lord, bless you." You know, I'm thanking God because I have the money and I have the opportunity to have a good doctor. 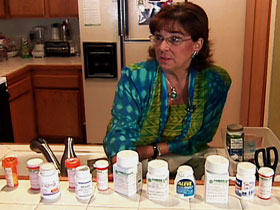 LAWTON: Winter is an evangelical Christian in Orange County, California. She's made it her life's mission to educate the public, and churches in particular, about HIV, the virus that causes AIDS.

LAWTON: Winter contracted HIV more than 10 years ago. She was newly divorced and lonely and got involved with the evangelical leader of a ministry to the homeless. She calls him "Fred" to protect his identity.

Ms. WINTER: I knew he had been on drugs, and I knew somewhere that that was dangerous, but I felt that love conquered all, that it was okay. God gave me this love, you know, it would be all right.

LAWTON: Fred got sick, and Winter took him to the hospital. He was diagnosed with full-blown AIDS. Doctors urged Winter to get tested for the HIV virus.

Ms. WINTER: I found out that Fred had been told he was HIV [positive] about nine years before he met me, and he denied it, and this is a very typical thing. Denial is a huge part of HIV for everybody. I denied that I could get it. He denied he had it. I think the betrayal was worse than getting the disease, and I think many people who get HIV -- it's because of betrayal. The partner lies, or the partner doesn't know. The partner's never been tested, or the partner won't wear a condom, the partner won't get tested.

LAWTON: Her positive test results led to a spiritual struggle.

Ms. WINTER: I really had a lot of soul searching and crying, and crying out to God and saying, "Where were you, God? I accepted you as my Lord. Where were you? Why didn't you protect me?" And I think a lot of people expect God to do the work that they should do themselves. I didn't protect myself. I can't blame God. But it took a while for me to get over that. 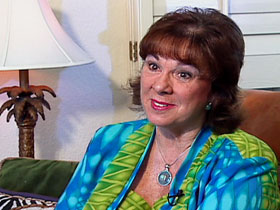 Ms. WINTER: I would say that the way you get to forgiveness is to really express the pain. If you keep it inside in your heart, it grows like a bad weed and it ruins everything, and God really showed me that.

LAWTON: She now actively works to raise awareness about HIV, especially in churches. She credits pastor and best-selling author Rick Warren and his wife Kay with pushing evangelicals to realize they need to overcome the stigma that often surrounds HIV.

KAY WARREN (speaking at church): Do you know how completely out of the ordinary it is for a church to be full on World AIDS Day saying, "We care about people who are HIV positive"? It's amazing.

Ms. WINTER: For 25 years, we have wanted it to be or thought of it as a gay disease, and I think that the churches have not known how to deal with that. It's a sex issue. Some churches don't like to talk about sex, and they don't want to think that it's in middle America. 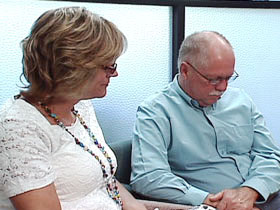 LAWTON: Winter has formed a ministry called BEHIV, Believing Education for HIV, and she does HIV/AIDS education overseas as well, in places like China and Africa where she has a special focus on women affected by the disease.

Ms. WINTER: This is a beautiful girl that I met. She's 26 years old, and she has AIDS. She'd just lost her husband and baby last year, and she was so full of sadness, and she was so afraid to let go of his memory because then that would mean she didn't love him. And I encouraged her to find an AIDS child to take care of as a way to heal. When you give out of service, and you find others that are worse off than you, you stop the self-pity.

LAWTON: She also leads a support group for others living with HIV.

Ms. WINTER (speaking to group): You look really good for it being your birthday! How are you feeling?

UNIDENTIFIED WOMAN (talking to Ms. Winter): Great. You know, birthdays really for me are a time of reflection. I found out I was HIV positive. I was 26 years old. I thought maybe I had a year to live. I mean, it's just -- you hear those words, you know, HIV, AIDS, and you think death immediately. And I thought, well I've got a year to live. And so here I am, almost 17 years later, and you know, praise God, it's by, you know, his grace every day. And I'm married, you know. ever thought I'd get married.

UNIDENTIFIED MAN (talking to Ms. Winter): Now me being HIV negative, Jennifer positive, we can share with people and educate them, and our life is a witness to them. I said, you know, it's okay to kiss her. That's not going to transmit HIV.

LAWTON: In addition to her HIV ministries, Winter continues to work full-time at the company she founded. She admits even though she speaks publicly about HIV, she is still cautious about bringing up her status to new friends and potential business associates.

Ms. WINTER: Disclosure is really hard. It's still hard. I didn't let the business community know until last year that I was positive, because I felt it would affect my business.

LAWTON: Winter's health is relatively good, although she has to be monitored frequently to make sure the virus doesn't mutate or turn into AIDS.

Ms. WINTER: My immune system's strong. Can you imagine if it was down where a lot of people's are? It's just something that is, God willing, manageable. It's not an easy disease. You know, people say, "Oh, just take a few pills." Don't kid yourself. 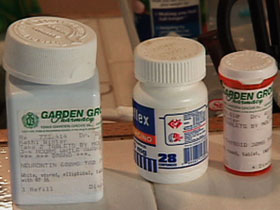 LAWTON: She tires easily and battles the many side effects of her meds.

Ms. WINTER: They make you sick, and oftentimes I have diarrhea or headaches. Some of the medicine makes you dizzy, you know. Some of them give you very vibrant dreams.

LAWTON: She says having HIV has brought her closer to God.

WINTER: I will tell you honestly I can't imagine living with the disease and not having a strong faith. I don't understand how people have hope. I don't know how they get through every day because he really is my sustainer. I mean, I just couldn't live if I didn't have the faith that I do. I just couldn't.

LAWTON: It's that faith, she says, which makes her grateful every day that she's alive.

Evangelical churches, both black and white, have long been accused of not doing enough to promote HIV/AIDS testing and awareness in their congregations. But Kathi Winter is one evangelical trying to change that. It’s a very personal crusade for her – she’s HIV positive.