BOB ABERNETHY, anchor: Now, the financial crisis: more failures, fears, realignment, layoffs on Wall Street, with consequences around the world. Is anyone to blame? We explore the ethical issues underlying the financial meltdown with Rebecca Blank, an economist, a senior fellow at the Brookings Institution, and co-author of the book “Is the Market Moral?” Dr. Blank, welcome.

ABERNETHY: So in the movie “Wall Street” we were told that “greed is good.” If that’s true, to what extent was greed responsible for all that’s happened?

Dr. BLANK: Greed is clearly partially responsible for where we are right now. But greed is good to most economists. It’s greed that makes people work harder, be more productive, and helps the economy grow.

ABERNETHY: Greed is good even though it’s a sin?

Dr. BLANK: Yeah, well greed has certain economic advantages. It’s hard for an economist not to say that. But there’s a level beyond which greed can go too far, and I, being greedy for more goods and to make another buck, can stop paying attention to the effects of my action on you, and that is when greed clearly becomes sinful even, I think, in the economic books and can lead to the sort of situation that we’re in right now. 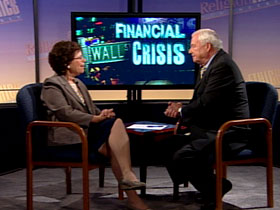 ABERNETHY: And that’s what happened in these cases. People were, traders were encouraged to take big risks and not pay attention to all the costs that there would be for people down the line if those risks didn’t pay off.

Dr. BLANK: That’s certainly true in part, but I will also say that there was also a culture where what those traders were doing was what everyone in all the cubicles next to them were doing. And, you know, there’s always the question of to what extent is that an excuse — and a justifiable excuse? There were also a lot of people at the very beginning of this, the whole sub-prime crisis that started this off, who saw themselves as providing more funds for low-income families. They were doing a good thing. So motives here are very mixed. I think it’s hard to say this is all about greed.

ABERNETHY: What about justice? Was there injustice involved?

Dr. BLANK: So, you know, we love a world in which the people in the white hats get rewarded, and the people in the black hats pay the price, and that I have to say doesn’t happen very often, particularly in a very complex economy. We’re in a time of panic right now where people have lost trust in what the banks are doing, what the investment firms are doing — lost trust beyond a level of reasonableness, to be honest, and it’s got to be stopped. And, you know, taking account of that fear and panic in many ways is more important than assigning blame one way or the other.

ABERNETHY: We all do want to assign blame, though.

ABERNETHY: We look for villains. Are there no villains in this? 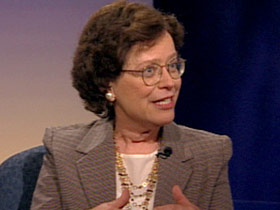 Dr. BLANK: Yes, I do think there are a few villains, but it’s probably too strong a word. There is, as you say, there are leadership particularly in some of these banks that were not open at all about what they were doing and how they were bundling . . .

ABERNETHY: Did they understand what they were doing? Is there a question of competence here?

Dr. BLANK: Well, that’s an open question. I think that is part of a question. There’s also a real question on the part of regulation. You know, there were no requirements here for greater openness and greater transparency, and of course that’s now what’s being called for. But that should have been called for long ago. And it is the role of government to create, if you will, responsible greed to keep boundaries around what people do.

ABERNETHY: Government perhaps, and how about the boards of directors and the people who are running some of these companies?

Dr. BLANK: No, I think there is certainly leadership questions here about competence and understanding and not paying attention to the risks that they were taking.

ABERNETHY: And trying to put some limit on the greed?

Dr. BLANK: Yeah. And of course if you ask these people three and four years ago how do you justify multimillion dollar salaries and huge bonuses, their answer would have been, “We are in a high-risk industry, so we deserve this.” Under those circumstances you then can’t feel very sorry when they lose at the other side of the risk. But, of course, there are a lot of people who weren’t in a high-risk industry who are also losing — the clerical people, the maintenance folks.

ABERNETHY: Rebecca Blank of the Brookings Institution, many thanks.

Pundits and the Pope