BOB ABERNETHY, anchor: Especially since 9/11, major Christian and Muslim scholars and religious officials have been working together to find ways believers in each religion can live side by side in peace. Next month at the Vatican, the pope is due to meet leading Muslims. This past summer, King Abdullah of Saudi Arabia sponsored an interfaith conference in Spain. More such conferences are scheduled in Britain, Jordan and Washington, D.C. And at Yale University recently there was a major week-long gathering of top Muslim and primarily Protestant leaders. 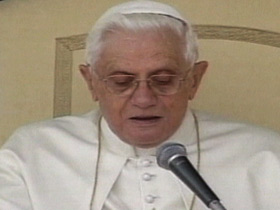 Nearly 150 Muslim and Christian scholars from 37 countries were invited to the Yale conference by its co-organizers, Professor Miroslav Volf of the Yale Divinity School and Prince Ghazi of Jordan, religious adviser to Jordan's king. What they called the "common word" that united them was love of God and love of neighbor. They also acknowledged their common fear of the catastrophe that could occur if Christians and Muslims, half the world's population, became enemies.

Professor MIROSLAV VOLF (Director, Center for Faith and Culture, Yale Divinity School): If we don't learn to live with one another we will not live. We will either love each other as neighbors or we won't be. I believe that it is an insult to me as a Christian to say that I cannot love as neighbor somebody who thinks differently than I do. Where did we ever get that idea?

ABERNETHY: The Christian and Muslim scholars spoke openly not only about the ideas they share but about their big, sometimes clashing differences, practical and theological, for instance over the nature of God. Muslims disagree strongly with the Christian doctrine of the Trinity -- God as Father, Son, and Holy Spirit.

Dr. SEYYED HOSSEIN NASR (University Professor of Islamic Studies, George Washington University): For Muslims, only God can be divine -- God in his oneness and his absoluteness and his not having anything like it. And that means that Islam opposes or even cannot understand the idea of certain Christians concerning the Trinity, in which really you have three divines. 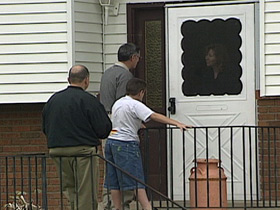 ABERNETHY: For Christians, terrorism is a major concern, but Volf notes that violent Islamic extremism is backed by only a very small minority of Muslims and that Christianity also has practiced violence.

Prof. VOLF: Incredible violence has been perpetrated in the name of Christian faith, even though love of God, love of neighbor are at the heart of that faith. I think something similar may be said of Islam as well.

Dr. NASR: That's a very, very major problem that cannot be overlooked and cannot be put in the closet. I think the evangelicals have to rethink this issue.

ABERNETHY: Leith Anderson, president of the National Association of Evangelicals, insists that evangelical Christians must share their faith. But he says they can do that respectfully.

LEITH ANDERSON (President, National Association of Evangelicals): We proclaim the good news of Jesus Christ, and we welcome the opportunity for people to believe. There's a difference between that and proselytizing, and in my definition proselytizing can be coercive. It can be manipulative. I don't think there is ever an excuse to be disrespectful to other people. 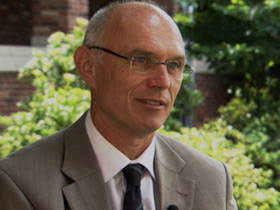 Prof. VOLF: If evangelism isn't an expression of love of neighbor it isn't Christian evangelizing, and love of neighbor includes not only what I say to the neighbor, but how I say that. I'm very hopeful, though it's a thorny and certainly an issue right now that tears the communities apart.

ABERNETHY: Many Muslim believers want to convert Christians to Islam.

ABERNETHY: And so do Christians?

Prof. VOLF: And so do Christians, exactly.

ABERNETHY: Many Muslim countries are closed to missionaries, a policy Christians see as a denial of religious liberty.

Prof. VOLF: Does a person have a right to change his or her own religion? This is a fundamental human right, just like a right to freedom of speech.

Prof. VOLF: I will tell you very -- quite honestly after my engagement with Muslim friends, I pray more than I used to pray. My prayer life has been enriched by my encounter with some Muslims, encouraged by their devotion and also enriched by the ways in which they pray. Have I compromised in this way at all? No. To the contrary, I've gone deeper in my faith, and I think my love for God has been deepened and made more intelligent in a sense, more rich by that very encounter.

ABERNETHY: As he helped close the conference, Volf returned to his view of what's at stake.

Prof. VOLF (speaking to conference participants): Either love or death -- when you think about it, this is the challenge that we face today. Let us learn to love all our neighbors and let us do that in the name of our common future and in the name of our one God. 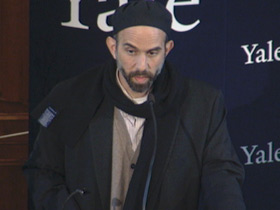 ABERNETHY: Prince Ghazi read the final conference document, affirming, among other points, that God is absolute, his love infinite; and that everyone has a right to the preservation of life, dignity, and religion.

Prince GHAZI (Special Advisor to H.M. King Abdullah II, Jordan, speaking to conference participants): Have we anybody who will not sign his name to this, of the participants?

ABERNETHY: No one spoke.

ABERNETHY: None of the participants claimed resolution of their differences. But, in Prince Ghazi's words, they hoped their joint commitment to loving God and neighbor will help all religions heal, not wound.

Following the events of September 11th, major Christian and Muslim scholars and religious officials have been working together to find ways believers in each religion can live side by side in peace.

Religion and Peace in the Middle East