BOB ABERNETHY, Anchor: After decades of debate and division, the US Episcopal Church this week said overwhelmingly that gays and lesbians are eligible to become bishops or serve in any other ordained ministry of the church. At their General Convention, Episcopal leaders also moved toward developing an official rite for blessing same-sex unions. These decisions are likely to widen the divide between Episcopalians and the worldwide 77-million-member Anglican Communion of which they are a part. Kim Lawton has our special report from Anaheim, California. 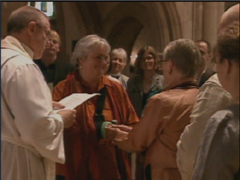 KIM LAWTON: At their meeting in Anaheim this week, Episcopal bishops, clergy, and lay representatives tackled a host of social issues, from global poverty to justice for Disneyland hotel workers. But the most divisive topic, once again, was homosexuality.

REV. IAN DOUGLAS (Episcopal Divinity School): It wouldn’t be a meeting of the Episcopal Church or the Anglican Communion if we didn’t somehow engage matters of human sexuality.

LAWTON: Despite concerns from many global Anglican partners, convention delegates overwhelmingly voted to move ahead on two of the most contentious questions: whether to ordain gay bishops and whether to bless same-sex unions. On the issue of gay bishops, the delegates asserted that “God has called and may call gays and lesbians to any ordained ministry in the Episcopal Church.” The vote effectively ends a de facto moratorium that was approved three years ago, although it does not guarantee that more gay bishops will be consecrated.

Separately, the delegates also voted to move forward in developing liturgies for blessing same-sex relationships. The issue will be taken up again at the next General Convention in 2012. In the meantime, the measure allows local clergy leeway in blessing same-gender relationships, especially in states where gay marriage is legal.

Reverend Susan Russell is the outgoing president of Integrity, a group that works for the full inclusion of gays, lesbians, bisexuals, and transgendered people in the Episcopal Church.

REV. SUSAN RUSSELL (Integrity): I think the overwhelming message coming out of this convention, not only for LGBT people but for all who are looking for a community that that embraces peace, justice, tolerance, compassion, and the good news of God in Christ Jesus, is that the Episcopal Church welcomes you.

LAWTON: The measures passed in part because many conservative Episcopalians have left the denomination. Those remaining feel increasingly isolated. 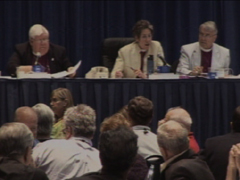 BISHOP WILLIAM LOVE (Diocese of Albany, at press conference): It is very sad for me because I am a lifelong Episcopalian, I’m a lifelong Anglican, but first and foremost I am a lifelong Christian, and it is breaking my heart to see the church destroying itself in the manner in which we seem to be doing.

LAWTON: Many delegates here said they voted for the direction they believe God is calling their church to go in. But those votes pose new challenges for a global Communion that has already been strained close to a breaking point. There’s a lot riding on how what happened here gets interpreted around the world.

Many Anglicans, especially in Africa, Asia, and South America, were outraged in 2003 when the Episcopal Church approved the consecration of New Hampshire Bishop Gene Robinson, the church’s first openly gay bishop. An emergency Communion report called on the US to ban on any future consecrations of gay bishops until an international consensus emerges.

ARCHBISHOP ROWAN WILLIAMS: Along with many in the Communion, I hope and pray that there won’t be decisions in the coming days that could push us further apart.

LAWTON: Much of this week’s debate centered on balancing Communion concerns with a desire to move forward.

BISHOP SHANNON JOHNSTON: The Communion, for me, is too much to lose. There is too much at stake with mission and our ability to apprehend larger, wider truths that go way beyond our own small church and setting in the Western world. 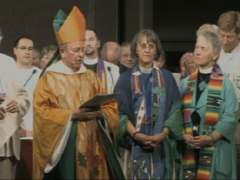 LAWTON: Shannon Johnston, coadjutor bishop in the Diocese of Virginia, said he personally supported the gay ordination resolution, but voted against it because he didn’t want to further divide the Communion.

JOHNSTON (Diocese of Virginia): It was quite wrenching, because it took two of the core values of the church and juxtaposed them against each other, mission and inclusivity on the one hand and then the unity of the church on the other, which is no less a core value of the Gospel.

BISHOP KATHARINE JEFFERTS SCHORI: Schism is not a Christian act.

LAWTON: The approved resolutions reasserted the Episcopal Church’s desire to remain an active member of the Anglican Communion. But Bishop Jon Bruno of the Diocese of Los Angeles says that doesn’t mean total agreement with overseas churches about homosexuality.

BISHOP JON BRUNO (Diocese of Los Angeles): I think I would explain it to them that the context that we live in is totally different and that they have to be tolerant of our context as well as we are tolerant of their context. I still want to be in relationship with them fully.

LAWTON: Reverend Ian Douglas, a representative from Massachusetts, described the votes as being honest with the rest of the world about what the Episcopal Church stands for.

BISHOP DAVID ANDERSON (American Anglican Council): I think it signals to the rest of the Communion, the Anglican Communion, that the Episcopal Church wants to be a member only on its own terms, and that if terms are applied to it, then they will go their own way and have things the way they wish, and others can be with them or not.

LAWTON: David Anderson is among the Episcopalians who left the denomination over theological issues. He was ordained a bishop in the Anglican Church of Kenya. Disaffected Episcopalians, including four breakaway dioceses, have formed a rival jurisdiction called the Anglican Church in North America. They’re seeking recognition from the Archbishop of Canterbury.

ANDERSON: I see that as The Episcopal Church continues to go through these earthquakes of adopting things there is going to be a constant stream of both people and churches, perhaps more dioceses, that wind up leaving and coming over into the rest of the Anglican Communion.

LAWTON: But at the same time, many Episcopalians believe their actions here will help bring in other people who may have felt alienated in the past. Both sides say they’re anxious to focus on mission rather than division. I’m Kim Lawton in Anaheim, California.