DEBORAH POTTER, guest anchor: What role does faith play in a delivery room? If you ask one doctor in Atlanta, the answer is a big role. Dr. Joseph Tate delivers babies the old-fashioned way, using methods some obstetricians call risky. But his patients say God guides his hands. Mary Alice Williams has our report.

MARY ALICE WILLIAMS: Babies always surprise you, and most expectant mothers hoping for this joy, and chaos, fully expect to deliver a healthy baby — naturally.

WILLIAMS: The birth of Sarah Miller’s two daughters surprised her and her husband Bill. She was unable to dilate enough to allow for natural birth. They were delivered by cesarean section. 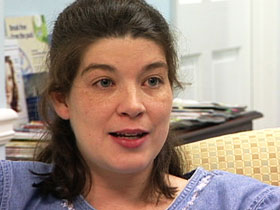 SARAH MILLER: It makes it very hard to breast-feed. It makes it hard to do anything and bond with the baby, and I just want a vaginal birth.

UNIDENTIFED BIRTH HELPER (to patient): This baby is so good.

WILLIAMS: Vaginal birth after c-section — or VBAC — carries a rare but real risk of uterine rupture, life-threatening to both mother and child. Most obstetricians won’t risk it.

WILLIAMS: Dr. Joseph Tate risks VBACs all the time, even when the odds are against him.

Dr. TATE: I didn't say to Sarah — I could say to her, “Look, you had two shots at it, and you didn't perform. Tough. I'm going to do a cesarean.” I got to look at it positively. I will give her a fair shot at it, as long as she and the baby are doing well. That's always the bottom line.

WILLIAMS: Dr. Tate, known as “Doc T,” is the sole practitioner of DeKalb-Gwinnett OB/GYN in Atlanta. It’s a family business. His wife Phyllis and daughter Elizabeth work in the office. He hasn’t had a vacation in 13 years because he works a super-human schedule.

WILLIAMS: Orthodox Jewish women make up about 20 percent of Dr. Tate’s practice. The rest are women of all faiths. How many babies has he delivered?

WILLIAMS: Sarah and Bill are hoping to make it five thousand and one.

Ms. MILLER: Well, I'm connected with a lot of mother groups online, and basically Dr. Tate's name comes up over and over again, because there is nobody else. 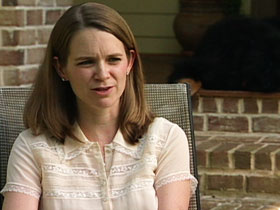 KATE SANDHAUS: Doc T is the only actual OB who participates. This is a one-in-a- million doctor. This is not just any doctor.

WILLIAMS: Kate Sandhaus, just three weeks before delivering her second child, arrived on Doctor Tate’s doorstep desperate for a VBAC after her first was born by a frightening emergency c-section. Doc T agreed to help her.

Ms. SANDHAUS: He’s available to all of us in a way that — I just — I don't know any other doctors like that. I think that Doc T is committed to doing what's right. He's not swayed by what's convenient, and the reason he practices medicine the way he does is because of his faith.

WILLIAMS: Doc T is an Orthodox Jew, a faith that requires of men many obligations, including praying three times a day. 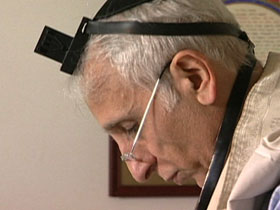 Dr. TATE: It's a communication with God. Judaism is establishing your own relationship with God. It's a personal relationship. We don't believe that God just kind of sets things out here and then you willy-nilly go your own way. We believe he does take a personal interest.

WILLIAMS: Dr. Tate is a pillar of the men’s study group at Beth Jacob synagogue in Atlanta. His rabbi, Ilan Feldman, calls him his go-to guy and a stickler when establishing the religious calendar.

Rabbi ILAN FELDMAN (Congregation Beth Jacob, Atlanta, GA): He's got a clock which is connected to Pueblo, Colorado, an atomic clock because he's that precise, and no matter what the synagogue clock says, when his clock says it's time to begin, we begin.

WILLIAMS: On the Sabbath and high holidays Orthodox Jews may not carry things outside the home. So Doc T, a crack engineer long before he was called to obstetrics, constructed an eruv — a religious boundary that binds the entire community into one household.

Rabbi FELDMAN: So that for the purposes of Jewish law, an individual would be able to carry or transport items outdoors on the Sabbath on Shabbat.

WILLIAMS: As for Dr. Tate using his cell phone and delivering babies on the Sabbath, Jewish law makes exceptions.

Rabbi FELDMAN: Jewish law does have adjustments, so to speak, for people who are serving matters of life and death, and certainly a medical doctor like Dr. Tate would be governed by that exception. 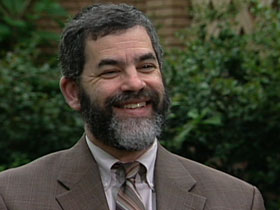 (to Rabbi Feldman): Do you suspect that his Judaism makes him a better doctor?

Rabbi FELDMAN: There's no question about it. In my opinion, the defining quality of a doctor beyond his training and his intelligence is his humility, and Dr. Tate is devoted and humbly in the service of his patients and of their Creator.

MICHELLE FRANK: People all around America, especially in the Orthodox Jewish community, really know about him — just a great asset to us.

WILLIAMS: Michelle Frank belongs to Dr. Tate’s synagogue. Three years ago in New York — with 26 people descending for Passover Seder — she went into premature labor. Rachel was born by cesarean.

Ms. FRANK: Physically it was really atrocious. I actually couldn't even sit up for about 36 hours after she was born. It was just excruciatingly painful.

WILLIAMS: She’d been assured delivering naturally the next time would be no problem. She was in for a shock, as are many women in her circumstances.

Ms. FRANK: They're absolutely not getting to do it. You have major hospitals in Atlanta who deliver, say, 16,000 babies a year, and they have c-section rates close to 40 percent.

WILLIAMS: Nationally, more than 9 out of 10 births following a c-section are surgical deliveries. Emory University Hospital Midtown, where Dr. Tate delivers, supports VBACs. But studies show more than a quarter of hospitals don’t or if they do can’t find doctors to perform them. Dr. T delivered Michelle’s new baby Danielle by VBAC. 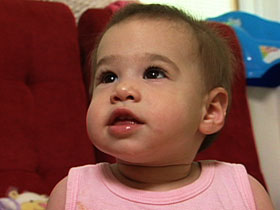 Ms. FRANK: You're on cloud nine. It's so unbelievably amazing. It's just the way that a woman was made to deliver a baby.

WILLIAMS: (to Ms. Frank): Do you think that his Orthodox Jewish faith makes him a better doctor?

Ms. FRANK: I think it makes him a better doctor, because I think that it helps to instill a lot of confidence in him. He does things that no other obstetrician will do. Whether they can or can't they just won't, and he'll tell you that he really feels like God just sort of guides his hands in his deliveries, and some of the things that he does, and some of the stories that have been told, there's just no way to do that on your own. I mean, you have to have help, and he attributes that help to God.

Dr. TATE: When you understand that there is another power in the world, and it is not just about you, then God gives you the ability sometimes to do things beyond what you particularly can do.

WILLIAMS: Natural births mean less blood loss and risk of infection for the mother and fewer respiratory problems for the newborn. But on this Sabbath day, there’s a problem with Sarah. Her tailbone is blocking her baby’s birth.

Dr. TATE: What I don't tell people always is when I'm in tough situation I'll close my eyes and I'll say a silent prayer, and I want Him to let me know if this is something that can be done, let me do it, let me do it well. But if it's something that can't be done, well, let me know, and if I need to do a cesarean to—that's the right thing, then we'll do that. I need help, and I’m not ashamed to ask for it.

Ms. MILLER: Thank you so much.

WILLIAMS: And before you know it, this tiny newborn will join this crowd — every one of whom was delivered by Dr. Tate.