KIM LAWTON, correspondent: In Jerusalem’s Old City, the Spafford Children’s Center is a welcome oasis from the turbulence that is all too present here. Both Israelis and Palestinians claim Jerusalem as their capital, and the ongoing conflict can take a heavy toll on the city’s children. Located in the Arab section of Jerusalem, the Spafford Children’s Center tries to help Muslim and Christian Palestinian kids deal with the trauma.

DR. JANTIEN DAJANI (Spafford Children’s Center CEO): I always say there is hardly anyone in the Palestinian society that is not traumatized. 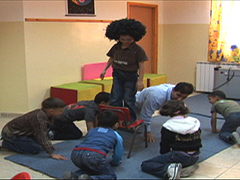 LAWTON: The center is run by Dr. Jantien Dajani, a Dutch pediatrician who came here 35 years ago. Back then, the center provided medical services for East Jerusalem’s children, as it had since the 1920’s. But center leaders realized they were dealing with problems that went beyond the physical. David duPlantier, dean of Christ Church Episcopal Cathedral in New Orleans, is on the Spafford Children’s Center board.

REV. DAVID DUPLANTIER (Spafford Children’s Center Board Member): So it was a chance to really strengthen the health of the children, not just in the medical sense, but in the psychological and social sense.

LAWTON: About 400 children up to age 18 come through the center every week for after-school activities and Friday sessions. The center also sponsors summer camps and special cultural programs. The children learn skills to help them in future jobs, things like computer and English. Everything has an educational component, even the most uproarious game. There’s play therapy, art therapy, and drama therapy, all designed to help the children deal with trauma and stress they may not even realize they have. A psychologist comes in several times a week for one-on-one sessions, and there is also group counseling.

Dr. DAJANI: And what we try to do is to create in the center several safe areas, safe rooms where they can say anything, and it will not come back to them.

LAWTON: Dajani’s philosophy is to keep the kids busy with positive activities so they won’t get pulled into drug abuse or violence, common problems among Palestinian youths. She tries to teach them to make the best of their circumstances, no matter how difficult those circumstances are.

Dr. DAJANI: I always say I cannot change for you the situation we are living in. That’s impossible. That needs political solutions from high up. But at least what I can try is to change a bit your perception of the situation.

LAWTON: The center itself has a colorful past, tracing its roots to Horatio and Anna Spafford, an evangelical couple from Chicago. After suffering heavy losses in that city’s Great Fire of 1871, Horatio sent Anna and their four daughters to Europe. While en route their steamship, the Ville du Havre, sank after colliding with another ship.

Rev. DUPLANTIER: Before the Titanic, I think it was the most significant cruise ship disaster, and the daughters all perished. 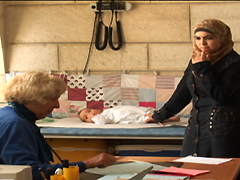 LAWTON: Anna sent Horatio a telegram which said, “Saved alone. What shall I do?”

Rev. DUPLANTIER: He’s heartbroken to find out his daughters have perished, and so he takes a boat over to meet Anna, and when the captain shows him roughly the place where the shipwreck had taken place, he was inspired to write a poem that later became the hymn “It Is Well With My Soul.”

LAWTON: “It is Well” remains one of the most popular Christian hymns, sung in churches around the world and recorded by multiple gospel artists.

LAWTON: After their tragedies, the Spaffords decided to move to the Holy Land. They believed the end of the world was near and that Jesus would soon come back to Earth on Jerusalem’s Mount of Olives. The Spaffords and a small group of fellow believers called the Overcomers wanted to be close by when that happened. As they waited, they established a commune in East Jerusalem that became known as the American Colony.

Rev. DUPLANTIER: They weren’t there to try to convert people. That was one of the unique things about them. They didn’t proselytize. They said their prayers, they welcomed people, they offered food when they had it. But they were not there to try to convert other people, which was very different than especially evangelical Christianity in that period.

LAWTON: The American Colony eventually moved to the former palace of an Arab pasha. Jews, Christians and Muslims were all welcome there.

Rev. DUPLANTIER: From the absolute beginning they were generous, they were known to share their food. They really were thought to be a place of hospitality and, you know, Christianity at its core, it really is a faith of hospitality.

LAWTON: But there was also controversy. After Horatio died in 1888, Anna took over leadership of the colony. Her style was authoritarian, and she imposed a rigid set of rules. 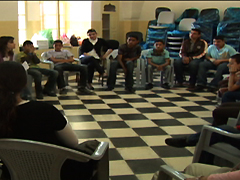 Rev. DUPLANTIER: She kind of dictated how life would be. Certainly they were unique and different than mainline Christianity of today in how they lived. They were very disciplined. There was a period of time where men and women, even if they were married, apparently lived separately.

LAWTON: DuPlantier says after Anna died in 1923 the religious zeal of the colony changed.

Rev. DUPLANTIER: In any kind of community like that it’s always going to be a challenge to sustain that over a period of time. So I think partly that’s why the religious fervor fell away in the next generation, because you know it was very much based around the personal faith of Anna and Horatio.

LAWTON: But the charitable work of the colony continued. Anna’s daughter Bertha focused on caring for children.

Rev. DUPLANTIER: That began kind of the ministry that evolved, from taking in orphans to helping with health care and, you know, over a period of time turned into a hospital and then evolved over time into the Spafford Center as it is now.

LAWTON: The Spaffords’ compound has become the famous American Colony Hotel, which has been named one of the leading small hotels of the world. The hotel provides key support to the children’s center. The Spafford Children’s Center is just inside the walls of Jerusalem’s Old City near the Damascus Gate. It’s in the house where Horatio and Anna Spafford settled after they arrived here from Chicago in 1881. The house eventually became the headquarters for the Spafford family’s charitable works. Today, the center is not explicitly religious, although it has many faith-based connections. Dr. Dajani says, like their predecessors, they serve people of all faiths, and they try to teach the children religious tolerance.

LAWTON: For duPlantier, the lasting legacy of the colony is the joy he sees in the children who come to the center, a testament of hope, he says, that turmoil and tragedy need not prevail.

Rev. DUPLANTIER: To see the joy that is just prevalent in the folks really has renewed and continues to renew my knowledge that God finds a way. No matter what circumstances we find ourselves in, God finds a way to redeem them if we look.

LAWTON: And that, he says, makes things well with his soul.

AMERICAN PRIESTESS: THE EXTRAORDINARY STORY OF ANNA SPAFFORD AND THE AMERICAN COLONY IN JERUSALEM by Jane Fletcher Geniesse