Senate Democrats invited religion reporters to the Capitol on October 21—no  cameras were allowed—to talk about “the moral imperatives of health care and climate change.” The session was organized by the Democratic Steering and Outreach Committee as part of an ongoing Democratic effort to reach out to faith groups. Eight Democratic senators pleaded for bipartisanship and teamwork in the face of Republican filibusters of bills, nominations, and other legislative initiatives that are not moving ahead on the Senate floor, and Senate Majority Leader Harry Reid of Nevada asked faith communities to “speak out against obstructions.” 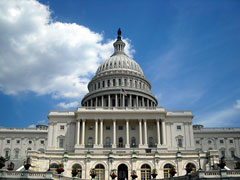 The procedural frustrations of the Democrats were obvious. Florida Senator Bill Nelson compared the US unfavorably to the African nation of Rwanda, where he said “forgiveness and reconciliation” overcame political differences and genocide. “Where do you observe reconciliation in American politics today?” Nelson asked.

“I don’t usually talk about moral issues, but you do,” Senator Barbara Boxer of California told reporters. “If ever the religious community should speak with one voice,” she suggested, it is now, as “great moral questions” dominate the legislative agenda. Boxer chairs the Senate Committee on Environment and Public Works, which holds hearings next week (October 27-29) on energy legislation introduced last month by Boxer and Massachusetts Senator John Kerry. Religious leaders will be among those who testify, said Boxer.

Pennsylvania Senator Bob Casey, a pro-life Catholic, said “we’re working on it” when asked about abortion coverage in the Senate health reform bill and whether he would vote against reform if the final bill doesn’t explicitly prevent federal funds from being used for abortion. “The bill needs more work done,” he said. But Senator Stabenow told reporters Casey was “not going to have to make that choice” because “we don’t have public funding for abortion,” and the Democrats “have gone to great lengths to make it [the bill] abortion neutral.” Some abortion opponents, however, believe otherwise.  The US Catholic bishops, longtime advocates of universal health coverage, said last week they do not yet support the Senate bill because of their concerns about affordability, coverage for immigrants, and financing for abortion. As for Democratic outreach to the bishops, “we are communicating with them as we have been,” said Stabenow.

Stabenow asked faith groups to help legislators get “past the noise” and “beyond the rancor” and “call us to a higher moral authority.” If they don’t take up the cause of health care reform, said Maryland Senator Ben Cardin, religious communities will be called on to do more than they already do to meet the needs of the elderly, the poor, and the disabled. “I talk about this as a moral issue all the time,” said Cardin. “That is very much what this debate is all about.”