BOB ABERNETHY, anchor: In the wake of the failed Christmas Day airplane bombing, the Obama Administration took new steps this week to improve airline security. President Obama ordered US agencies to move faster and more accurately to prevent future terrorist attacks. He said while the vast majority of Muslims reject al-Qaeda, the US must develop a strategy that addresses the challenges posed by lone recruits. Under new TSA [Transportation Security Administration] procedures, passengers traveling from 14 nations, most of them predominantly Muslim, are facing enhanced screenings. Many American Muslim groups say while they are concerned about security, they are still worried that their community is being unfairly targeted by what they call “religious profiling.” 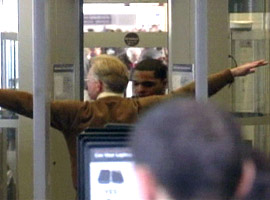 SALAM AL-MARAYATI: Nothing wrong with tougher airline security, but when we stigmatize and profile a population, that divides our country, making it more difficult to counter the threat. We have to be united against extremism and united against hate.

ABERNETHY: Well, for instance, are head scarves a problem? Shouldn’t—and certainly somebody who, a lone guy gets on an airplane and pays cash for a one way ticket, shouldn’t those things raise alarms?

AL-MARAYATI: There’s a difference between behavior profiling and religious profiling. If someone buys a one-way ticket with cash only without baggage, flying from Africa or Asia to the United States, of course that should raise suspicions. But going after women with head scarves is ineffective.

ABERNETHY: So are you saying that you and other Muslim leaders come down more on the side of individual freedom that you do on security?

AL-MARAYATI: No I think we have to have both. If you are going to stigmatize or isolate a population, that feeds into radicalization. Part of the radicalization problem is when a community feels isolated, and when one person—and we’re talking about now the concern over lone wolves or lone recruits, if that person feels desperate, depressed, then he becomes prey for extremist recruiters, and we should do anything and everything to help accelerate integration of Muslims into American society.

ABERNETHY: After the Christmas Day near-disaster in the air near Detroit, and some other recent events, too, do you sense a growing backlash against Muslims in this country? 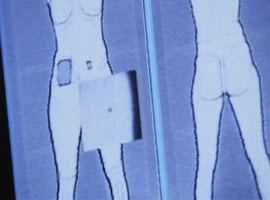 AL-MARAYATI: There’s a rise of the mob mentality. You read the comments on a number of stories, you get the emails, you get the phone calls, and I feel, unfortunately, that the level of hostility against Islam and Muslims is at an all-time high, and I’m very concerned.

ABERNETHY: Many Americans think that Muslims leaders in this country and in the Middle East should be doing a lot more to combat and condemn the interpretation of Islam that is so popular among many young radical extremists. Do you agree with that?

AL-MARAYATI: Well, I think that we as Muslims have done a lot in terms of the message against extremism. Our problem is that we have not been able to develop an effective way to get the message out. We don’t have the capacity in terms of public relations, if you will, in terms of making our message of moderation more newsworthy than the sensationalist message of extremism.

ABERNETHY: Do you think there is a role for the Unites States government in combating the ideology of radical Islam?

AL-MARAYATI: The Unites States government will not be able to defeat ideology of radicalism. It needs the Muslim American community in partnership, for those people unfortunately who are being recruited by extremists, they don’t regard the United States government as an authority, but they regard Muslim leaders as authorities. So it is our task, Muslims, who will help win the victory against radicalism and extremism

ABERNETHY: Many thanks to Salam Al-Marayati of the Muslim Public Affairs Council.