BETTY ROLLIN, correspondent: The music—the joy—the hats! All are in evidence every Sunday morning at the Victory Temple in Bowie, Maryland, one of 400 Redeemed Christian Churches of God in North America. Today’s sermon by Pastor Bayo Adeyokunnu is about money.

PASTOR BAYO ADEYOKUNNU (Victory Temple in Bowie, Maryland): You must have a savings account, no matter how much you are making, and this can come through so many areas: money market, mutual funds, savings accounts, 401K…Amen.

ROLLIN: Congregant Theresa Norton, a school teacher, used to attend a Catholic church. She prefers this church’s emphasis on the Bible and on practical matters as well.

THERESA NORTON: I’m really making money because of what the pastor is always telling us. You know, even if you have your job that you’re doing, you need to have something by the side.

ROLLIN: Like all of the pastors of the Redeemed Church, Pastor Adeyokunnu has great ambitions for his church. 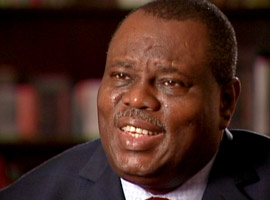 PASTOR ADEYOKUNNU: Our goal is to do everything possible to win souls for the kingdom of God. After they are won then we teach them, we disciple them how to make a living, how to benefit the society, how to make a difference within their community.

ROLLIN: And the Victory Temple’s goal is to grow. They’ve already established 15 churches in this part of Maryland, mostly attended by their fellow Africans. A good start, they say.

PASTOR ADEYOKUNNU: We want to start churches, if possible, like Starbucks.

PASTOR ADEYOKUNNU: This Bowie church is located in the African-American community, so we are trying to attract people within this community, and very soon we are going to reach out to the whites within the neighborhood.

ROLLIN: You will be reaching out to whites as well. 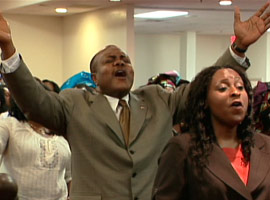 ROLLIN: Why do you want to do that?

PASTOR ADEYOKUNNU: Because Christ died for everybody.

ROLLIN: So speaks the revered and powerful leader of the global church, Pastor Enoch Adeboye, a former math professor in Nigeria. Called the General Overseer, Adeboye is the man in charge. He sees his role as restoring Christianity and morality to America and the rest of the world. One of his emissaries, who attended this yearly meeting of pastors, is Daniel Ajayi-Adeniran. His assignment is church expansion.

PASTOR DANIEL AJAYI-ADENIRAN: In every household there will be at least one member of Redeemed Christian Church of God in the whole world.

ROLLIN: Every family in America?

PASTOR AJAYI-ADENIRAN: In the whole world. Not only in America, in the entire universe.

ROLLIN: And Who is telling you this? Who is setting these goals?

PASTOR AJAYI-ADENIRAN: It is our leader, the General Overseer. 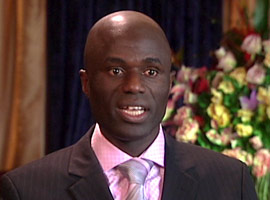 ROLLIN: And who is setting his goals?

ROLLIN: And they believe it was God who directed Pastor Enoch Adeboye to gather in this remote place northeast of Dallas. Here at headquarters in Floyd, Texas, population 220, the church has bought 550 acres of land. Plans include building a school, perhaps a college, and an auditorium that will seat 20,000 people.

PASTOR AJAYI-ADENIRAN: I believe God takes special interest in this country. God will not allow America to drown, to be destroyed, because this country has been a great helper, a blessing to the entire universe, including people like me.

ROLLIN: But you think we are drowning now?

PASTOR AJAYI-ADENIRAN: Yes. There is no family value anymore. Before it used to be family values, but it is no more. Our teenagers, they just doing whatever they like. No fear of God.

ROLLIN: So you are helping us?

PASTOR AJAYI-ADENIRAN: We are working together for God’s will to come to pass, and we will do our best.

ROLLIN: Dana Robert is a professor of world Christianity and mission theology at Boston University. She attributes the remarkable growth of the Redeemed Christian Church of God to a demographic shift in Christianity worldwide. 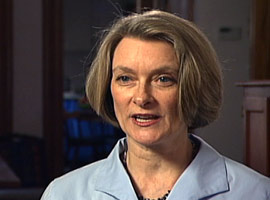 PROFESSOR DANA ROBERT (Boston University School of Theology): Now there are over 450 million Christians in Africa. A century ago, there were only eight million, so the huge growth of Christianity in Africa and Latin America and parts of Asia means that when they come here they think of themselves as missionaries.

ROLLIN: Professor Robert says immigrants have always brought their religions with them, but few have expanded as much as Nigerians have.

PROF. ROBERT: They come from a huge, overcrowded English-speaking country, so they can land with their feet on the ground and get up and running with outreach, churches, building schools, building homes very quickly. They don’t have the language barrier that a lot of the other immigrants have when they get to the United States.

ROLLIN: In addition, Professor Robert says, people are attracted to the Pentecostal style of worship.

PROF. ROBERT: Pentecostalism has swept all over the world in the last several decades, so the immediacy of the supernatural, the emotional worship style, the focus on lifestyle and holiness—these are things that American churches has gotten soft on.

ROLLIN: Speaking in tongues which is a way of praying and, some say, a sign of God’s grace also has an appeal. 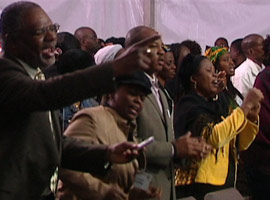 PROF. ROBERT: You enter not quite an altered state of consciousness but you’re suspending your rational mind and just letting your tongue loose. By releasing your conscious mind, it lets mystery flow into you.

ROLLIN: Nigerians also emphasize healing as a part of their service.

PASTOR AJAYI-ADENIRAN: I believe in the healing power of God. I don’t use medication. If for any reason I’m sick, I don’t go to hospital. I pray to my God because he created me. God manufactured me. If anything is wrong with me he knows how to repair and fix me up.

ROLLIN: Like many conservative Christian churches, when it comes to issues like homosexuality the Redeemed Church believes the Bible forbids it.

ROLLIN: The church believes that homosexuality, as well as other kinds of behavior they consider immoral, is the work of the devil.

ROLLIN: Professor Robert says that the most negative reaction to African churches comes from African Americans.

PROF. ROBERT: So you see you get Africans coming in with no racial chip on their shoulder living alongside and competing with African Americans who’ve got the weight of their communal history that in some respects is dragging them down, and there’s tension right on the ground.

ROLLIN: Numbers matter, and there’s no doubt that the number of Redeemed Christian Churches of God has grown, and clearly the leaders have the desire, the energy, and the money to keep growing. But so far they are mainly reaching fellow Africans, so their challenge is to reach beyond their base.