FRED DE SAM LAZARO, correspondent: The church is carved out of El Mokattam or the mountain, a giant bluff just outside Cairo. Egypt’s Coptic Church is one of Christianity’s earliest, brought here by Mark, writer of the oldest New Testament gospel. The liturgy closely resembles those seen in other Eastern Orthodox churches, though the Copts’ leader, or pope, has always been based in Egypt. This church was actually built in the 1990s, a tribute to its ancient heritage, modern engineering, and the affluence of some in Egypt’s Coptic minority. But that wealth is in small pockets of Egypt’s upper class and a Copt diaspora in rich countries. Most of Egypt’s Copts live in poverty, sometimes dire poverty. Surrounding this church is one of Cairo’s poorest neighborhoods called Medina Zabaleen, literally “Trash City.” For decades, the zabaleen, or trash collectors, have gone door to door and hauled home what the people of Cairo threw away. They aren’t paid for this. Their entire income comes from recycling. They’ve been uprooted repeatedly as the city has grown and, activist Laila Iskander says, only grudgingly tolerated. 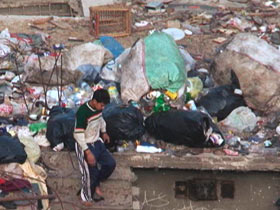 LAILA ISKANDER: The government realized, well, if we evict these people from here and tell them to vanish, who’s going to service the city? So there was always this recognition that these people were important, but we don’t like them. Five evictions later, into the ’70s, they figured there’s going to be a sixth eviction, it’s too easy, and the city will grow and catch up with us. Let’s go into the belly of the mountain, this limestone rock here, and they did that.

DE SAM LAZARO: Copts make up about 10 percent of Egypt’s population, and many say Zabaleen City is a metaphor for their struggle in this predominantly Muslim country, a struggle to preserve traditions and livelihoods, both of which, they say are imperiled by Egypt’s growing religious conservatism and by government policies. In 2009, the Egyptian government, responding to the swine flu epidemic, ordered all pigs killed in the country. Some 300,000 of the animals were culled. Pigs are considered unclean in Islam, but the Christian Zabaleen were suddenly deprived of a source of both income and protein, and health experts agree the animals were never a flu threat.

DE SAM LAZARO: Author and democracy activist Alaa Al Aswany also blames poor governance for Egypt’s persistent poverty. He says the resulting frustration has often fueled sectarian tension, and beginning in the 1970s so has a steady rise in the Wahabi brand of religious conservatism, imported and financed from Saudi Arabia. 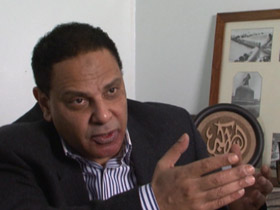 DE SAM LAZARO: Egyptians who grew up in the 50s and 60s see the growing influence of Wahabism. Most Egyptian women cover their hair today, and growing numbers don the niqab, covering all but their eyes. It’s evident even in cemeteries like this one, where you can see disagreement over allowing inscriptions on tombstones.

AHMED THARWAT (reading inscription): This is “the most merciful” whatever, and then somebody says we’re not supposed to do that, he wipes it, and you actually see the culture clashing in print, right before your eyes.

DE SAM LAZARO: Ahmed Tharwat has lived in Minnesota for 25 years, where he hosts a TV show for the region’s Arab-American community. He recently visited the Nile Delta village where he lived in as a young man.

THARWAT: This is all Muslims, this all, as you can see, all Muslim in this section.

DE SAM LAZARO: He says one Christian family lived in the village. But there was no Christian cemetery nearby, so they’re buried alongside Muslim neighbors. This departure from custom prompted some debate, but it was resolved by community leaders. 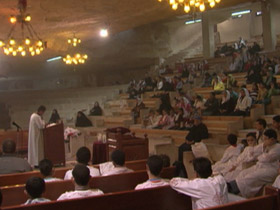 THARWAT: I remember when the neighbor, my uncle said he didn’t hurt us when he was alive, why would he hurt us when he dies? And I think it really sums up the whole story.

DE SAM LAZARO: But some say that kind of acceptance has given way to much more awareness of a religious divide—and tension.

PROFESSOR REFAT LAKOUSHA (Alexandria University, speaking through translator): You will always find a religious interpretation of any conflict between Coptics and Muslims because we live in an era of tension between the religions that I’ve never seen registered at this level, and that’s why in any conflicts between Muslims and Coptics, in the subway or the market, it will always end up being taken in the religious context.

DE SAM LAZARO: The most violent recent example occurred in southern Egypt outside a Coptic church on the Orthodox Christmas Day. Six worshippers and a Muslim security were gunned down. The killings were apparently retaliation for the alleged rape of a Muslim girl by a Christian man. There were riots and clashes with police during the funerals.

ASWANY: This intolerance has been existing in the society because of the Wahabi people, but also it has been transmitted as an infection to the other side, so you have also some Coptic fanatics, and you have also Coptic channels who are trying to make the point that the religion of Islam is a whole bunch of nonsense. 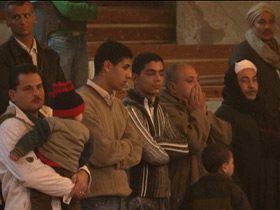 DE SAM LAZARO: In the end, religious leaders from both communities tried to bring calm after the Christmas shootings. Copts and Muslims have lived side by side for centuries, with occasional spasms of sectarian violence. The key question is: are things different this time? Will the current tension escalate into an enduring religious conflict?  Author Aswany thinks it’s not in the Egyptian character.

ASWANY: It could be repeated, but I don’t think this is an opening of an era of killing in Egypt, because as I said, the Egyptian culture, which is very old and very civilized, will never tolerate it. So we have had before, you see—probably this is one positive aspect to be belonging to a country which has been existing for 60 centuries, 6000 years, because everything you are having now you will discover that it happened before many times.

MANSOUR KHADDIS (speaking through translator): And we wish the government and society in general would recognize that we are a vibrant community, not just “the trash people.”

DE SAM LAZARO: Back in Medina Zabaleen, church elders say they can only hope the historic tolerance prevails in Egypt, a society that may not have fully embraced the Copts, but one that nonetheless recognized their citizenship as one of Egypt’s ancient, original people.

For Religion & Ethics NewsWeekly, this is Fred De Sam Lazaro in Cairo, Egypt.