LUCKY SEVERSON, correspondent: Sunday Mass at St. James Cathedral in Seattle, where attendance has actually been growing, defying a national trend of fewer people attending church. Sister Joyce Cox, a Catholic scholar and spiritual director for the Seattle diocese, says a survey in a book called “The None Zone” found that people in the Pacific Northwest are less religious than the national average.

SISTER JOYCE COX: The first question was do you have any faith or church that you follow or you participate in? And the answer was “none.” So 67 percent of those who answered answered none, but they still claimed in other questions that they believed in God and that they were spiritual.

SEVERSON: That’s the good news: an increasing number of Americans say they are searching for spirituality. 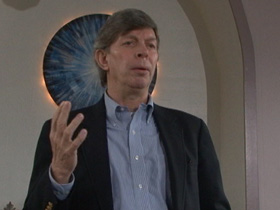 PASTOR DON MACKENZIE (speaking to retreat group): “By whatever name you might call the Holy One of Being…”

SEVERSON: And many inside and outside of church are finding it with the help of a spiritual director, someone to listen and offer guidance in the quest for the experience of God’s presence. Sometimes it’s in groups, like this retreat. Most often it’s one on one and deeply personal.

Attendee speaking to retreat group: “And I’m finding that that’s not a real serene place to be…”

LIZ BUDD ELLMANN (Executive Director, Spiritual Directors International): It isn’t as though one has to meet with a person as a spiritual director in order to know the spiritual journey, but it sure helps.

SEVERSON: Liz Ellmann is the executive director of Spiritual Directors International, which has a worldwide membership of 7,000, a number that has been expanding rapidly.

SEVERSON: The first step to what some call a personal experience of the holy, most agree, is to find a state of tranquility and silence. These two women, both spiritual directors, invited us to observe the process, or what they call “the journey.” 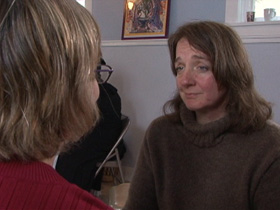 Woman speaking during spiritual direction session: “During the day sometimes when I’m feeling kind of chaotic or pulled in too many different directions, I’ve come up with a simple gesture that reminds me to center, to quiet, to quiet…

SEVERSON: Not surprisingly, with the upsurge of those seeking a spiritual connection there are an increasing number of courses around the country for spiritual directors in training, like this one at Seattle University. It is not a lucrative undertaking. Many don’t charge for their services. Some may ask for a donation to a religious or humanitarian organization. For those who charge, the rates vary from around $25 to $60 an hour.

ELLMANN: Many people seek a spiritual director when there is something tragic that’s happened in their life. They’re trying to make sense out of it. Where is God in all of this? And so they reach out to meet with a spiritual companion, a spiritual director, to journey with them into what is the deeper meaning.

SEVERSON: Ellmann knows about overcoming tragedy with some spiritual guidance. Her journey began after she was almost killed in a car accident, then survived a brain tumor. As head of Spiritual Directors International, she is often invited to explain the role of the spiritual director, as she did when she attended the spiritual direction retreat at this Interfaith Community Church in Seattle.

ELLMANN (speaking to retreat group): “So I’m going to talk about prayer first as these three chairs…”

SEVERSON: She explains there is a person in one chair who is a spiritual director, and there’s a person in the second chair who’s coming with a story of what is going on in their spiritual life. 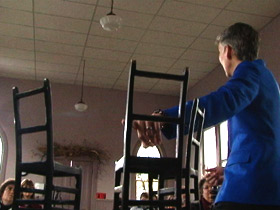 ELLMANN (speaking to retreat group): “There is an understanding that there is a third chair always present. God is in that third chair.”

SEVERSON: This retreat, over a series of Saturdays, was organized by one of the directors in Liz’s organization, Sheikh Jamal Rahman.

SHEIKH JAMAL RAHMAN (speaking to retreat group): “As we allow this to just sink within us, just end with a chant, Allahu Allah.”

SEVERSON: Sheikh Rahman is a respected scholar and teacher in the mystical branch of Islam known as Sufism. At this retreat, he is getting some help from two other spiritual directors—Don Mackenzie, a retired minister for the United Church of Christ, and Ted Falcon, a rabbi.

RABBI TED FALCON: I think more and more people are—have greater degree of awareness that the path exists within them. The institution has a tendency of protecting us from the immediacy of the spiritual encounter.

MACKENZIE (speaking to retreat group): “What are we doing here? What’s it about?”

SEVERSON: Pastor MacKenzie says the tradition of seeking help from a spiritual director is ancient, and historically it’s been people active in their faith who have been doing the seeking.

MACKENZIE: People are feeling there’s an emptiness, and how is it that we can get back and claim the substance that comes through our traditions in a way that moves toward healing, that fulfills us, that makes us better citizens, that—and so forth.

SEVERSON: Searchers say they sometimes feel closer to God when they’re not in church. That would apply to Sally Marquis. She also thinks her engineering and science background may have jaded her faith. 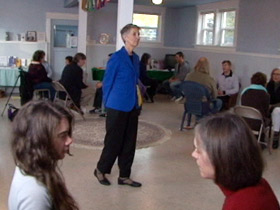 SALLY MARQUIS: This whole idea of prayer was so alien to me that I had no idea how to start.

SEVERSON: At this retreat, they are practicing prayer techniques that spiritual directors say are universal, that help clear the mind of distractions.

ELLMANN (speaking to retreat group): “Was it easier to be the speaker or the listener and be conscious of your breathing? How was that?”

Attendee speaking at retreat: “When I just noticed how I was breathing as opposed to trying to breath in some way, then it was very easy to engage.”

ELLMANN (speaking to retreat group): “Listen with the attention that I was hearing going on over here, of not only your ear, but your eyes and your heart and breath.”

SEVERSON: Liz Ellmann explains one way to clear the mind in this exercise designed to focus on the act of breathing.

ELLMANN: Breathing is one of the most basic prayers. God gives us breath. We are so close to God, we’re as near as our breath.

RAHMAN (speaking to retreat group): “And then once again you make a commitment to really submit your attachment to your ego to God.”

SEVERSON: At this spiritual retreat, they learn how different faith groups reach out to God, including the Muslim prayer of Salat, always facing Mecca five times a day. 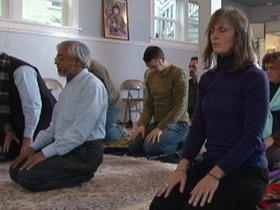 RAHMAN: An Islamic prayer is essentially about praising God and thanking God, and when we bow to God, the wonderful saying is: one prostration of prayer to God liberates you, frees you, from a thousand prostrations to your ego.

SEVERSON: The Sufi’s whirling dervish, performed here by Reverend Karen Lindquist, the Interfaith Church’s co-founder, is also a mode of prayer, although it requires a life-long commitment.

FALCON: One of the benefits of ritual is it gives us a form, for example, the ritual of prayer. But every ritual that we do in our lives also has us going on automatic. So there comes a time where I might be doing it outwardly, I might be saying the words, but I’m no longer conscious of them.

Woman speaking at retreat: “Months later, I realized it was an act of surrender to God, that my life is not in my own hands.”

SEVERSON: A common theme among spiritual directors is that first it’s necessary to value and love oneself as God’s creation.

MARQUIS: So what I’ve been doing is using the Buddhist prayer to quiet me down, quiet my thoughts down and open myself up, and then the Sufi prayer to just reassure and love my own heart so that I can feel really full and complete, and then from that place I can pray for people that are struggling, people that are sick, people that I feel like need some extra love.

SEVERSON: Even Sister Joyce Cox, in describing her method of personal or centered prayer, finds herself borrowing the language originally of the ancient Indian Vedic tradition.

COX: What I do in centering prayer is I choose a mantra, which is my sacred word, doesn’t have to have any meaning for me. What I simply do is return to that sacred word as a method of intention and just sit.

SEVERSON: Liz Ellmann says it’s a sign of our times that so many people have turned from searching for material things to the pursuit of spirituality, and, she says, it’s a good thing.